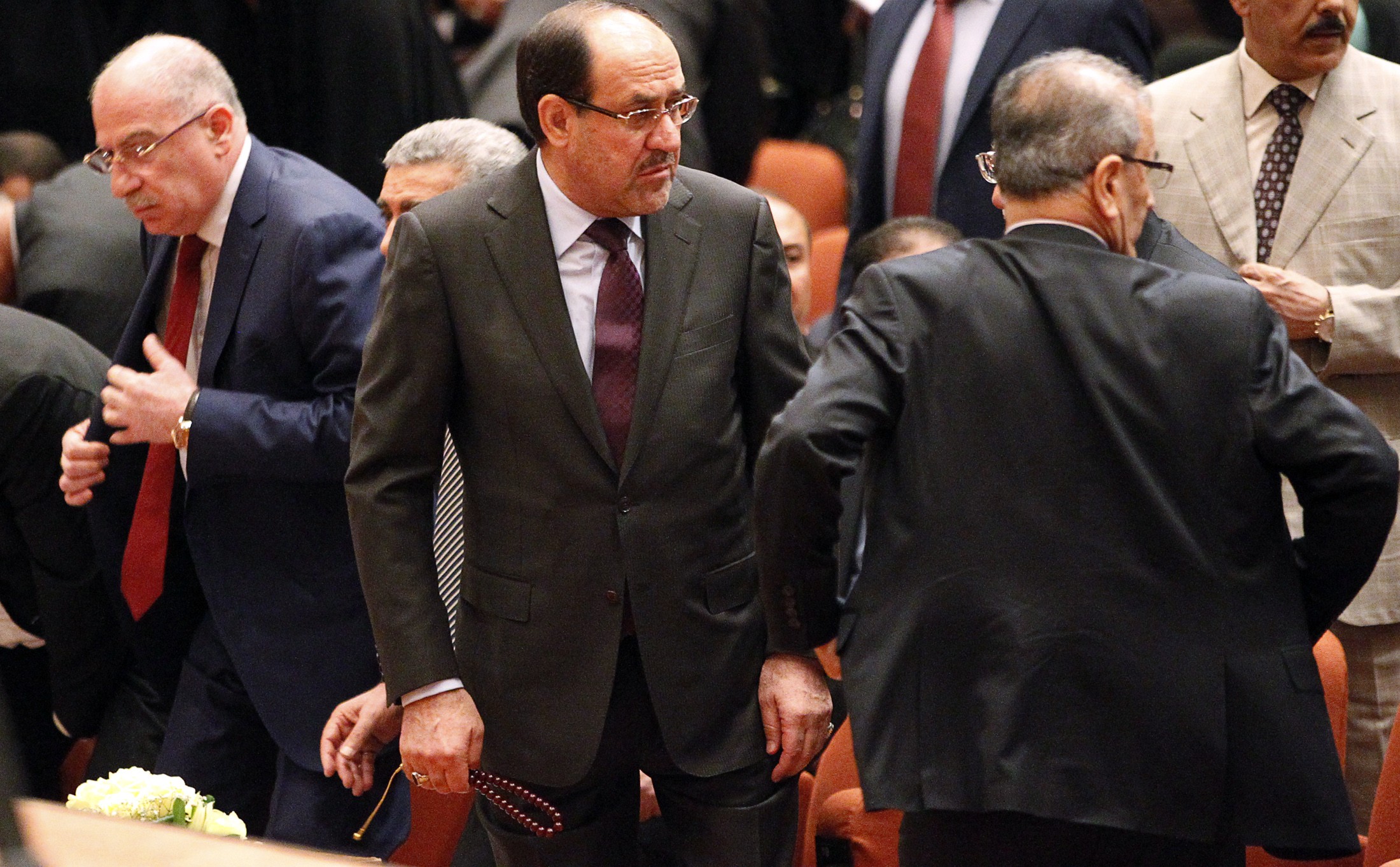 BAGHDAD -- Iraq's embattled prime minister vowed Friday to fight until the Islamic militants who have overrun much of the country are defeated, suggesting he won't step down despite pressure for him to do so.

Framing the debate over his future in democratic terms, Nouri al-Maliki sought to remind Iraqis - including his political rivals - that voters handed his State of Law bloc the most seats in parliament in April elections, and that he must "stand by them during this crisis that Iraq is passing through." His bloc won the most seats but failed to gain a majority, meaning he needs allies in order to form a government.

The Sunni insurgent blitz that began early last month and swept across much of northern and western Iraq has been fueled in part by grievances among the country's Sunni Muslim minority with al-Maliki and his Shiite-led government. Al-Maliki, who has held the post since 2006, is being pressed to step aside, with even some of his former allies blaming his failure to promote reconciliation for fueling Sunni support for the insurgency.

Iraq's top Shiite cleric, Ayatollah Ali al-Sistani, has even pressed lawmakers to quickly form a new government that can confront the militant threat and unite the country. Lawmakers failed in their first session of parliament on Tuesday to make any progress.

On Friday, al-Sistani lamented the inability of political leaders to quickly agree on a new prime minister, describing it as "a regrettable failure" and urging them to redouble their efforts to form a new government that can lift the country out of its crisis, a cleric who represents him told worshippers in a Friday sermon in the holy city of Karbala.

But al-Maliki's statement issued Friday suggested that he intended to fight any attempt to find a replacement for him, and he vowed to remain until the insurgents are defeated.

"Pulling out of the battlefield while facing terrorist organizations that are against Islam and humanity would show weakness instead of carrying out my legitimate, national and moral responsibility," al-Maliki said. "I have vowed to God that I will continue to fight by the side of our armed forces and volunteers until we defeat the enemies of Iraq and its people."

In Washington, lawmakers of both parties increasingly say al-Maliki needs to depart from office if there's any chance of a political reconciliation to stabilize the country.

Also Friday, more than 40 Indian nurses who were trapped in territory captured by Islamic militants crossed into Iraq's largely autonomous Kurdish region Friday and will be under the protection of local security forces until flying home later in the day, authorities said.

The nurses had been stranded for more than a week at a hospital in the Iraqi city of Tikrit, which Sunni militants, including fighters from the Islamic State of Iraq and Syria (ISIS) extremist group, captured last month. Officials say the nurses were moved this week to the militant-held city of Mosul farther north.

Nawaz Hadi, the governor of Irbil province in the self-rule Kurdish region, said the nurses arrived at a checkpoint and were being cared for by the Kurdish militia fighters, known as peshmerga.

"All the nurses are safe with the peshmerga in Irbil," Hadi told The Associated Press. "After this, they will travel to the airport in Irbil and return home. They are very tired."

Earlier Friday, chief minister of Kerala state in India, Oommen Chandy, said the nurses would return to the southern Indian city of Kochi on a special aircraft arranged by the Indian government.

It remained unclear whether the nurses had been held by the extremist group or were just stranded in their territory. Neither Indian nor Iraqi officials have offered details.

According to the Indian Foreign Ministry, 39 Indian construction workers were abducted two weeks ago near Mosul and were being held by the militants, but were safe and unharmed.

About 10,000 Indians work and live in Iraq, but only about 100 are in violent, insecure areas.

On Thursday, the Islamic State group released 32 Turkish who were captured in Mosul. The group still holds nearly 50 people who were seized at the Turkish consulate in the city last month.

The push through Awja is part of an ongoing military offensive that ultimately aims to retake Tikrit.

Fighters from the Islamic State group have been trying for weeks to capture the Beiji facility, located some 250 kilometers (155 miles) north of Baghdad. The group appeared on the verge of taking the refinery last month, but military troops managed to hold on and have since received reinforcements to help bolster their defenses.

A government plane targeted around eight vehicles attacking government forces at the facility north of Baghdad early Friday morning, said Sabah al-Nuaman, the spokesman for Iraq's counterterrorism services. He said up to 30 militants were killed.

Al-Nuaman also said a helicopter gunship hit a house in the town of Qaim near the Syrian border where a gathering of the Islamic State group's local leaders was taking place. He said there were several casualties, but did not have a concrete figure.

The militants took control of Qaim, which controls a border crossing with Syria, last month during their blitz across Iraq, and now control a vast stretch of territory straddling the two countries.