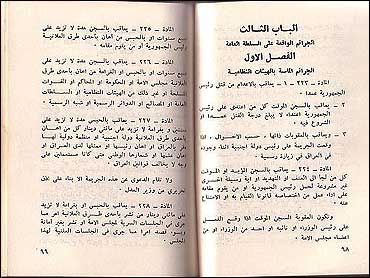 Iraq's parliament ended weeks of debate Sunday and passed a long-delayed law paving the way for the planned January election to go forward, sidestepping a crisis that could have delayed the U.S. troop withdrawal.

The decision appeared to resolve a key sticking point — who will be allowed to vote in the disputed, oil-rich city of Kirkuk. The issue had threatened to delay Iraq's key parliamentary elections, which in turn would affect how quickly American combat forces could leave the country.

In a sign of how intensely Washington was following the debate, U.S. Ambassador Christopher Hill could be seen shuttling between various political factions before the law's passage. President Barack Obama, speaking at the White House, welcomed the new legislation.

"This is an important milestone as the Iraqi people continue to take responsibility for their future. I want to congratulate Iraq's leaders for reaching this agreement," Obama said. "The United States will continue to stand with Iraq as a strong partner and as a friend."

Iraq's prime minister, Nouri al-Maliki, in a statement posted on his Web site, hailed the election law's passage as a "historic victory of the will of the people," and described it as a strong response to the people who are trying to undermine the country's security.

The U.S. ambassador, speaking to reporters after the vote, said the American troop drawdown will proceed as scheduled. Military commanders have said the U.S. troop withdrawal would start in earnest about 60 days after the vote, the idea being that the country would be on stable footing by then.

"What is important is that with the election law, we are very much on schedule for the drawdown," Hill said.

Under the president's plan, all U.S. combat troops will be out of the country by the end of August 2010, leaving about 50,000 trainers and support troops, who in turn would leave by the end of 2011.

It was not clear exactly when the election would be held — Jan. 16 as originally planned or a later date in January. The head of the Independent High Electoral Commission, Faraj al-Haidari, told The Associated Press that he expected the vote to be held within a week of Jan. 16.

Deputy Parliament Speaker, Khalid al-Attiyah said it would likely be held January 21 or 23. The Iraqi constitution mandates that the vote takes place in January, but does not specify which day.

Once the legislation is approved by the president and his two vice presidents, the election commission will decide how many days are needed to hold the vote, al-Haidari said. Then the commission will send a letter to parliament and to the prime minister to inform them of their decision.

The law's passage had been repeatedly delayed by sharp disagreements over how voting would take place in the northern city of Kirkuk, claimed by both Arabs and Kurds and a major flashpoint in the country.

Kurds consider Kirkuk a Kurdish city and want it part of their self-ruled region in northern Iraq. During the rule of former dictator Saddam Hussein, tens of thousands of Kurds were displaced under a forced plan by Saddam to make Kirkuk predominantly Arab, though many of these have since returned.

The Arab-led central government vehemently opposes anything that would remove Kirkuk from its control.

Under the legislation passed Sunday, the vote in Kirkuk would be held just like in other regions around the country, but the votes — and those in other disputed areas — could be subject to a special review if it is determined that there was a large population increase. Arabs and the Turkomens claim Kurds have packed the city with immigrants to tip the balance in their favor.

The legislation did not include any guaranteed seats for Arab and Turkomen lawmakers from Kirkuk, something which had been discussed in earlier versions.

Both Kurds and Arabs appeared to claim victory after the sometimes raucous parliament session that was televised live on Iraq state TV.

"This is a good law because it occurred after broad agreement, and it presents a solution to a problem that we have now solved. It doesn't achieve all our (Kurdish) ambitions, but it achieves a balance," said Mahmoud Othman, a Kurdish lawmaker.

But Omar al-Jabouri, a Sunni member of parliament, called the voting "a great victory," because, he said, Kurds were forced to accept special circumstances in regards to the Kirkuk voting.

The law passed with 141 votes, but it was not immediately known how many of the parliament's 275 members voted against the legislation or even attended the session. Low turnouts are common in Iraq's parliament, which often does not have enough people to form the necessary 138-person quorum.

"It's a good step that we have a resolution to this and have elections," said Michael Wahid Hanna, an analyst at the New York-based Century Foundation.

However, he added that the disputes such as the long-brewing debate over the election law, have paralyzed Iraq's political process and "have shown that it's incapable of solving the big questions," such as how to deal with disputed territories.