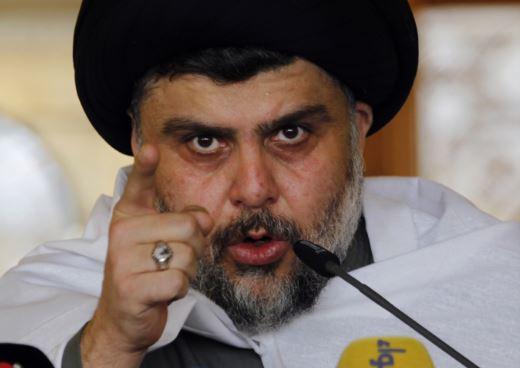 BAGHDAD -- The political coalition of influential Shiite cleric Muqtada al-Sadr took an early lead in Iraq's national elections in partial returns announced late Sunday by the Iraqi electoral commission. An alliance of candidates linked to Iraq's powerful Shiite paramilitary groups was in second. The alliance is headed by Hadi al-Amiri, a former minister of transport with close ties to Iran who became a senior commander of paramilitary fighters in the fight against the Islamic State of Iraq and Syria (ISIS) extremist group.

Prime Minister Haider al-Abadi performed poorly across majority Shiite provinces that should have been his base of support.

The announcement came just over 24 hours after polls closed across the country amid record low voter turnout. It included full returns from only 10 of the country's 19 provinces, including the provinces of Baghdad and Basra.

Members of the national election commission read out vote tallies for each candidate list in each of the 10 provinces on national TV. By the end of the announcement, al-Sadr's list had the highest popular vote, followed by al-Amiri's.

Seats in parliament will be allocated proportionately to coalitions once all votes are counted. The commission gave no indication on when further results would be announced.

Who is Muqtada al-Sadr?

Celebrations erupted in Baghdad's Sadr City, an impoverished quarter that is home to some 3 million people and is named after the cleric's late father, Ayatollah Mohammad Sadq al-Sadr. The younger al-Sadr campaigned on a cross-sectarian platform of fighting corruption and investing in services and struck a surprising alliance with the Communist Party in the capital.

The strong showing could be a testament to al-Sadr's loyal base of followers who cast their ballots despite a general mood of apathy that kept many Iraqis away from the polls. Al-Sadr commanded fighters in the war against ISIS and headed a powerful militia that fought U.S. forces in Iraq prior to 2011, but his 2018 campaign focused on social issues and eliminating government corruption.

Al-Sadr rose to prominence as a young cleric, not even 30 years old, after the Iraq descended into sectarian warfare following the U.S. toppling of Saddam Hussein's government in 2003.

"60 Minutes" correspondent Bob Simon was the first to interview al-Sadr for Western television. Simon explained that the cleric's rise was fuelled by years of Shiite resentment toward the U.S.

After Saddam Hussein surrendered in the first Gulf War in 1991, President George Bush (the first) sent a clear message to Iraq's Shiites; He said it was time "for the Iraqi people to take matters into their own hands and force Saddam Hussein, the dictator, to step aside."

The Shiites heeded the call. But when they were in full rebellion against Saddam, the American air cover they expected never came. Moreover, the U.S. let Hussein use his own helicopter gunships to crush the revolt. Shiites were killed by the thousands.

"The Americans were never interested in what was best for the Shiites," al Sadr told Simon in the 2004 interview. "In fact, America wouldn't let a Shiite government exist here, except under its occupation, my friend, because of that fear."

"The little serpent has left, and the great serpent has come," al-Sadr told Simon of the toppling of Saddam Hussein.

So the big serpent was Saddam Hussein, and the Americans are the small serpents?

"Just because we're rid of Saddam and the evil Batthists doesn't mean the occupation is a good thing. Our salvation from Saddam was only with the grace of God."

If getting rid of Saddam was a favor of God, why was it that God waited until the Americans came in to do the job?

"All praises to Allah! He works in mysterious ways," said the cleric.

It's that sort of radical, mystical sentiment that galvanized masses of poor, mostly uneducated Shiites in the Iraqi slums and inspired them to back the al-Sadr, and his supporters were enthusiastic, and well-armed.

The powerful cleric's militias went on to launch a bloody fight against American forces at the height of the insurgency following Hussein's ouster. Then he reinvented himself as a political player -- and a major problem for Iraq's government.

As the war in Iraq -- at least the U.S. role in it -- shifted a decade later into a fight against the Sunni militants of ISIS, al-Sadr's forces battled effectively against them in his Shiite stronghold.

In 2016, furious over corruption in the Sunni-led government and its inability to protect Shiite areas from ISIS attack, al-Sadr's followers stormed the Green Zone in central Baghdad -- the fortified neighbourhood home to the government, the U.S. Embassy and dozens of other high-value targets. The following week they threatened to storm the area again if their demands weren't met.

Long a powerful force, with this year's elections, al-Sadr appears to be cementing his role as a prominent player at the highest level of Iraq's still-young democratic politics.

Current Prime Minister al-Abadi sought to retain his post after overseeing the military defeat of the ISIS movement, but he faced stiff competition from his predecessor, Nouri al-Maliki, as well as al-Sadr and the Fatah alliance of candidates with paramilitary ties.

Many of the candidates on Fatah were militia commanders before they cut their official ties with the force in order to seek office.

Fatah's strong result will be seen as a victory for Iran as it seeks to protect its interests in Iraq, including the militias it finances and has sometimes directed to fight alongside its forces in Syria.

The elections held Saturday were the first since Iraq declared victory over ISIS fighters and the fourth since the 2003 U.S.-led toppling of Saddam Hussein. Officials said turnout was only 44 percent, the lowest ever since Saddam's ouster.

Any political party or alliance must gain a majority of Iraq's 329 seats in parliament to be able to choose a prime minister and form a government. Dozens of alliances ran for office in these elections and months of negotiations are expected before any one alliance can pull together the 165 required seats.

Until a new prime minister is chosen, al-Abadi will remain in office, retaining all his power.

The constitution sets a quota for female representation, stating that no less than one-fourth of parliament members must be women. Nearly 2,600 women are running for office this year.