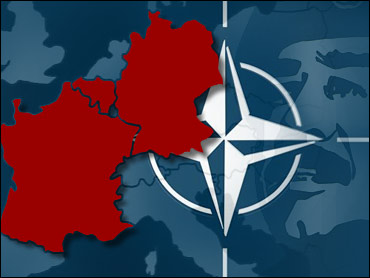 Iraq reversed its opposition to U-2 surveillance flights over its territory on Monday, while a rift deepened within NATO over how the alliance should respond to the threat of a possible war.

The Bush administration brushed aside the Iraqi concession on surveillance flights as too little, too late. "The bottom line is the president is interested in disarmament. This does nothing to change that," said White House spokesman Scott McClellan.

Iraq's acceptance of the U-2 flights, as well as its submission of new documents to the United Nations over the weekend, came as Europe's split with America over the use of military force intensified. France, Germany and Belgium vetoed a U.S.-backed measure to authorize NATO to make plans to protect Turkey in the event of attack by Iraq.

Turkey responded by invoking a clause in NATO's mutual defense treaty requiring immediate consultations. It was the first time in 53 years that a member of the Atlantic alliance publicly activated the emergency measure.

President Bush said the decision by France, Germany and Belgium to deny Turkey NATO protection against Iraq threatens to hurt the Western alliance.

"Upset is not the proper word," he said when reporters asked for his views on France's diplomacy. "I am disappointed that France is willing to block NATO from helping a country like Turkey to prepare."

Mr. Bush added, "I think it affects the alliance in a negative way when you're not able to make a statement of mutual defense."

The NATO decision was followed later Monday by a joint declaration in Paris in which Russia joined France and Germany in calling for strengthened U.N. weapons inspections in Iraq. Russian President Vladimir Putin chose his words carefully, saying "We are against the war. ... At the moment, that's the view I have."

White House officials say they have no hope of convincing Germany to change its mind, and earlier optimism that France may be willing to join the U.S. has all but evaporated, making it appear ever more likely that if the U.S. wants to go to war soon it will be without the U.N.

In Washington, Defense Secretary Donald Rumsfeld said the United States and the 16 other countries in the alliance would go ahead with planning "outside of NATO if necessary.

The French and German view is that Turkey does not need the equipment now, and that planning for Turkey's defense now could send the wrong signal.

NATO's military commanders say the planning for the limited support for Turkey can be wrapped up within a few days once they get the go-ahead, but actual deployment of the NATO units, including AWACS planes and Patriot missile defense systems, will need further approval from the 19 allies and could take up to a month.

NATO Secretary-General Lord Robertson said talks would resume Tuesday morning and, in a pointed warning to the three holdouts, hinted at serious risks to the 19-member alliance's solidarity.

"The longer this dispute goes on, the worse it is going to be for the alliance, and for them," Robertson warned.

No Iraqi official would say so openly, but there's little doubt some satisfaction is being taken in Baghdad over the open squabble in NATO, reports CBS News Correspondent Mark Phillips.

And there's a feeling as well that the strategy of making incremental concessions to the U.N. arms inspectors – like Monday's agreement to finally allow U-2 surveillance flights – is paying off, at least in the short term.

"The inspectors are now free to use the American U-2s as well as French and Russian planes," Mohamed al-Douri, Iraqi ambassador to the United Nations, said Monday in New York.

Chief U.N. weapons inspectors Hans Blix and Mohamed ElBaradei have said they sensed a positive Iraqi attitude during weekend talks in Baghdad though they acknowledged they had achieved no "breakthrough."

Now that Iraq has given its consent, the high-flying planes can operate over the country with Baghdad's permission and provide its findings to U.N. inspectors.

Iraq had objected to such flights as long as U.S. and British jets continued patrols in the "no-fly" zones.

On Monday, U.S. and British bombed a surface-to-air missile site Monday in the southern no-fly zone, the U.S. military said. The Iraqi News Agency reported two civilians were killed and nine others were wounded.

In Washington, State Department spokesman Richard Boucher described the Iraqi moves as tactical retreats. He said Iraq still had not indicated whether it would comply quickly and fully with U.N. disarmament demands.

Britain's U.N. ambassador, Jeremy Greenstock, said Iraq's latest moves indicated "some progress on procedure" but "that doesn't add up to the real change in Iraq's attitude that we're looking for."