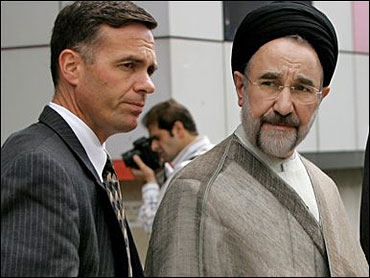 This column was written by Farhad Mansourian.

The U.S. decision to enable former Iranian President Muhammad Khatami to visit Washington to discuss "Civilization and Tolerance" is an unfortunate reflection of the Bush administration's continuing confusion about Iran.

The Islamic Republic has convinced successive U.S. administrations that there is a dichotomy in Iran between reformers and hardliners and that, if only Washington would engage the former, they might nudge Tehran toward moderation. There is a dichotomy in Iran, but U.S. officials constantly get the sides wrong. The division within Iranian society is not between hardliners and reformers, but rather between regime and the population.

The Islamic Republic is neither democratic nor capable of reform. This fact is inherent in its constitution. Reform can occur only if unelected officials and the Supreme Leader agrees. It is unlikely that he would ever agree to a reduction of his power. So-called moderates may talk about cosmetic changes, but they neither oppose the theocracy nor the export of revolution.

The White House should not be fooled. The visit from Khatami is the latest reflection of the Islamic Republic's "good cop, bad cop" strategy. The idea is that while President Mahmud Ahmadinejad speaks about "wiping Israel and the United States off of the map," Washington should seek dialogue with more "moderate" former president Khatami. It is meant to buy time. Unfortunately, the State Department has once again taken the bait.

Khatami portrayed himself for eight years as a "reformist." During this time, he built up the nuclear program that is now threatening global peace. Khatami and his administration are responsible for the murders of opposition leaders and their families, the crushing of the student rebellions, and the disappearance of many journalists.

On December 2, 2002, President Bush said: "My thoughts and prayers are with the Iranian people, particularly the families of the many Iranians who are in prison today for daring to express their hopes and dreams for a better future. We continue to stand with the people of Iran in your quest for freedom, prosperity, honest and effective government, judicial due process and the rule of law."

The problem is, after living more than a quarter-century under a theocratic dictatorship, many Iranians think talk is cheap. They view Khatami's visit to the United States as evidence that the president is not serious about support for freedom-aspiring Iranians. So why the visit? Many Iranians might spin wild conspiracy theories; it is a national pastime. But, regardless of the reason, Khatami's visit is the result of Washington's failure to have a clear policy for how to deal with the Islamic Republic of Iran. The White House should stop merely reacting to Tehran's moves, and instead lead. If it is to pursue dialogue, that dialogue needs both purpose and moral clarity. Its goal should be to bring democracy and human rights to Iran.

Bush needs to be true to his March 7, 2006 statement, "We have made it very clear that we stand with the Iranian people who have democratic aspirations. The Iranian people want to chart their own future, and we stand firmly with them."

By Farhad Mansourian
Reprinted with permission from National Review Online

CBS News study: Most don't want voting to be harder, see power at stake
Thanks for reading CBS NEWS.
Create your free account or log in
for more features.
View CBS News In
CBS News App Open
Chrome Safari Continue
Be the first to know
Get browser notifications for breaking news, live events, and exclusive reporting.