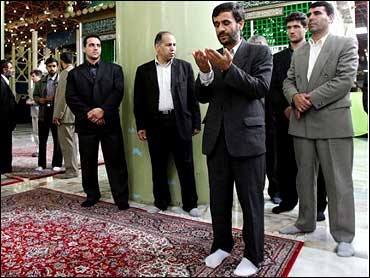 "Iran's peaceful technology is the outcome of the scientific achievements of Iran's youth. We need the peaceful nuclear technology for energy, medical and agricultural purposes and our scientific progress. We will continue this," the ultraconservative Ahmadinejad told his first news conference since being elected on Friday.

Ahmadinejad said Iran will continue nuclear talks with the Europeans but said they must implement their commitments if they want trust to be established.

"We will continue talks with Europeans while preserving our national interests and insistence on the right of the Iranian nation to use nuclear energy," he said in the news conference, broadcast live on state-run television.

"The Iranian nation is taking the path of progress based on self-reliance. It doesn't need the United States significantly on this path," he said.

Ahmadinejad said he would seek to improve relations with other countries.

"We will pay attention to improving relations with any country that doesn't seek hostilities against Iran," he said.

France, Britain and Germany have been negotiating with Iran on its nuclear program, offering economic incentives in the hope of persuading the country to permanently halt uranium enrichment.

Iran suspended all uranium enrichment-related activities in November to avoid having its nuclear program referred to the U.N. Security Council for possible sanctions. Uranium enriched to low levels has energy uses, while highly enriched uranium can be used in bombs.