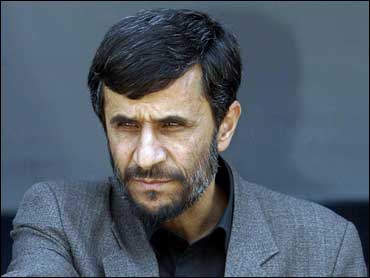 Iran slowed uranium enrichment over the past month but picked up the pace on the day it received a six-power offer package of rewards meant to persuade it to give up the technology, which could be misused to make nuclear arms, the U.N. nuclear agency said Thursday.

A report from the International Atomic Energy Agency also indicated that nuclear inspectors have made little progress on clearing up other worrying aspects of Tehran's past nuclear activity.

Meanwhile, Iran's President Mahmoud Ahmadinejad said Thursday that his country is ready to discuss "mutual concerns" over its nuclear program and claimed the West had given in to the will of the Iranian nation.

"International monopolists (the U.S. and its allies) have been defeated in the face of your resistance and solidarity and have been forced to acknowledge your dignity and greatness," Ahmadinejad said in a speech before thousands of people in Qazvin, west of Tehran.

Specifically, the three-page report said Iran still had declined to answer requests to clarify statements by Ahmadinejad that his country had experimented with advanced centrifuges that speed up enrichment,

Iran also has refused to provide extra information on a document showing how to compress fissile material into the shape of warheads, said the confidential report circulated among the IAEA's 35 board member nations and made available to The Associated Press.

It declined also requests for key interviews with nuclear officials linked to potentially worrying finds by IAEA inspectors, and had not met additional requests for more information on an experimental enrichment project and tests and documents that could have nuclear weapons applications.

A senior U.N. official familiar with the report, who demanded anonymity in exchange for discussing its confidential contents, said it contained nothing that significantly hardens or diminishes concerns about its nuclear ambitions since the last IAEA report in late April.

The report, by IAEA chief Mohamed ElBaradei, was prepared for Monday's board meeting of the agency and amid delicate diplomatic maneuvering by six world powers focused on enticing Tehran into negotiations aimed at ultimately persuading it to give up enrichment domestically.

EU foreign policy chief Javier Solana on Tuesday gave Iranian officials a package of potential rewards if Tehran meant to persuade the Islamic republic to negotiate on enrichment and other nuclear issues.

Initial reaction from Tehran has been low-low key but mixed, with Iranian officials saying they would look at the proposals but indicating they were not prepared to give up enrichment totally.

Still, Iran's nuclear officials chose that day to crank up their enrichment program after a month of low-key activity, said the report, feeding uranium gas into the same 164-machine centrifuge facility that they initially used to produce small qualities of enriched uranium in late April, said the report.

It was unclear if there was a link between the Solana visit and the decision to increase enrichment activity on the same day.

While the report said that "Iran is continuing work" on setting up enrichment facilities in addition to one it used to process uranium gas through 164 centrifuges in April, it suggested such activities had slowed before Tuesday and were restricted to smaller centrifuge configurations.

While the slowdown could reflect a decision by Iran to send a positive signal to the six nations hoping for new talks on the issue, the senior U.N. official said other reasons — including possible technical difficulties — could have accounted for the lessened enrichment activity.

Iran says it wants to enrich uranium only to generate nuclear power, but the United States and other nations say Tehran is interested in enrichment's other application — the creation of weapons-grade uranium used in nuclear warheads.

Ahmadinejad did not say whether Iran accepted the Western proposal for resuming negotiations.

"On behalf of the Iranian nation, I'm announcing that the Iranian nation will never hold negotiations about its definite rights with anybody, but we are for talks about mutual concerns to resolve misunderstandings in the international arena," Ahmadinejad told thousands of people in Qazvin.

Diplomats and officials say world powers are prepared to compromise on a long-standing demand that Iran commit to a prolonged moratorium on uranium enrichment and now are asking only for suspension during talks on Tehran's nuclear program.

That proposal — and a connected offer to allow Iran to continue with uranium conversion, which is linked to enrichment — was the latest in a series of concessions meant to entice Iran into starting talks and to defuse the possibility of U.N. sanctions if it remains defiant.

Such changes to the previous stance on enrichment signal a possible readiness by the United States and key allies to accept some limited form of the activity, despite years of warnings from Washington that Tehran was seeking the technology to make nuclear arms.