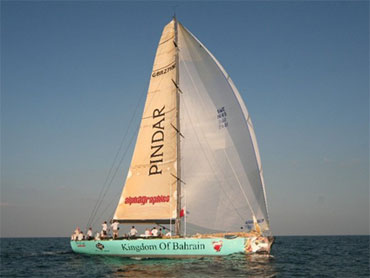 Iran is holding five British sailors after stopping their racing yacht in the Persian Gulf, the British government said Monday. The move could heighten tensions between Iran and major world powers, including Britain, that are demanding a halt to its nuclear program.

Oil prices spiked 2 per cent to $77.45 a barrel on the New York Mercantile Exchange as the news broke.

The yacht owned by Sail Bahrain was stopped on its way from the tiny island country to the Gulf city of Dubai on Wednesday when it "may have strayed inadvertently into Iranian waters," Britain's Foreign Office said. Sail Bahrain's Web site identified the yacht as the "Kingdom of Bahrain" and said it had been due to join the Dubai-Muscat Offshore Sailing Race, which was to begin Nov. 26.

The event was to be the boat's first offshore race, the Web site said, adding that the vessel had been fitted with a satellite tracker.

Attempts to reach representatives of the raceboat's owner were not immediately successful.

"I hope this issue will soon be resolved," Miliband said in the brief statement.

The statement added that the crew members "are still in Iran" and were "understood to be safe" but did not specify whether they are and what their legal status is. Calls seeking clarification from Britain's Foreign Office was not immediately returned.

An Iranian Foreign Ministry official said he was not aware of reports a British yacht had been stopped. He spoke on condition of anonymity because he was not authorized to talk to the press.

Iran's elite Revolutionary Guard has the responsibility for protecting Iranian waters in the Persian Gulf. Officials from the Guard and from the regular navy could not be reached for comment on Monday.

Iran is holding three young Americans who strayed across the border from northern Iraq in July. The U.S. has appealed for their release, saying they were innocent hikers who accidentally crossed into Iran. Tehran has accused them of spying, a sign that they could be put on trial.

Fifteen British military personnel were detained in the Gulf by Iran under disputed circumstances in March 2007. Iran charged them with trespassing in its waters, and the Iranian government televised apologies by some of the captured crew.

All were eventually freed without an apology from Britain, which steadfastly insisted the crew members were taken in Iraqi waters, where they were authorized to be.

The phone rang unanswered at the Iranian Embassy in London.

Iran's nuclear chief on Monday said U.N. criticism of its nuclear program had pushed his country to retaliate by announcing ambitious plans for more uranium enrichment. With tensions rising over deadlocked negotiations, France said diplomacy was not working and sanctions against Iran were needed.