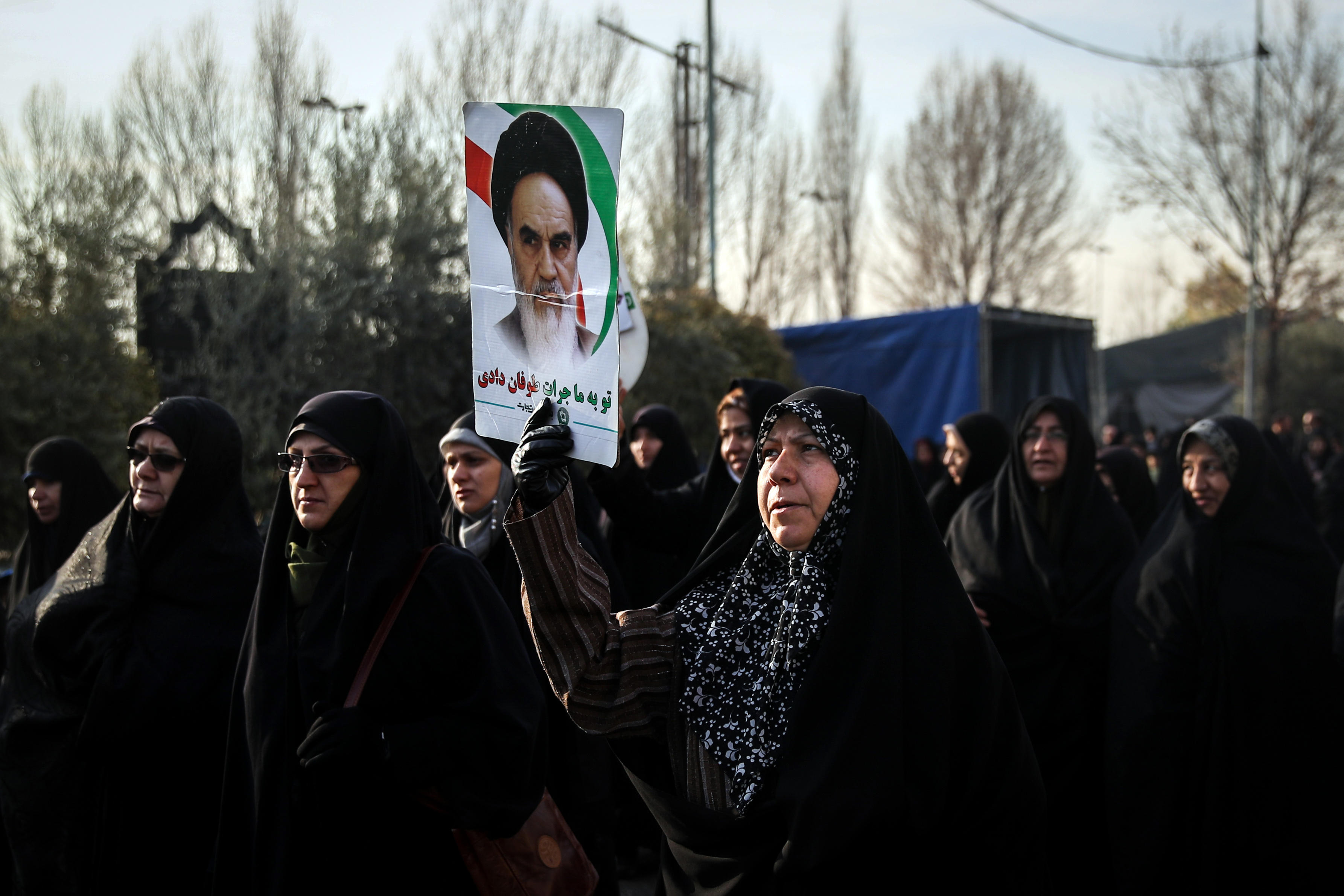 TEHRAN, Iran -- Iranian hard-liners rallied Saturday to support the country's supreme leader and clerically overseen government as spontaneous protests sparked by anger over the country's ailing economy roiled major cities in the Islamic Republic. The demonstrations, commemorating a mass 2009 pro-government rally challenging those who rejected the re-election of hard-line President Mahmoud Ahmadinejad amid fraud allegations, had been scheduled weeks earlier.

However, they took on new importance after the economic protests began Thursday, sparked by social media posts and a surge in prices of basic food supplies, like eggs and poultry. Since then, thousands have gone into the streets of several cities in Iran, beginning first in Mashhad, the country's second-largest city and a holy site for Shiite pilgrims. Demonstrators also have criticized Iran's government during the protests, with social media videos showing clashes between protesters and police.

The semi-official Fars news agency said protests on Friday also struck Qom, a city that is the world's foremost center for Shiite Islamic scholarship and home to a major Shiite shrine.

The number of those said to be participating range from less than 100 in some areas to thousands, although demonstrations do not seem to be taking place on a massive scale, BBC News reports. Still, they appear to be the largest to strike the Islamic Republic since its 2009 Green Movement arose after Ahmadinejad's re-election, The Associated Press reports.

State TV also aired its first reports on the protests Saturday, acknowledging some protesters chanted the name of Iran's one-time shah, who fled into exile just before its 1979 Islamic Revolution.

"Counterrevolution groups and foreign media are continuing their organized efforts to misuse the people's economic and livelihood problems and their legitimate demands to provide an opportunity for unlawful gatherings and possibly chaos," state TV said.

In Tehran, some 4,000 people gathered at the Musalla prayer ground in central Tehran. They called for criminal trials for Mir Hossein Mousavi and Mahdi Karroubi, leaders in the Green Movement who have been under house arrest since 2011. Iranian President Hassan Rouhani, whose administration struck the 2015 nuclear deal with world powers, campaigned on freeing the men, though they remain held.

Mohsen Araki, a Shiite cleric who serves in Iran's Assembly of Experts, praised Rouhani's efforts at improving the economy. However, he said Rouhani needed to do more to challenge "enemy pressures."

"We must go back to the pre-nuclear deal situation," Araki said. "The enemy has not kept with its commitments."

Ali Ahmadi, a pro-government demonstrator, blamed the U.S for all of Iran's economic problems.

"They always say that we are supporting Iranian people, but who should pay the costs?" Ahmadi asked.

But by Saturday afternoon, hundreds of students and others joined a new economic protest at Tehran University. Witnesses said they saw a mass of riot police at the gates of the university while some roads had been blocked off.

Iran's economy has improved since the nuclear deal, which saw Iran limit its enrichment of uranium in exchange for the end of some of the international sanctions that crippled its economy. Tehran now sells its oil on the global market and has signed deals for tens of billions of dollars of Western aircraft.

That improvement has reached the average Iranian, however. Unemployment remains high. Official inflation has crept up to 10 percent again. A recent increase in egg and poultry price by as much as 40 percent, which a government spokesman has blamed on a cull over avian flu fears, appears to have been the spark for the protests.

While police have arrested some protesters, the country's powerful Revolutionary Guard and its affiliates have not intervened as they have in other unauthorized demonstrations since the 2009 election. The economic protests initially just put pressure on Rouhani's administration, but purported footage from recent demonstrations have included anti-government chants.

Interior Minister Abdolrahman Rahmani Fazli urged people "not to participate in these illegal gatherings as they will create problems for themselves and other citizens," BBC News reported.

Early on Saturday, U.S. President Donald Trump tweeted out his support for the protests challenging the government.

"Many reports of peaceful protests by Iranian citizens fed up with regime's corruption & its squandering of the nation's wealth to fund terrorism abroad," he wrote. "Iranian govt should respect their people's rights, including right to express themselves. The world is watching! (hashtag) IranProtests."

It's unclear what effect Mr. Trump's support would have. Iranians already are largely skeptical of him over his refusal to re-certify the nuclear deal. Mr. Trump's insistence in an October speech on using the term "Arabian Gulf" in place of the Persian Gulf also has also riled the Iranian public.

Meanwhile, U.S. Secretary of State Rex Tillerson's comments in June to Congress saying American is working toward "support of those elements inside of Iran that would lead to a peaceful transition of that government" has been used by Iran's government of a sign of foreign interference in its internal politics.