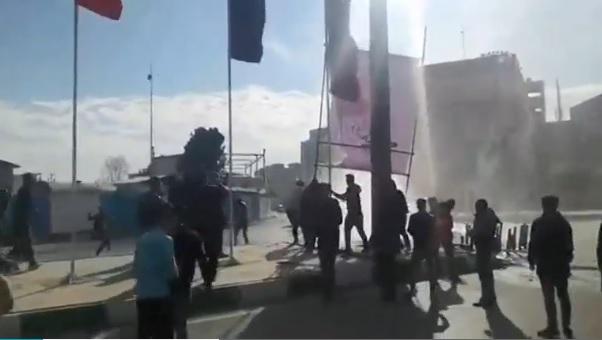 TEHRAN, Iran -- Iranians protesting the country's strained economy gathered in Tehran and another major city on Friday, for the second day of spontaneous, unsanctioned demonstrations placing pressure on President Hassan Rouhani's government. The semi-official Fars news agency reported that officials said around 300 protesters gathered in the western city of Kermanshah, the scene of a devastating earthquake in November that killed over 600 residents.

In Tehran, fewer than 50 people protested at a public square.

Fars reported that protesters in Kermanshah chanted anti-government slogans such as "never mind Palestine, think about us," "death or freedom" and "political prisoners should be freed." They damaged some public property before police dispersed them.

The security deputy of Tehran's governor, Mohsen Hamedani, said that fewer than 50 people gathered at a public square in Tehran, and that most of them left after a police warning but a few decided to stay on.

"A few of them were temporarily arrested," Hamedani said, without elaborating on the exact figure. He added that if people want to show their anger by amassing in large numbers they should seek permission from the authorities first.

Such mass protests without police permission are unusual in Iran and those taking part face arrest.

In the United States, President Trump cheered the protesters in a tweet: "Many reports of peaceful protests by Iranian citizens fed up with regime's corruption & its squandering of the nation's wealth to fund terrorism abroad. Iranian govt should respect their people's rights, including right to express themselves. The world is watching! #IranProtests."

According to BBC News, the demonstrations took Iranian authorities by surprise. These types of rallies tend to be rare in areas where the Revolutionary Guard, along with other intelligence agencies, have control over the population.

Many angry demonstrators had protested in many cities across the country on Thursday, including the second-largest city of Mashhad, over rising food prices and inflation.

Some footage in social media, showed police used water cannon and tear gas to disperse demonstrators, but it could not be verified.

The head of the Revolutionary Court of Mashhad, Hasan Heidari, told Fars that 52 protesters were arrested in Mashhad over their "illegal" gathering on Thursday.

A rally is also planned for Saturday in Tehran to mark the anniversary of massive government-sponsored demonstrations in December of 2009 that followed a crackdown and months of unrest after the contentious presidential elections in June of that year.

This latest wave of protests is placing new pressure on Rouhani as his signature nuclear deal with world powers remains in peril.

The economy has improved since the landmark 2015 nuclear deal lifted sanctions on the country, but the effects have yet to trickle down to ordinary Iranians. The prices of many basic goods, including eggs, have recently increased by 30-40 percent.

According to a BBC Persian investigation, Iranians have become 15 percent poorer in the past 10 years, on average.

Some protestors have also criticized Iran's support of Syrian President Bashar Assad in his country's civil war, in which the Iran's powerful Revolutionary Guard has played a major role.

Iran's senior vice-president Eshaq Jahangiri said Friday that some political factions are using the economy as an excuse to attack the government, pointing to external influences behind the protests. "It seems that there is something behind this issue that must definitely be identified," said Jahangiri. He added that social movements that start on the streets don't always remain under the control of those that started them.

Tehran-based analyst Saeed Leilaz told The Associated Press on Thursday that Rouhani's political rivals may have played a role in organizing the protests.

"The hands of political groups could be seen in (Thursday's) gathering in Mashhad," said Leilaz.