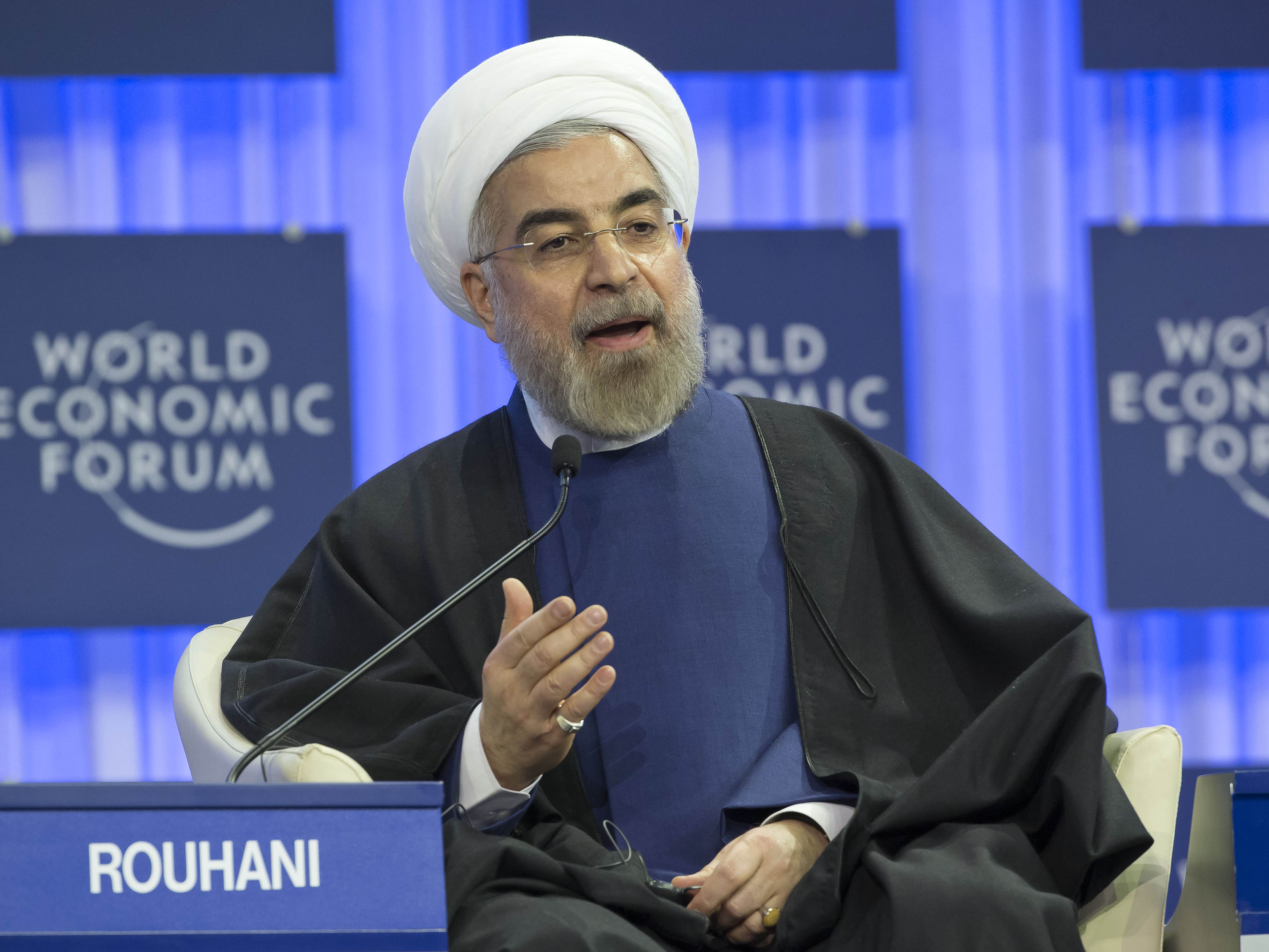 DAVOS, Switzerland - In a charm offensive to the global political and business elite, Iranian President Hassan Rouhani set lofty ambitions for his country, including becoming one of the world's top 10 economies.

Touting the potential investment opportunities of the oil-rich land to the business tycoons in the audience, Rouhani said his country could, with the gradual easing of sanctions, enjoy an economic boom.

And Tehran, he said, is committed to honoring a deal to curb its nuclear program in the hope that will lead to a permanent lifting of economic sanctions, which have battered the Iranian economy over recent years.

"I see the status of Iran pursuing policies of moderation, prudence and hope in the future global economy," said Rouhani. "Iran's economy has so far the potential to be among the world's top 10 in the next three decades."

For 2012, the International Monetary Fund judged Iran to be the 21st biggest economy in the world in terms of annual economic income, or nominal gross domestic product. To get into the top 10 it would have to leapfrog the likes of Switzerland, Turkey and Spain.

Rouhani's attendance was eagerly awaited as it coincided with the lifting of some of the sanctions, as well as the country's exclusion from Syrian peace talks being held just a few hours' drive away.

The forum, which brings together about 2,500 political and business leaders, was the perfect stage for Rouhani to deliver a diplomatic message while seeking to engage with potential investors.

And in an attempt to soften concerns that sanctions will remain a feature of life for Iran, Rouhani emphasized that Tehran will abide by the terms of a deal with world powers to limit its nuclear program. The two sides will try to make the deal permanent over the next six months.

"We intend to reopen trade, industrial and economic relations, with all of our neighbors," Rouhani said.

Iran, he claimed, is "fully prepared and ready to engage with all neighboring countries" to reach solutions on issues including business ventures, environmental concerns, Palestinian rights, Persian Gulf security and Syria's humanitarian crisis.

Iran has huge riches at its disposal, particularly oil and gas, the work force is skilled and the country has untapped potential for tourism.

But the country has largely been cut off from international business since the Iranian Revolution in 1979. The sanctions, which have grown in recent years in response to Iran's nuclear program, have hit the economy hard.

Rouhani said he hopes Iran's historical deep economic ties with Europe will be normalized and suggested that negotiations with the U.S. could pave the way to better relations. He reiterated that Iran has no intention of acquiring nuclear weapons but has the right to continue pursuing nuclear energy for peaceful purposes.

In a sign of the normalization of relations, the International Monetary Fund is sending a mission to Tehran in two days - for the first time in years - for an in-depth review of the economy.

"I am very pleased we can reset the relationship on a sound footing," Christine Lagarde said in a discussion in Davos.

She said she met Rouhani at the United Nations General Assembly in New York last year and found him to be "a sensible policymaker, one that is well-versed in economic matters, who seems to be very much aware of the challenges, who has ambition for a reset of Iran vis-a-vis the rest of the world."

One leader who was not taken in by Rouhani was Israel's Prime Minister Benjamin Netanyahu, who told the forum in a speech of his own that Iran remains a concern across the region, not just for Israel.

"They say they oppose nuclear weapons," Netanyahu said. "Why do they insist on maintaining the ballistic missiles and the plutonium, and the advanced centrifuges that are only used for the production of nuclear weapons?

Netanyahu has been a fierce critic of the U.S.-led efforts to curb Iran's nuclear program, saying they don't go far enough to put the brakes on a country that supports Hezbollah, the militant group that has been vying with Israel for control of the region's power balance.

The Israeli leader also blamed Iran for being involved in the violence in Syria.

"Iran, with the Revolutionary Guards, on the ground in Syria, is facilitating the mass slaughter," Netanyahu said, referring to Iran's elite military unit.

Rouhani suggested that "the best solution is to organize free and fair elections." Iran's Shiite-led government and financial support is central to President Bashar Assad's grip on power.

The Israeli-Palestinian conflict will be another a point of focus of talks at Davos, particularly for U.S. Secretary of State John Kerry, who was also at the event, fresh from the Syrian peace conference in the nearby cities of Montreux and Geneva.

Both sides resumed peace talks in July under heavy American pressure, the first time they had done so in almost five years. There have been virtually no signs of progress, however. Kerry is working to get a framework deal in April.