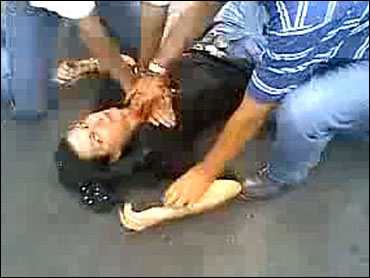 (AP Photo)
The International Police force, or Interpol, has denied a claim by Iran's police chief that it is seeking a doctor who witnessed the shooting death of 26-year-old "Neda."

Head of police Brig. Gen. Esmail Ahmadi-Moqaddam said, "Arash Hejazi is wanted by Interpol and Iran's Intelligence Ministry" in the murder of Neda, who's shooting fueled what were daily opposition rallies in the capital city of Tehran, according to a Wednesday report by Iran's Press TV, a state-run, English language network.

Speaking by phone to CBSNews.com Thursday morning from her office in Lyon, France, a spokesperson for Interpol flatly denied any involvement whatsoever in an investigation into Sultan's death.

"We've not received any request for information or for assistance on the death of that lady," spokesperson Rachel Billington said.

"We've received nothing from Iran," she emphasized.

Since video of Neda's murder swept across social networking Web sites, turning her overnight into a symbol of the Iranian opposition movement's defiance, the Islamic Republic's leaders have suggested repeatedly that her death was a staged act to stoke unrest.

Arash Hejazi, reportedly a doctor, was seen trying to care for Neda on the amateur video. He claimed to have witnessed her murder by a member of Iran's Basij voluntary militia.

In the interview with Press TV, the police chief claimed there was no connection between the young woman's death and the violent street demonstrations which paralyzed Tehran until dramatic crackdown by police and paramilitary militia members.

"The murder of Neda Agha-Sultan was a scenario and is not related to the Tehran unrest in any way," the network quoted Ahmadi-Moqaddam as saying.