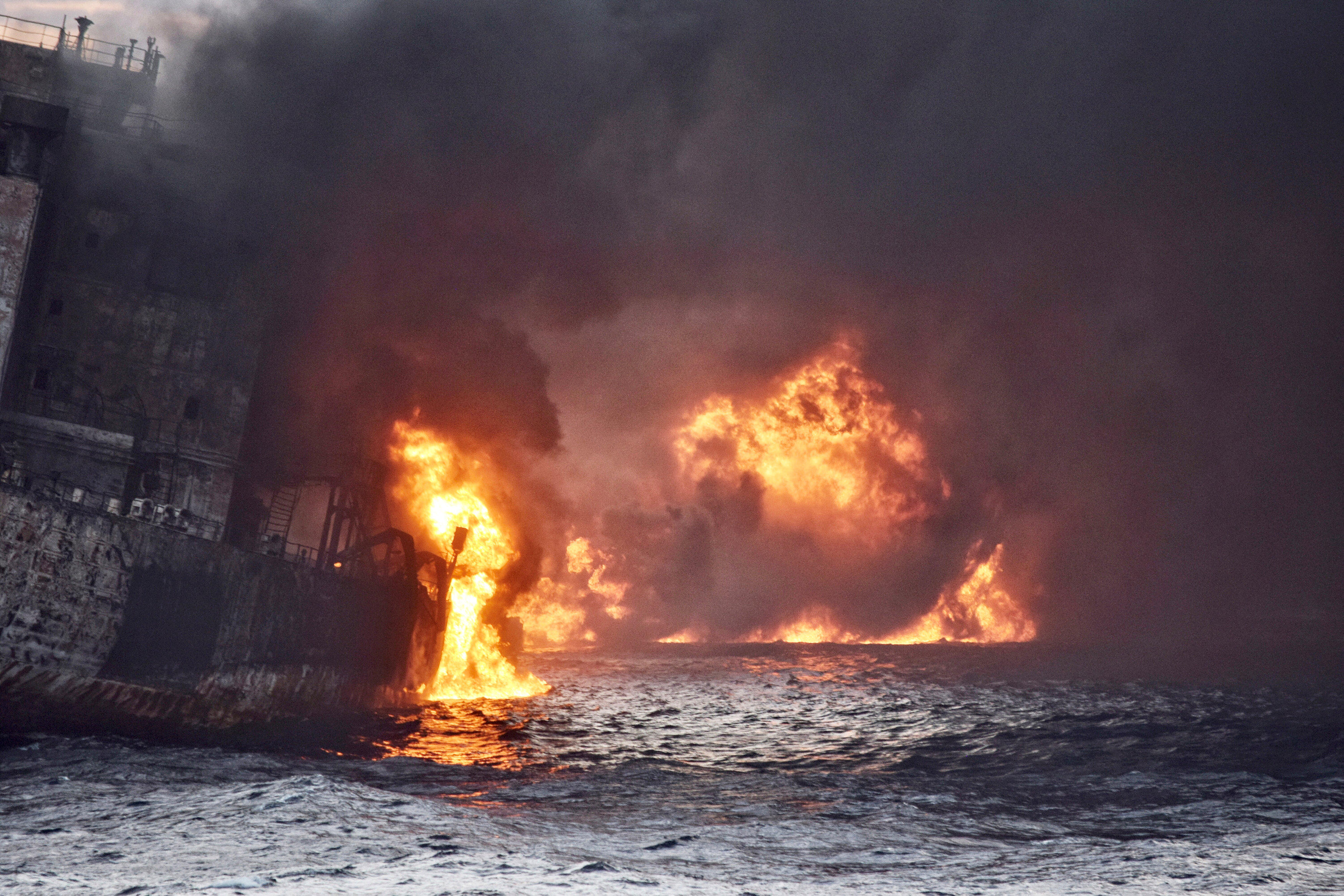 BEIJING -- The fire from a sunken Iranian tanker ship in the East China Sea has burned out, a Chinese transport ministry spokesman said Monday, although concerns remain about possible major pollution to the sea bed and surrounding waters.

The spokesman, who identified himself only by his surname, Zhao, said the fire ceased around noon. Earlier footage showed huge clouds of thick smoke rising from the oil slick that had been burning for more than a week.

Just three bodies from the tanker Sanchi's crew of 32, composed of 30 Iranians and two Bangladeshis, have been recovered.

The cause of the Jan. 6 collision between the Sanchi and the Chinese freighter CF Crystal, which happened 160 miles east of Shanghai, remains unclear. All 21 crewmembers aboard the freighter were reported safe.

Rescuers boarded the Sanchi on Saturday morning to recover two bodies, but a large explosion shook the ship around noon on Sunday and it sank within hours. High temperatures had prevented rescuers from entering the crew quarters. Another body was recovered from the water earlier last week.

The ship was carrying a type of hydrocarbon liquid known as natural gas condensate and left a 3.8-square-mile area contaminated with oil, according to Chinese authorities. Condensate is highly toxic but readily evaporates or burns off in a fire. If trapped underwater, however, it could seriously harm the marine environment, while the ship's fuel source also poses a major threat.

The ship's voice data recorder, which functions like a "black box" on aircraft, was reportedly recovered on Saturday, possibly helping shed light on how the collision and resulting fire occurred.

Zhao, who is deputy head of the ministry's press office, said new photos and video footage showed the fire had gone out entirely and said an investigation into the disaster would be conducted according to the "strictest international standards."

Chinese state broadcaster CCTV said rescue operations had been converted at noon to a search-and-recovery effort. Two ships were on the scene spraying foam detergents to dissolve oil remaining on the surface.

Ma Jun, director of the private Institute of Public and Environmental Affairs in Beijing, said the degree of environmental damage caused by the disaster depends on how much fuel was left in the tanker and the direction of winds and currents.

"The key issue is how much exactly the condensate oil has been left after all the burning and explosion, and how much of that sank together to the bottom of the sea," Ma said. "We need to keep an eye to prevent (toxins) being transferred to the fishing ground."

The disaster has transfixed an Iran still reeling from days of protests and unrest that swept the country at the start of the year.

Families of the sailors wept and screamed at the headquarters of the National Iranian Tanker Co. in Tehran, the company that owns the Sanchi. Some needed to be taken by ambulance to nearby hospitals as they were so overwhelmed by the news.

State TV earlier quoted Mahmoud Rastad, the chief of Iran's maritime agency, as saying: "There is no hope of finding survivors among the (missing) 29 members of the crew."

Iranian President Hassan Rouhani and Supreme Leader Ayatollah Ali Khamenei both expressed their condolences, with Rouhani calling on relevant government agencies to investigate the tragedy and take any necessary legal measures. The government also announced Monday as a nationwide day of public mourning over the disaster.

Chinese officials blamed poor weather for complicating their rescue efforts. Thirteen ships, including one from South Korea and two from Japan, had joined in the rescue and cleanup effort.

The Panamanian-flagged, 85,462-ton tanker has operated under five different names since it was built in 2008, according to the U.N.-run International Maritime Organization and the industry website Maritime Traffic.

It's the second collision for a ship from the National Iranian Tanker Co. in less than a year and a half. In August 2016, one of its tankers collided with a Swiss container ship in the Singapore Strait, damaging both ships but causing no injuries or oil spill.