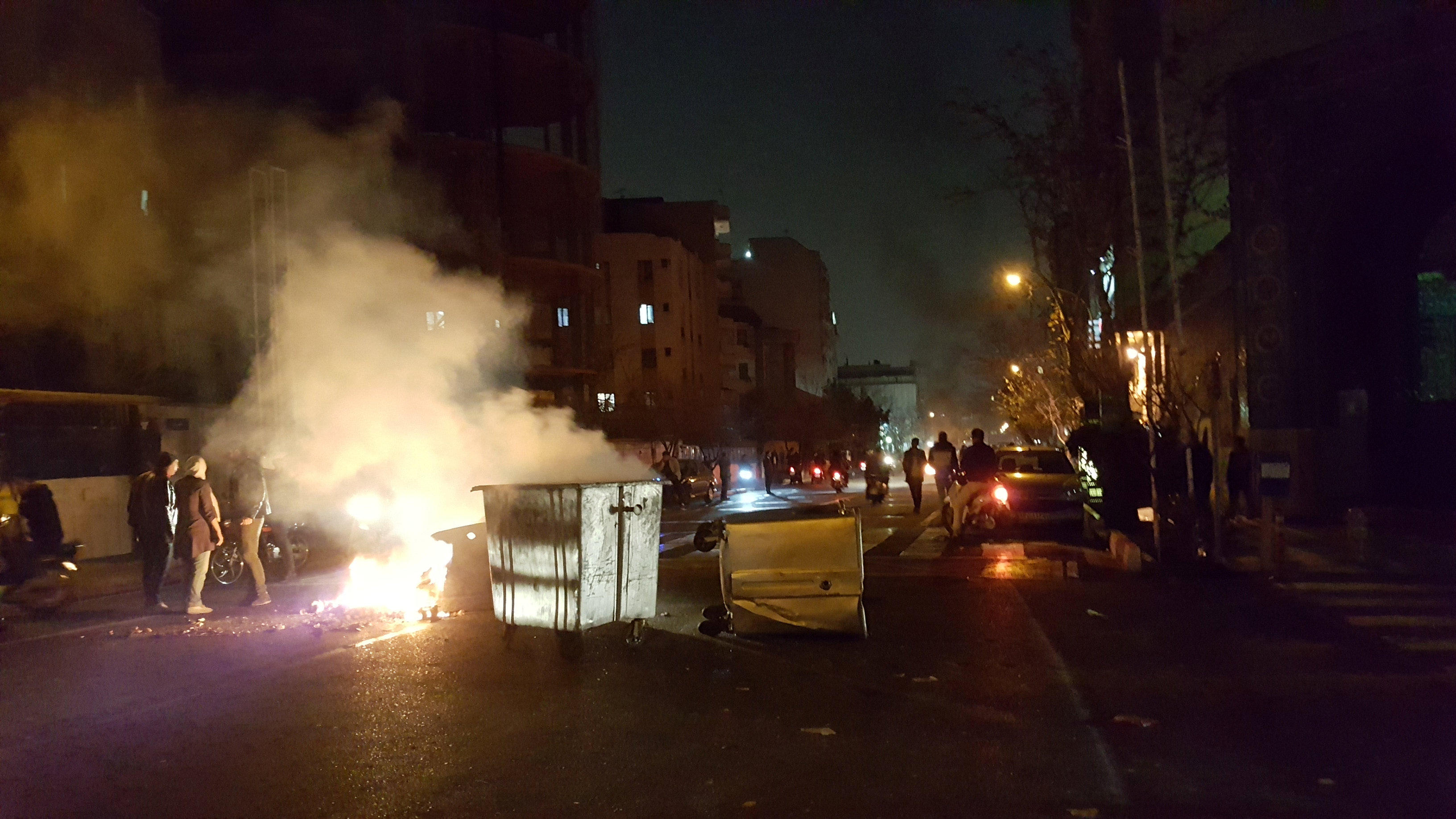 TEHRAN, Iran -- Iran on Thursday directly blamed a CIA official for a week of protests calling for the overthrow of the Islamic Republic, as the strength of the demonstrations was uncertain with fewer reports of rallies. The Trump administration has denied having any hand in the protests, and the CIA declined to comment.

It wasn't immediately clear if the drop in reports of new demonstrations challenging Iran's theocratic government meant the protests were subsiding or that the authorities' blocking of social media apps has managed to stop protesters from offering new images of rallies.

The demonstrations, which began Dec. 28 over the country's struggling economy, have been the largest in Iran since the disputed 2009 presidential election. At least 21 people have been killed and hundreds arrested.

Montazeri said the CIA official sought help from exiled Iranian groups and prepared for various scenarios that included protesting the high cost of living and financial demands on the elderly. The plot focused on fomenting dissent from the countryside to shake Tehran, Montazeri said. He alleged the CIA planned to turn the protest into an "armed" insurrection by mid-February, the anniversary of the 1979 Islamic Revolution.

The Associated Press is not publishing identifying details about the CIA official because the official may be an agent of its clandestine service.

A senior Trump administration official on Wednesday disputed the notion that the U.S. played any role in the protests, saying it had not expected them to occur.

"The protests were entirely spontaneously generated," said the official, who spoke on condition of anonymity to discuss intelligence matters.

Iranian suspicion of the CIA stretches back to 1953, when the CIA and the British executed the coup that overthrew its elected prime minister and cemented the rule of the American-backed shah.

The prosecutor's comments appeared aimed at discrediting protests that raised real questions about the challenges faced in Iran even after its 2015 nuclear deal with world powers. While many Iranians have denounced the violence that has accompanied some demonstrations, they echo the protesters' frustration over the weak economy and official corruption.

On Thursday, thousands again rallied in support of the government in dozens of towns and cities, including in the northeastern city of Mashhad, where the anti-government protests began and extended to other cities.

State television repeatedly broadcast nationalistic songs and described the pro-government rallies as an "answer to rioters and supporters to the riot." That appeared to be a reference to President Trump, who has tweeted several times in support of the anti-government rallies.

At the same time, Interior Minister Abdolreza Rahmani Fazli said about 42,000 people at most took part in the week of protests, saying they went on as long as they did because of the "leniency, restrain, tolerance and interaction" of the government. He did not elaborate.

Fazli's comments marked the first government estimate of participation in the protests and appeared timed so authorities could contrast it against the mass crowds brought together for the pro-government demonstrations.

Earlier, in a letter to the U.N., Iran accused the U.S. of "grotesque" interference in its internal affairs, saying U.S. leadership, in "numerous absurd tweets, [had] incited Iranians to engage in disruptive acts" that violated international law, BBC News reports.

Iranian UN envoy Gholamali Khoshroo said in his letter the U.S. has a track record of intervening in Iran's affairs. He also said the current administration "crossed every limit in flouting rules and principles of international law governing the civilised conduct of international relations."

In Moscow, a top Russian diplomat warned the U.S. not to meddle in Iran's affairs and suggested that Washington wants to use the unrest to undermine the Iran nuclear agreement.

"We warn the U.S. against attempts to interfere in the internal affairs of the Islamic Republic of Iran," Deputy Foreign Minister Sergei Ryabkov told the state news agency Tass on Thursday.

Ryabkov also said Washington "is tempted to use the moment to raise new issues with regard to the JCPOA," the Joint Comprehensive Plan of Action that limits Iran's nuclear program, including restricting uranium enrichment for 10 years, in exchange for lifting economic sanctions. Vice President Mike Pence said Wednesday the U.S. wants an agreement lasting longer.

It remains difficult for journalists and outsiders to piece together what's happening beyond Tehran, as Iran is a vast country of 80 million and travel there is restricted. The government also has blocked the messaging app Telegram, which protesters have used to organize their demonstrations and share photos and video. The government allowed access to Instagram to resume Thursday.

Senior Trump administration officials have acknowledged their surprise that the protests took hold so quickly.

"This was not on our radar," said one official, who like the others spoke on condition of anonymity to discuss intelligence matters.

The officials said they believed conservative opponents of President Hassan Rouhani, a relative moderate within Iran's clerically overseen government, started the demonstrations in Mashhad, but quickly lost control of them. That largely mirrors analysts' beliefs.

The officials also said internet suppression by Iranian authorities made it difficult for protesters to publish their videos, with an upload sometimes taking all day. They said the U.S. government is still looking at its options at helping open up the internet, although no decision has been taken yet.

Among the few videos to reach the outside world Thursday was one showing long convoys of anti-riot police vehicles heading into the countryside of central Iran.

Meanwhile, relatives of those arrested thronged outside Tehran's Evin prison, hoping to see their loved ones.