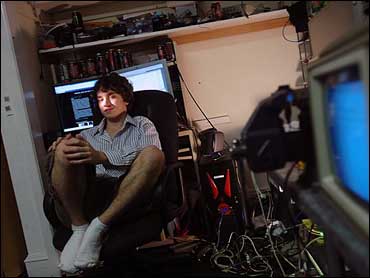 A 17-year-old hacker has broken the lock that ties Apple's iPhone to AT&T's wireless network, freeing the most hyped cellphone ever for use on the networks of other carriers, including overseas ones.

George Hotz of Glen Rock, N.J., confirmed Friday that he had unlocked an iPhone and was using it on T-Mobile's network, the only major U.S. carrier apart from AT&T that is compatible with the iPhone's cellular technology. In a video posted to his blog, he holds an iPhone that displays "T-Mobile" as the carrier.

While the possibility of switching from AT&T to T-Mobile may not be a major development for U.S. consumers, it opens up the iPhone for use on the networks of overseas carriers.

"That's the big thing," Hotz said in a phone interview from his home.

The phone, which combines an innovative touch-screen interface with the media-playing abilities of the iPod, is sold only in the U.S.

AT&T Inc. spokesman Mark Siegel said the company had no comment and referred questions to Apple. A call to Apple was not immediately returned. Hotz said the companies had not been in touch with him.

The hack, which Hotz posted Thursday to his blog, is complicated and requires skill with both soldering and software. It takes him about two hours to perform. Since the details are public, it seems likely that a small industry may spring up to buy U.S. iPhones, unlock them and send them overseas.

"That's exactly, like, what I don't want," Hotz said. "I don't want people making money off this."

He said he wished he could make the instructions simpler so users could modify the phones themselves.

"But that's the simplest I could make them," Hotz said. The next step, he said, would be for someone to develop a way to unlock the phone using only software.

The iPhone has already been made to work on overseas networks using another method, which involves copying information from the Subscriber Identity Module, a small card with a chip that identifies a subscriber to the cell-phone network.

The SIM-chip method does not require any soldering, but does requires special equipment, and it doesn't unlock the phone — each new SIM chip has to be reprogrammed for use on a particular iPhone.

Both hacks leave intact the iPhone's many functions, including a built-in camera and the ability to access Wi-Fi networks. The only thing that won't work is the "visual voicemail" feature, which shows voice messages as if they were incoming e-mail.

Since the details of both hacks are public, Apple may be able to modify the iPhone production line to make new phones invulnerable. The company has said it plans to introduce the phone in Europe this year, but it hasn't set a date or identified carriers.

There is apparently no U.S. law against unlocking cell phones. Last year, the Library of Congress specifically excluded cell-phone unlocking from coverage under the Digital Millennium Copyright Act. Among other things, the law has been used to prosecute people who modify game consoles to play a wider variety of games.

Hotz collaborated online with four other people, two of them in Russia, to develop the unlocking process.

"Then there are two guys who I think are somewhere U.S.-side," Hotz said. He knows them only by their online handles.

Hotz himself spent about 500 hours on the project since the iPhone went on sale on June 29. On Thursday, he put the unlocked iPhone up for sale on eBay, where the high bid was above $2,000 midday Friday. The model, with 4 gigabytes of memory, sells for $499 new.

"Some of my friends think I wasted my summer, but I think it was worth it," he told The Record of Bergen County, which reported Hotz's hack Friday.

Hotz heads for college on Saturday. He plans to major in neuroscience — or "hacking the brain!" as he put it to the newspaper — at the Rochester Institute of Technology.