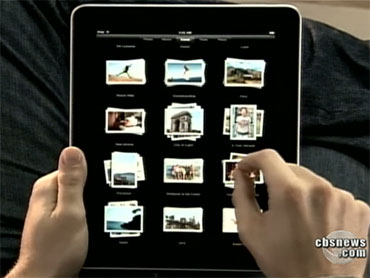 They came . . . they saw . . . they bought. First-day sales of Apple's iPad, which went on sale across the country yesterday, are estimated at 700,000 units. Of course, you only need one. John Blackstone has the fine print:

Like it or not, there is no way to ignore the iPad, from the cover of newsmagazines to the late night comedians:

That remains the question. What exactly does it do?

Steven Colbert had some suggested uses: "You can shield your eyes from the sun. And just look how quickly it makes delicious salsa!"

What it does, perhaps, is change everything.

"The iPad is like the Beatles of 2010," said Steven Levy, senior writer of Wired Magazine. "It takes something that we thought we knew and makes it seem fresh."

Levy says the brilliance of the iPad is that it makes the computer disappear.

It can be a game board, or a movie screen with the touch of a finger.

The appeal of that has already been noted by other computer makers who are now rushing to get their own tablet computers to market. Just the way that Apple's iPhone started a flood of other smartphones … the iPad will do the same, says technology analyst Larry Magid.

He says, to use the language of the original tablet, from Moses, iPhone "begat" all that followed in cell phones. "The iPhone really created this demand for smartphones that used touchscreen, and that use your fingers to control them," he said.

It may be what Apple has been working towards for decades.

In the beginning computers were complicated. You almost needed a programmer's skill to make them work.

Then along came Apple with machines that seemed designed for anybody to use. In a remarkable video from 1981, a bearded Steve Jobs told a skeptical CBS News correspondent why the computer he's built will catch on:

"It's just going to be very gradual and very human. and will seduce you into learning how to use it," he said.

Jobs was right. We've learned how to use computers, and now he's selling one that doesn't seem to be a computer at all.

And that may lead to things we can't even guess yet.

"The thing about technology is that the most exciting applications are probably the ones that nobody has yet imagined," said Magid. "Technology opens up the doors for creativity."