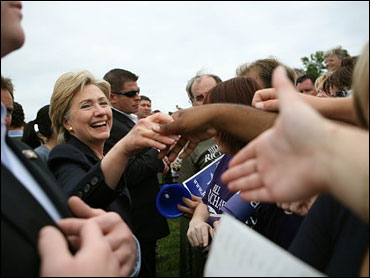 On their way through the small town (pop. 12,066) just south of Des Moines, they pass by field offices of three of those campaigns - three among at least 96 outposts the six leading Democratic candidates have opened around the state.

"I'm not sure at this time in the last cycle anybody had an office here in Indianola," marveled Matt Paul, the Harkin staffer organizing the annual gathering.

For all the chatter about a re-jiggered primary calendar and jockeying from California to Michigan to Florida, the January 14 Iowa caucuses have emerged as the central battle of the Democratic primary.

Aides to Hillary Clinton, Barack Obama, and John Edwards all realize that, to varying degrees, victory or defeat in the caucuses is probably the single likeliest predictor of the nomination.

And for the three other major Democratic politicians running full-scale campaigns - Sens. Chris Dodd (D-Conn.) and Joe Biden (D-Del.) and New Mexico Gov. Bill Richardson - the centrality of the state is a reason to stay in the game.

"The acceleration on this is way beyond what anybody's seen," Dodd told Politico. "The overwhelming majority of people are truly undecided at this point or could easily change their minds."

This presidential cycle began with a whisper that Iowa may have lost its relevance, which has never been more than tenuous even after the state became a defining early campaign test.

The frontloaded national primary schedule suggested to many that campaigns would ignore Iowa in favor of large states that vote just days or weeks later - first Michigan and Florida, then New York, California, and others.

The presence of two national celebrity candidates, Sens. Hillary Clinton of New York and Barack Obama of Illinois, heralded the end of small living room meetings with handfuls of voters.

The possibility also loomed that leading campaigns would simply cede the state to the hometown candidate, Gov. Tom Vilsack, as Bill Clinton had to Harkin in 1992 - rendering the results academic.

Similar fears on the Republican side have come slightly truer, with former New York Mayor Rudy Giuliani hedging his bets and most major candidates skipping the Ames Straw Poll, though they are also campaigning and spending heavily inside the state.

The conflict between the traditional early states and the big newcomers to the early primary schedule has, paradoxically, strengthened the early states of Iowa, New Hampshire and South Carolina.

The perceived momentum they generate may be harder to stop. And the rivalry has forced the candidates to make their fealty explicit, putting their signatures on a "Four State Pledge" that bars them from campaigning in Florida for months.

"In a funny way the activity around the pledge has taken it to a whole new level because it's kind of made everybody acknowledge that Iowa's really going to be first," said Larry Rasky, Biden's campaign communications director, who called the caucuses "a pretty fair test."

The money matters too. Clinton and Obama have each raised record sums, and the four other candidates have all raised millions of dollars that they have already begun pouring into television advertising in, of course, Iowa.

In an early signal of the scale of that spending, a leaked memo from an aide to Clinton's campaign warned that it was likely to spend $15 million total in Iowa - the sum spent by Democrats and Republicans combined in the Iowa governor's race last year.

With the partially self-funded Republican Mitt Romney also staking his campaign heavily on Iowa, the state's broadcasters are poised for record advertising hauls, and television viewer here are braced for a deluge.

"It's going to be wall-to-wall television from both parties," said Iowa Democratic chairman Scott Brennan.

Conventional wisdom holds that Iowa will be the make-or-break state for at least one candidate, Edwards, whose lead in many Iowa polls contrasts with low poll numbers on the national scale and in other early states. But the other leading candidates are almost as deeply committed.

"It is very important for all the candidates to do well in Iowa," said Dan Leistikow, Edwards' communications director for Iowa.

The national perception of Clinton as Democratic front-runner - and the momentum that her campaign has worked to build around that perception - did not ultimately give her the option of skipping Iowa, for fear that a show of relative weakness there would have spilled over to the national scene.

Obama, who could arguably have focused elsewhere, also chose instead to invest heavily in a state next door to his native Illinois and historically warm to charismatic insurgents.

With the most field offices in the state - 30 to Clinton's 21 and Edwards' 15 - Obama is the one gambling that he can involve new voters in the caucus process and organize to bring them to the polls.

"We have the happy circumstance that the candidate with [the] most bottom-up appeal also has the most money - I'm not sure that's ever occurred before," said Iowa Attorney General Tom Miller, who recalled the recent opening of Obama's field office in the northeastern Iowa hamlet of Maquoketa.

"I think that was the first candidate to have an office in Maquoketa in people's memory," Miller said proudly.