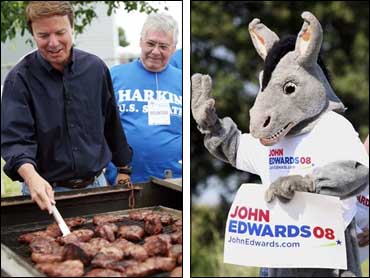 Six Democratic presidential candidates took aim at President Bush as they made their case Sunday to thousands of activists scattered across an Iowa field.

The six candidates paraded after each other in a carnival-like atmosphere in a field about 20 miles south of Des Moines. An estimated 12,000 activists streamed in for Iowa Sen. Tom Harkin's annual steak fry, shelling out $30 each in a fundraiser for a veteran Democrat senator who doesn't face serious opposition in next year's election.

John Edwards and Hillary Rodham Clinton joined with Harkin to grill some steaks before a giant bank of television cameras. "I've done this before," Edwards said as he flipped a steak.

Clinton, the New York senator, called on Bush to bring the troops home from Iraq, declaring, "The era of cowboy diplomacy is over."

"They deserve to come home because there is no military solution," said Clinton. "Unfortunately, both the Iraqi government and the Bush administration have failed."

Delaware Sen. Joseph Biden, who heads the Senate Foreign Relations Committee, said: "George Bush made it clear - he will not end the war in Iraq. If there was ever any doubt, now there is none. One of us on this stage will have to stop the war he started."

Obama said he would not vote for any war-funding measure that doesn't include a timeline for bringing troops home.

"We must recognize that until we end the divisive politics this war has spawned, we will be unable to build a consensus here at home to accomplish all the goals we share," Obama said.

New Mexico Gov. Bill Richardson said: "I would end the war in Iraq and I would bring all the troops out of Iraq. No residual forces. My position is clear: we bring the troops out within six to eight months. The war cannot end with leaving troops behind."

A few other issues popped up during the event. Connecticut Sen. Chris Dodd pointed to his call for expanded health coverage. "It is shameful that today, 50 million people in America have no health care," he said. That will change and must change if we care about the future of our country."

Clinton is scheduled to announce her plan for universal health care on Monday. Edwards, the former North Carolina senator, took at shot at her refusal to give up campaign money from health interest groups. "If they get a seat at the table, they'll eat all the food and there will be nothing left for the rest of America," he said.

Ohio Rep. Dennis Kucinich and former Alaska Sen. Mike Gravel are also running for the Democratic nomination, but they were not invited to Sunday's event because they have no campaign operation in Iowa.

Whoever wins or loses next year, the Iowa economy is one sure winner, adds Greenfield. Between advertising, travel and lodging expenses, and logistics, the Hawkeye state will be $200 million richer by January.