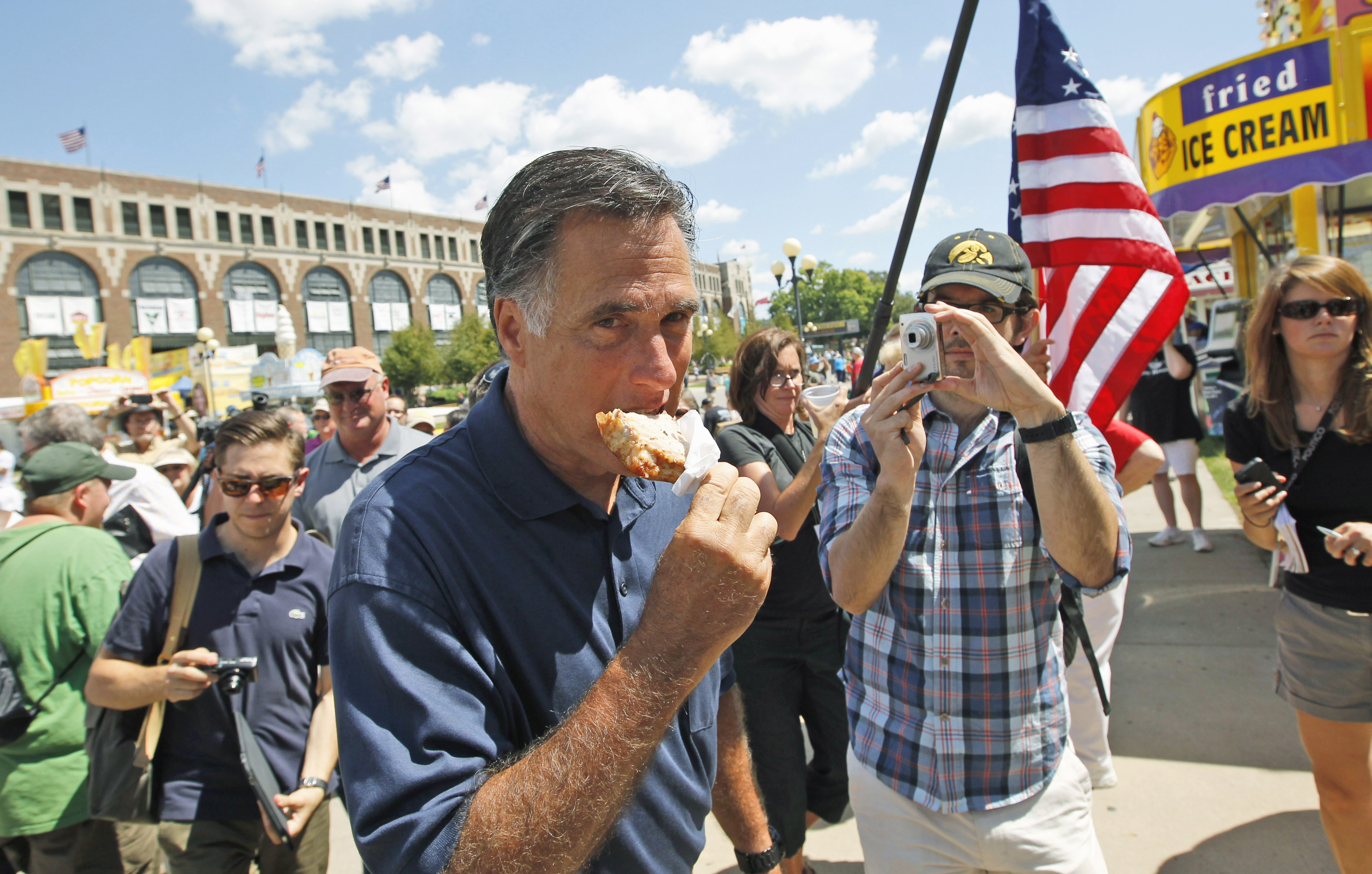 DES MOINES, Iowa - At the massive Iowa state fair, you can eat fried butter on a stick or a "Hot Beef Sundae" while watching livestock competitions and checking out the famous "butter cow" sculpture. And in between, you can also take some time to hear from most of the Republicans running for president.

A series of GOP contenders are standing up on the hay bales at the fair's "soap box" here on Friday, the second day of the fair. Herman Cain kicked things off under cloudy skies in the morning, offering up a preacher-style stump speech tailored to the crowd - he made a few references to the fair's "pork chop on a stick," one of more than 50 foods that come in "on a stick" form here.

Cain, dressed in blue suit pants, a button-up blue shirt and no tie, said the time had come to get "government out of our pockets" as a few hundred Iowans stood watching. A few clapped and smiled as he discussed how "the American people have an appetite for a non-politician" like him, while others stood there stoned faced, their expressions suggesting they had seen it all before. Asked where the politicians would be speaking on Thursday, an older man at an information booth pointed to the soap box area and said "where they'll be doing this" - and then pantomimed shoveling manure.

Mitt Romney took to the soap box Thursday, where he got in a confrontation with some liberal activists and memorably asserted that "corporations are people." (watch video at left)

Romney, unlike most of the other speakers at the soap box, is not seriously competing in Saturday's straw poll - an event that can boost a presidential campaign despite its small size and relative meaninglessness.

When you talk to fair-goers here, most say it's too early to start thinking about politics - they tend to be more interested in seeing the butter cow than assessing the candidates. But for the Republican contenders, the fair is a must-stop for a speech and, in many cases, a photo-op barbecuing at the Iowa pork tent.

The candidates know that a victory in the Iowa caucuses a few months from now could make or break their campaigns - and the state fair, which attracts hundreds of thousands of Iowans each year, is the easiest place to reach a large number of them. Even if for many of the fair-goers themselves, their stump speeches are less appealing than the fair's biggest steer competition.