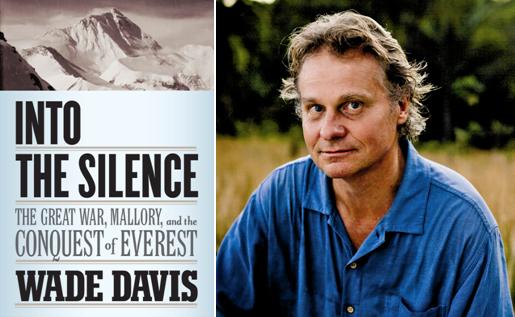 Jeff Glor talks to Wade Davis about "Into the Silence: The Great War, Mallory, and the Conquest of Everest."

JG: What would you be doing if you weren't a writer? WD: Though I have published many books- 15 I believe at this point- I don't really think of myself as a writer as much as a storyteller. Were I not to be writing books I would be making films, taking photographs, and conducting research as an anthropologist and historian both in the field and in the archives. Which is what I am already doing. As an Explorer-in-Residence at the National Geographic Society my mandate is to celebrate the wonder of culture and share our mission with a global audience. While writing Into the Silence, I published five other books and made some 20 films.

JG: What else are you reading right now? WD: I read for the most part biographies and history. Over the last three weeks I have read three books by one of my favorite historians, Sir Max Hastings. But I am also reading the manuscript of a new novel by my close friend, Leslie Cockburn. It's called The Palace of Sand and it is the best work of fiction I have read in years and by far the most insightful book I know to have come out of the debacle of the Iraq campaign. JG: What's next for you? WD:  I will be working very hard to save an area of British Columbia known to the First Nations as the Sacred Headwaters, the birthplace of three of our most important salmon rivers. I have an illustrated book on the campaign due out in the fall ("The Sacred Headwaters: The Fight to Save the Stikine, Skeena and Nass") and will be very active over the next months. I also intend to publish E. O. Wheeler's journals in their entirely and also put out a small book on the Grand Canyon of the Colorado. A second collection of my photographs (2000-10) will also appear in 2013. Once these small projects are complete, and the crisis in northern British Columbia resolved one way or another, I hope to embark on a final series of journeys down the rivers of life, beginning with the Ganga. This will be a ten year effort, and should carry me if not into a rocking chair, at least to the quiet of my porch at Wolf Creek overlooking Ealue Lake and the Sacred Headwaters.


For more on "Into the Silence," visit the Random House website.