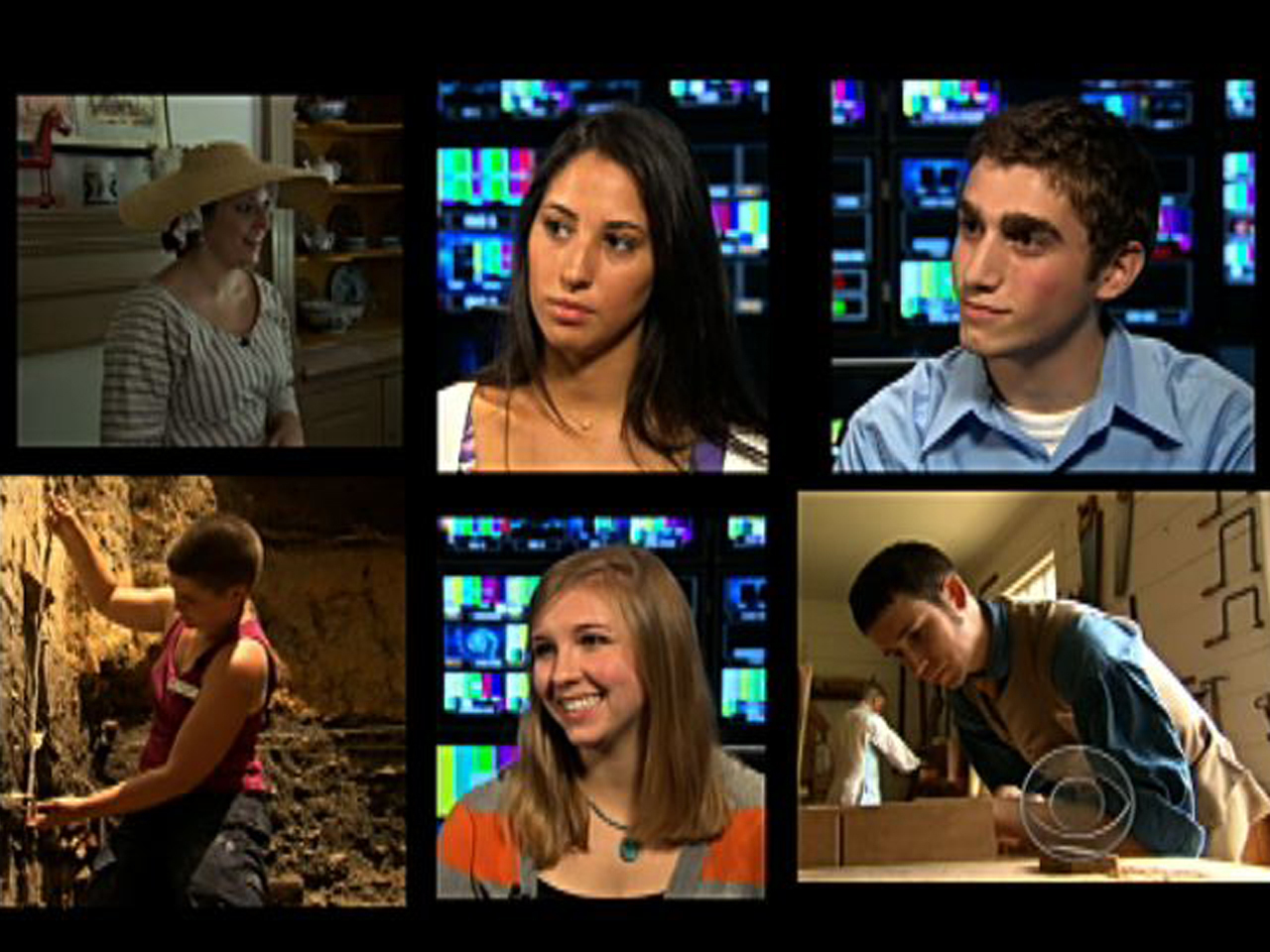 It's vacation season in America and families are flocking to popular destinations, like Colonial Williamsburg in Virginia.

They come here for the 18th century experience, but in one respect, Williamsburg is as modern as any 21st century city - the place is crawling with interns, more than 100.

Even Thomas Jefferson isn't sure what to make of them.

"What do you think of internships?" Tracy Smith asked a man portraying Jefferson.

"Internships? Now I beg your pardon, Ms. Smith, but I'm not too familiar with the word internship," he replied, staying in character.

For Lauren, it's a dream job, except for one thing: She's not getting paid.

"I'm getting paid in experience, I feel," she said.

Asked if the experience pays the rent, she told Smith, "It doesn't but family friends have been very nice."

"Now, why not pay your interns?" Smith asked Jay Gaynor, the director of historic trades at Williamsburg.

"I'd like to pay the interns. I mean, it really is a matter of finances. We just don't have the economic resources to do it," he explained.

Gaynor says internships are a win-win. The kids get experience, and the employers?

"The greatest benefit for us is that we get some extra help when we need some extra help. I mean, it's just very straightforward. We get some new blood. Young kids that have a different perspective on things and that's exciting," Gaynor said.

All work, for little or no pay. That's the intern's lot. And today, there are lots of them: From Yosemite to Sea World, to the White House and just about everywhere in between.

"Internships are so popular today, they're almost a trend - everyone wants these internships. I graduated college in 2006. And even then most of my close friends didn't have internships. But since then it has just really kind of caught on," Lauren Berger said.

Berger calls herself the intern queen, for good reason. She talked her way into 15 college internships, all unpaid. "And if I went back in time, I would do it all over again," she said. "Those internships just helped me learn so much about myself and about what I wanted to do. And it was information that I wasn't getting in the classroom."

While most colleges have career centers to help place students, resources vary widely. So after graduating, Berger started an internship information Web site because she knows kids are getting desperate.

"The most common question that employers are asking in that job interview after graduation is, 'Where did you intern?' And if the person next to you even had one internship and you didn't, there's a good chance that that other person is gonna land the opportunity," Berger explained.

How hot are internships? In New York City earlier this month, Berger threw a small party for interns to meet and greet one another and got a lot more than she bargained for: a long line of interns.

We thought it was appropriate to have our own "Sunday Morning" interns cover the event.

Ian Goldstein, Erika Mahoney, and Briana Berg helped research this report and it was truly an eye-opening experience.

"Since you guys are in this unique position of being interns and doing a story on internships, what has surprised you most about digging into this?" Smoth asked.

Eisenbrey is vice president of the Economic Policy Institute, a non-profit Washington think tank. Unpaid internships, he says, are taking paid jobs away from people who need them.

"This is a concern that economists have: 'Why isn't business hiring people?'" he asked. "Well, if they can have people work for free why should they hire anyone? And in fact, I'd say, you know, if they could get them to work 60 or 70 hours a week without paying them, so much the better. They don't have to pay them overtime, I mean, where does this stop?"

And there's another problem, Eisenbrey says increasingly the top internships are going to kids from the top of the income ladder. "Who can afford to come to Washington and spend $4,000 on housing and food and then work without being paid? It is not the children of farm workers or factory workers or, you know, the children of people who are unemployed right now. It's going to be upper middle class kids," he explained.

"Sunday Morning" intern Erika Mahoney agrees. Like all 75 summer interns at CBS, she receives a $50 per week stipend.

"My parents are helping me out a lot. And, you know, it's hard to think about that because I have friends who wouldn't be able to do something like this. And so, you know, every day I call my parents and I tell them everything about my day because I know that, like, that's how I can show my appreciation," she told Smith.

"You seem to feel a little guilty about this," Smith asked.

"I do," Mahoney admitted.

"Well, you could say that. And if they could persuade people to work for half of the minimum wage, if they could get adults to work for free for six months, not just young people, then why not, what's wrong with that?" Eisenbrey replied. "Well, it degrades the entire value of work. And that's actually going on in our society."

But in this economy, some people would rather work for nothing than not work at all, and it's not only kids. After 10 years fundraising for various non-profit groups in Knoxville, Tenn., Kristina Shands found herself suddenly unemployed.

"It literally was within 15 minutes: I had no job, I had no health insurance, I had nothing," she remembered.

A life-long hockey fan, she took a bold step and at age 38 talked her way into an un-paid internship with a minor league hockey team, The Knoxville Ice Bears.

"I just started working the games, press releases, post-game summaries, helping with promotions and marketing and did that for the entire 2009-2010 season," Shands explained. "It was strange at times. I mean I'm working with 20 year olds, and I'm almost twice their age."

But it worked: That unpaid intern, is now a paid media consultant. "You gotta be able to think big and then have the guts to kind of start from the bottom and figure it all out. And maybe you'll hit the jackpot like I did," Shands said.

Back in Colonial Williamsburg, the jackpot is exactly what intern Lauren James is hoping to hit. "All summer I've been saying that hopefully this is a three month job interview. Hopefully this will catapult my career and do great things for me because this really has been such a learning summer," she said.

One good thing about Williamsburg? You can always turn to Thomas Jefferson for advice.

"So it is wise to work for no money?" Smith asked.

"I would take the risk and pursue certain employment, whatever it may be, without the benefit of immediate remuneration," the Jefferson impersonator asked. "But for the benefit of immediate enlightenment. And that that might further lead to an opportunity that will pay and perhaps pay far the better than they would have ever thought in the beginning."