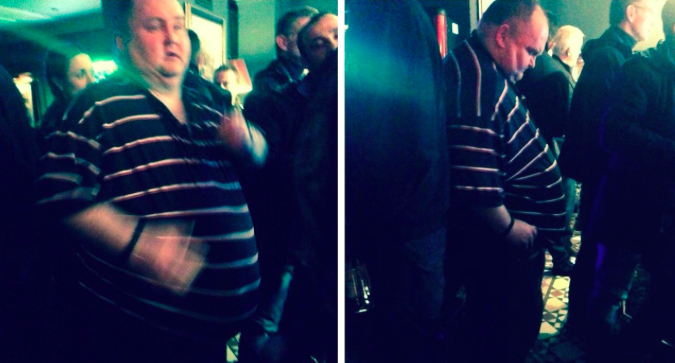 A victim of cyber-bullying has quickly become a hero to thousands of Internet users.

Photos making fun of a "dancing man" for being overweight posted by an anonymous user on online message board 4chan sparked Internet outrage this week.

"Spotted this specimen trying to dance the other week," the user posted, along with a photo of a man happily dancing.

"He stopped when he saw us laughing."

A second photo -- posted alongside the first -- showed the man with his head down, looking embarassed.

People soon began calling out the bully who posted the photo on social media, including The Free Thought Project writer Cassandra Fairbanks.

Fairbanks re-posted the picture on Twitter, asking her 30,000 plus followers to help her find the man because 2,000 women in LA wanted to do "something special" for him. Her tweet was shared nearly 3,000 times.

"Body shaming is awful & people hide behind social media. Help me and my 2,000 girlfriends #FindDancingMan," another Twitter user posted.

Within 12 hours, there were more than 11,000 tweets with the hashtag #FindDancingMan.

The group of women then started a GoFundMe page, which has already raised nearly $13,000, to fly the man to LA and throw a dance party for him.

After just 13 hours, the man accepted the girl's invitation.

"Cassandra just seen invite and would love to join you in LA for a dance off!!" the man tweeted from Twitter handle @Dancingmanfound.

Fairbanks responded: "We are going to dance!!!"

Even celebrities, like Pharrell Williams, plan to attend the party.

"Hey @CassandraRules keep me posted about your dance party! @Dancingmanfound, never be ashamed of yourself. You are both truly #OTHER," Pharrell Williams tweeted on Friday afternoon.