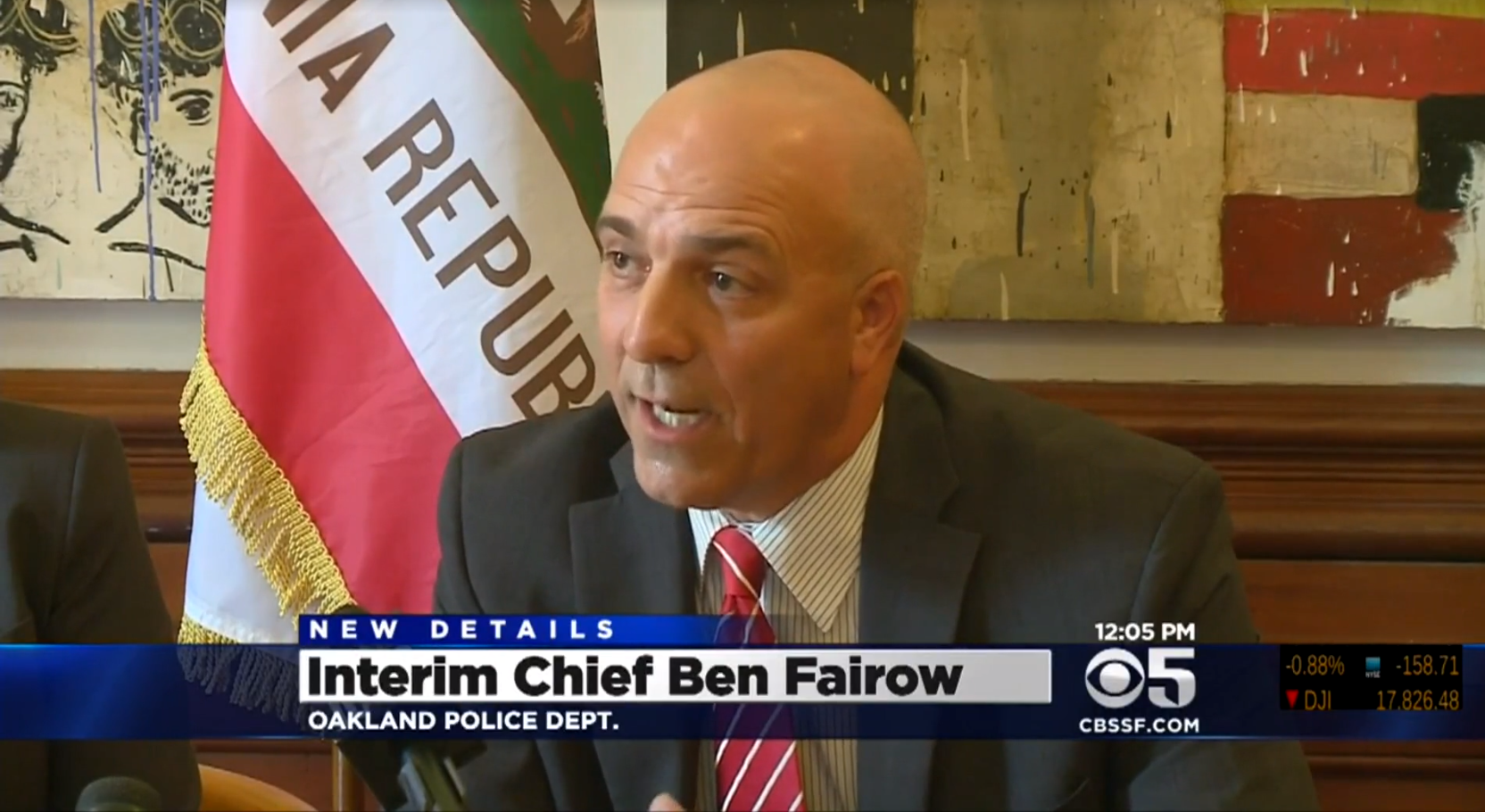 OAKLAND, Calif. -- After firing an interim police chief who had been in place for less than a week, the mayor of Oakland vowed to recruit a new law enforcement leader from outside the city to oversee a department tarnished by "disgusting allegations" that a number of officers had sex with a teenage prostitute.

Mayor Libby Schaaf said her office was conducting a formal background check on Interim Police Chief Ben Fairow when she received new information that led to his abrupt dismissal on Wednesday. Schaaf declined to reveal what that information was, citing state personnel laws, but called Fairow's brief appointment a mistake.

"I remain as determined as ever to ensure that this department has a culture that does not tolerate immoral behavior, bad judgment or disrespect and certainly does not tolerate victimization of sexually exploited minors," Schaaf said.

Bay Area Rapid Transit Police Chief Kenton Rainey said later Wednesday he had welcomed Fairow back to his department and that Fairow had informed him he had an affair with a consenting adult while married more than a decade ago.

That doesn't preclude "him from serving as a sworn law enforcement officer or as one of my Deputy Chiefs," Rainey said.

Fairow has been reassigned to his position as deputy chief of the department's support services division, Rainey added.

The Oakland Police Department has been under renewed scrutiny since the city's previous chief revealed publicly last month that an internal investigation had been launched into alleged sexual misconduct with a minor by three officers. The investigation was opened based on questions that arose from an Oakland officer's September suicide.

An 18-year-old woman has alleged in multiple news media interviews that two dozen current and former officers in five cities had sex with her. The encounters happened in exchange for protection or advance word on planned prostitution stings, and three of the officers had sex with her when she was underage, the woman has said.

Two Oakland officers have resigned, and three others remain on paid leave in the case.

Other law enforcement agencies in the area also are investigating possible misconduct by their officers. The police department in the city of Richmond said this week that several ranking officers are being investigated for criminal contact with the woman or policy violations.

Oakland City Councilwoman Rebecca Kaplan said Wednesday that the city council had not been briefed on the mayor's reasons for firing the interim chief. But Kaplan expressed concern about the police department's ability to investigate its own.

"We have a systemic problem here," she said. "What is going on with how this whole scandal is being handled by the department is ridiculous."

The mayor acknowledged that the appointment had been rushed, but said she felt comfortable inviting him to take the job temporarily because she knew him from his previous work in Oakland, which included stints in internal affairs and overseeing the police department's vice and narcotics unit.

"The leadership of this department at this moment in time is very important. We are dealing with disgusting allegations that upset me greatly," she said, adding that new leadership would be critical to making clear the department does not tolerate "unethical behavior, sexual misbehavior or lying."