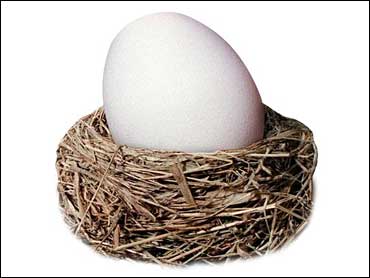 Companies were forced to shift big money from earnings into their pension plans last year after falling share prices knocked value from their assets, leaving the plans underfunded.

Now there are worries over the profit-crimping that could result from declining interest rates, which inflate companies' pension obligations.

"This is the perfect storm for pension funding," said Gerry Katz, senior vice president at the retirement services provider Diversified Investment Advisors. "The recent revival in the stock market is not strong enough to relieve companies from these problems."

The pension issues only affect companies with defined benefit plans, or those that promise future pension payments to their employees. Unaffected are companies' defined contribution plans, such as 401(k)s.

A pension plan is considered underfunded when its obligations exceed its assets by at least 10 percent. That's when companies are required to fill the void by taking money from their earnings and adding it to their pension plans.

During the stock market boom, it wasn't a worry for most companies. In fact, many had pension surpluses, with their assets growing thanks to stunning returns on Wall Street.

But the gains slowly disappeared during the crippling bear market, and last year many companies saw their overfunded pensions become underfunded. A study by Credit Suisse First Boston accounting analyst David Zion found that the decline in stock markets shaved $173 billion from pension assets of companies in the Standard & Poor's 500 stock index by the end of 2002.

And now, while the rebound in the stock market has helped stem some of the losses in pension asset values, that has only solved part of the problem.

Interest rates have been tumbling to levels not seen in decades, a result of the Federal Reserve's 12 rate cuts since 2001 to recharge the sluggish economy. Another cut is expected next week when the Fed's policy-makers meet.

When interest rates drop, so do discount rates, which are often based on the yield on investment-grade corporate bonds. At the end of last year, the yield was about 6.75 percent. Now it's around 6 percent.

Discount rates are used to estimate how fast money already in the pension plan will grow, and how much more money is required to meet the pension obligations over an employee's lifetime. The lower the discount rate, the more money the company needs to contribute to its pension fund.

Think of it like this: If you know you will owe $100,000 to an employee in 20 years, you assume you will get a certain amount of interest on the money you put away each year. That interest is based on the discount rate. So if you are getting less interest, you have to contribute more money upfront.

For example, in General Motors' 2002 annual report, the company said it established a 6.75 percent discount rate for last year, down from 7.25 percent in 2001. Looking ahead, the automaker said if discount rates fall a quarter of a percentage point this year, it would result in a $120 million increase in pre-tax pension expense and a $1.9 billion jump in its pension obligation.

CSFB estimates that the growth in S&P 500 pension obligations is about 10 percent so far this year, outpacing the year-to-date growth in pension assets of about 8.5 percent.

That difference could mean that companies get caught short again when they do their year-end pension adjustments in their financial statements. CSFB estimates that declining discount rates could result in earnings being reduced by about $11 billion for the entire S&P 500.

That could come as a big surprise to investors, who seem to have thought that pension problems were solved when the stock market turned around in March.

The good news is that the Financial Accounting Standards Board, the U.S. accounting rule maker, is beginning to look into whether to make pension disclosures quarterly, rather than once a year.

"That would make it a more timely situation so that investors don't have to wait," said Zhen Deng, an accounting analyst at investment firm UBS.

In the meantime, there could be a nasty bit of sticker-shock when investors realize that corporate America isn't through with its pension woes after all.