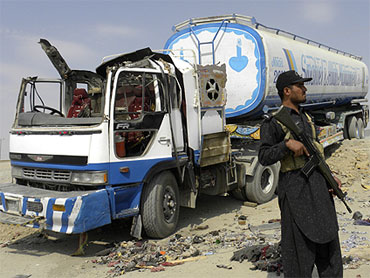 President Barack Obama's Afghanistan war plans took two major hits this week: First, his longtime adviser and chief diplomat in the region, Richard Holbrooke, passed away unexpectedly. Now, two classified intelligence reports, one each on Afghanistan and Pakistan and intended for congressional committees, had their contents leaked to The New York Times and their findings are not good.

The reports, called National Intelligence Estimates, represent the consensus view of 16 domestic intelligence agencies without military input, the Times reports. Members of the House and Senate committees who read the reports described them to the Times.

The NIEs claim there is limited chance of success in Afghanistan unless Pakistan hunts down insurgents operating with seeming impunity from safe havens along their porous border, something the government in Islamabad has been dragging its feet on for years.

Military officials took immediate steps to downgrade the NIEs findings, the Times reports. Military intelligence commanders have traditionally been somewhat hostile to their domestic counterparts, even as they work together closely in the Afghan theater, referring to them as armchair quarterbacks who never spend time in the field.

Regardless, many military commanders could not tell the Times the findings in the NIE were inaccurate.

"I'm not going to make any bones about it, they've got sanctuaries and they go back and forth across the border," Maj. Gen. John F. Campbell, the commander of NATO forces in eastern Afghanistan, told reporters last week in the remote Kunar Province of Afghanistan. "They're financed better, they're better trained, they're the ones who bring in the higher-end I.E.D.'s."

American commanders say their plan in the next few years is to kill large numbers of insurgents in the border region -- the military refers to it as "degrading the Taliban" -- and at the same time build up the Afghan National Army to the point that the Afghans can at least contain an insurgency still supported by Pakistan, the Times reports. American officials say Pakistan supports the insurgents as a proxy force in Afghanistan, preparing for the day the Americans leave.

Members of the Central Intelligence Agency, which itself commands thousands of Afghan paramilitaries, say this is the best option they have available given the circumstances described in the NIE.

"That is not the optimal solution, obviously," said Bruce O. Riedel to the Times, himself a former C.I.A. official and now a senior fellow at the Brookings Institution, who led a White House review of Afghan strategy last year that resulted in Mr. Obama sending the additional forces. "But we have to deal with the world we have, not the world we'd like. We can't make Pakistan stop being naughty."