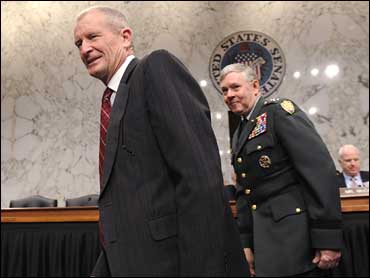 Iran does not yet have any highly enriched uranium, the fuel needed to make a nuclear warhead, two top U.S. intelligence officials told Congress Tuesday, disputing a claim by an Israeli official.

Meanwhile, a key Security Council committee reported that Iran had violated U.N. sanctions by trying to send weapons-related material to Syria on a cargo ship now docked in Cyprus.

U.S. National Intelligence Director Dennis Blair and Defense Intelligence Agency Director Lt. Gen. Michael Maples said Tuesday that Iran has only low-enriched uranium - which would need to be refined into highly enriched uranium before it can fuel a warhead. Neither official said there were indications that refining has occurred.

Their comments disputed a claim made last weekend by Israel's top intelligence military official, who said Iran has crossed a technical threshold and is now capable of producing atomic weapons.

The claim made by Israeli Maj. Gen. Amos Yadlin (see report in Israel's Haaretz newspaper) runs counter to estimates by U.S. intelligence that the earliest Iran could produce a weapon is 2010, with some analysts saying it is more likely that it is 2015.

Maples said the United States and Israel are interpreting the same facts, but arriving at different conclusions.

"The Israelis are far more concerned about it," Maples told the Senate Armed Services Committee.

The status of Iran's nuclear program has been the subject of conflicting public statements by top military and intelligence officials recently in the wake of U.N. revelations that Iran has more low-enriched uranium than previously thought.

Earlier this month, Defense Sec. Robert Gates and Joint Chiefs of Staff Chairman Adm. Mike Mullen differed over Iran's capability. While Mullen said Iran has sufficient fission material for a bomb, Gates insisted "they're not close to a weapon at this point."

Western fears over Iran's nuclear intentions motivated the United Nations Security Council to approve the sanctions currently in place against the Islamic Republic.

Those sanctions prohibit Iran exporting any weaponry - a rule the U.N. official in charge of monitoring the sanctions now says Tehran has violated.

(AP Photo/Andreas Lazarou)
Japan's U.N. Ambassador Yukio Takasu, chairman of the Iran monitoring committee, provided few details, but his report on Tuesday marked the first official confirmation that the Cypriot-flagged M/V Monchegorsk (at left, docked in Cyprus) was trying to circumvent the U.N. arms embargo on Iran. The ship docked on Jan. 29 and is still there, diplomats said.

Takasu said a U.N. member state - identified by the United States, Britain and France as Cyprus - sent a letter to the committee in early February "seeking guidance with respect to its inspections of cargo on a vessel carrying its flag that was found to be carrying arms related material."

The committee responded with a letter saying the transfer of the material was a violation of a 2007 Security Council resolution that prohibits Iran from transferring any arms or related material and requires all countries to prohibit the procurement of such items from Iran, Takasu said.

He told the council that the committee sent letters "to concerned member states" on March 9 asking for "any relevant information regarding this transaction" within 10 days.

Copies of the letters to Iran and Syria, obtained by The Associated Press, said the ship's manifest indicated that the Monchegorsk was chartered by the Islamic Republic of Iran Shipping Line, and that the cargo was loaded in Iran and was to be unloaded in Lataki, Syria.

The letters said the committee had received the results of inspections conducted on Jan. 29 and Feb. 2 on a portion of the cargo which found arms-related material, including items described as "bullet shells," high explosive shells, 125 mm armor-piercing shells, and high explosive anti-tank propellant.

All 15 Security Council nations are members of the sanctions committee, which means the letters and Takasu's report had the backing of the entire council.

U.S. Ambassador Susan Rice condemned the sanctions violation. She made no mention of reports from European diplomats that the U.S. Navy intercepted the Monchegorsk, confirmed the presence of arms-related material and alerted Cypriot officials.

Cyprus, with its nearest coastal point only 60 miles west of Syria, has traditionally been close to the Arab world. But the Greek-majority island is geographically part of Europe and joined the European Union in 2004.

There has been no decision on what to do with the cargo, though Britain has signaled that it is ready to help Cyprus dispose of it.