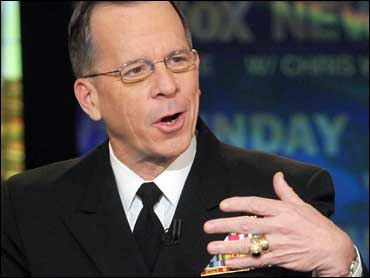 The top U.S. military official said Sunday that Iran has sufficient fissile material for a nuclear weapon, declaring it would be a "very, very bad outcome" should Tehran move forward with a bomb.

Adm. Mike Mullen, chairman of the Joint Chiefs of Staff, offered the assessment when questioned in a broadcast interview about a recent report by the U.N. nuclear watchdog on the state of Iran's uranium enrichment program, which can create nuclear fuel and may be sufficiently advanced to produce the core of warheads.

Mullen was asked if Iran now had enough fissile material to make a bomb. He responded, "We think they do, quite frankly. And Iran having a nuclear weapon I've believed for a long time is a very, very bad outcome for the region and for the world."

State Department spokesman Robert A. Wood said Sunday that it was not possible say how much fissile material Iran has accumulated.

"There are differing view not only outside government but also inside the government" on how far Iran has gone, Wood said. He added that while he was not suggesting Mullen was incorrect, "We just don't know" exactly how much fissile material Iran now holds.

"We are concerned they are getting close" to having enough to build a nuclear weapon, he added. Wood spoke to reporters traveling with Secretary of State Hillary Rodham Clinton in Egypt.

The International Atomic Energy Agency said Iran has processed 2,222 pounds of low-enriched uranium. But the report left unclear whether Iran is now capable, even if it wanted, of further processing that material into a sufficient quantity of highly enriched uranium to arm one weapon.

Defense Secretary Robert Gates, who like Mullen appeared on the Sunday talk shows, did not go as far as Mullen. The Iranians, Gates said, are "not close to a weapon at this point and so there is some time" for continued diplomatic efforts.

And the U.S. ambassador to the United Nations, Susan Rice, recently told National Public Radio that the IAEA report "confirms what we all had feared and anticipated, which is that Iran remains in pursuit of its nuclear program."

Iran, now subjected to various penalties by the U.N., the U.S. and others over its nuclear program, denies it wants to build a bomb. It asserts its program is intended to provide the country with the homegrown ability to generate electricity from nuclear reactors.

So far, the U.S. has not relented in its claims that Iran has ambitions to join the club of nuclear-armed nations. Mullen seemed to restate that position in his remarks on CNN's "State of the Union." He was not asked to elaborate.

Under an international nuclear treaty it has signed, Iran has the right to develop a civilian program for the nuclear generation of electricity. But any such program must be open to international inspection. Iran has balked at that after it became known in past years that the country had hidden portions of its nuclear effort that could be linked to a weapons program.

At issue now is Iran's uranium enrichment efforts. The Bush administration insisted that was a precursor to making weapons-grade materials. President Barack Obama has sought to change course with Iran, offering diplomatic engagement in a bid to prove Tehran has more to lose by ignoring the wishes of other countries than it has to gain through its nuclear efforts.

"The question is whether you can increase the level of the sanctions and the cost to the Iranians of pursuing that program at the same time you show them an open door if they want to engage with the Europeans, with us and so on if they walk away from that program," Gates said. "Our chances of being successful, it seems to me, are a lot better at $35 or $40 oil than they were at $140 oil because there are economic costs to this program, they do have economic challenges at home."

Days after Obama announced his plan to withdraw U.S. combat forces from Iraq by Aug. 31, 2010, Mullen and Gates made clear their support for the commander in chief's approach.

Mullen said he was comfortable with the decision, while noting he was reluctant to talk about "winning and losing" in Iraq. Rather, he said, the conditions are in place for the Baghdad government to successfully take control of the country.

Mullen said Obama listened extensively to the American military leadership and U.S. commanders in Iraq before announcing withdrawal. Under the president's order, the 142,000 U.S. forces in Iraq would be drawn down to between 35,000 and 50,000 troops by the 2010 date. All forces would be withdrawn by the last day of 2011.

Gates said he thought it was "fairly remote" that conditions in Iraq would change enough to alter significantly the Obama plan. He said the president has said he retains the authority to change a plan if it's in the national security interests of the United States.

"Our soldiers will be consolidated into a limited number of bases in order to provide protection for themselves and for civilians who are out working in the Iraqi neighborhoods and countryside as well," Gates said. "The risk to our troops will be substantially less than certainly was last year, and it has, has gradually declined."

Gates appeared on NBC's "Meet the Press," while Mullen also was interviewed on "Fox News Sunday."