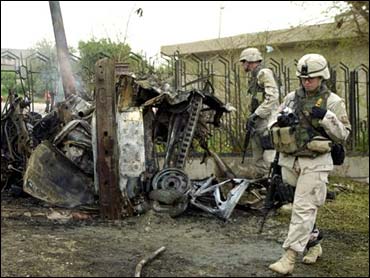 Insurgents detonated a car bomb Thursday near a U.S. military convoy in Baghdad and a roadside bomb exploded at a job recruiting center in the northern city of Kirkuk, in attacks that killed four people, police and officials said.

Elsewhere, insurgents fired mortars at the provincial administration offices in the northern city of Mosul, wounding four of the governor's guards, the U.S. military said

The rest of Mosul, Iraq's third largest with more than a million residents, remained calm for a second day since the U.S.-led offensive operation began on Tuesday to wrest control of the western part of the city from insurgents.

Last week, gunmen stormed police stations, bridges and political offices, overwhelming police forces who, in many places, failed to even put up a fight. Some officers also allegedly cooperated with insurgents.

The U.S. military said that up to 2,500 U.S. and Iraqi troops met "little resistance" during operations to re-secure police stations and key bridges in Mosul from the insurgents.

Thursday's attacks came a day after a wave of violence in Iraq's Sunni Muslim heartland killed at least 27 people and U.S. forces pursued the remaining holdouts in the former insurgent bastion of Fallujah.