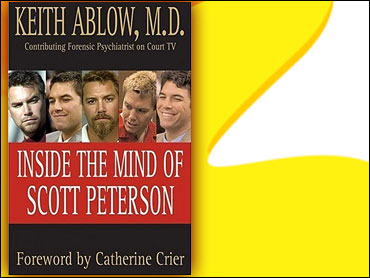 Excerpt of "Inside the Mind of Scott Peterson," by Keith Albow, M.D.

Before reading this book, you may have believed that the story of the murders of Laci Peterson and her unborn son, Conner, began on Christmas Eve, 2002. That was, after all, the evening Scott Peterson asserted that he had returned home to find Laci's Land Rover in the driveway of their Modesto, California, home, and the couple's golden retriever, McKenzie, in the backyard, alone, with his leash on. At 5:17 PM he telephoned his mother-in-law, Sharon Rocha, and told her, "Laci is missing."

If not that fateful Christmas Even, you might believe the story began a month earlier, on November 29, 2002. That was the night Scott Peterson first met Amber Frey, the pretty, blond, single mother who worked as a massage therapist. The couple shared a drink at the Elephant Bar in Fresno, then dinner at an intimate Japanese restaurant, then a bottle of gin, then had sex in Peterson's room at the Radisson Hotel. Within two weeks Peterson was picking up Frey's daughter, Ayiana, at school and cooking dinner for what looked like an instant family—one he may have preferred to Laci and Connor.

Or you might open the curtain on the murder mystery earlier still. Paying homage to the theory that the pressures of impending fatherhood began to unravel Peterson's psyche, you might begin the day Laci Peterson conceived Connor, about seven months before her husband killed her, weighted down her body, and dumped it in the San Francisco Bay.

There are those, in fact, who see the roots of Scott Peterson's vicious act reaching back years to his discomfort with marriage itself, evidenced by repeated acts of infidelity, including a 1998 affair with Janet Ilse, who once walked in on Peterson and his wife in bed.Others assert that Peterson was evil incarnate, that the story of the murders of Laci and Connor should begin with Peterson's birth at San Diego's Sharp Hospital on October 24, 1972.

I have a different story to tell. Having researched Scott Peterson and his family of origin by hiring investigators, interviewing relatives, friends, schoolmates, and lovers, placing newspaper advertisements on the West Coat seeking anyone with knowledge of his childhood, posting a Web site dedicated to learning of early traumas in his life, and reading and watching everything I could find in print or on tape about him, I am convinced that Laci and Connor lost their lives to a psychological "perfect storm" that began gathering over the Peterson family over five decades ago and reached hurricane strength in the psyche of Scott Peterson.

The road to the 2002 murders of a young woman full of life and the innocent child she carried truly began on December 20, 1945.

In addition to many sources who wished to remain anonymous, including first-degree relatives of Scott Peterson, I have interviewed his father, Lee, his uncles John Latham and James Patrick Latham, his sister-in-law Jennifer Peterson, his half brother Mark Peterson, and his former lover Lauren Putnat. Anne Bird, Scott's half sister (and author of Blood Brother: 33 Reasons My Brother Scott Peterson is Guilty) shared invaluable insights into him and other members of the Peterson family. Catherine Crier, in addition to providing the Foreword to this book, generously made available several of the sources for her number-one New York Times bestseller A Deadly Game. Amber Frey's attorney, Gloria Allred, graciously provided me her perspective. And even Sharon Hagan, a profiler for the Modesto Police Department who worked on the Peterson investigation, freely gave me her insights.

After I began outlining the beginnings of my theory about Scott as a guest on The Oprah Winfrey Show, I received hundreds of e-mails from viewers who said it helped them understand the truth about him for the first time. It made it possible for them to actually see into his soul. Anne Bird and Laci's mother, Sharon, agreed. And other members of Scott Peterson's family have since.

I am a forensic psychiatrist. My work has included evaluating dozens of murderers, rapists, pedophiles, and other violent criminals and testifying about them in district, state, and federal courts. Without exception, my task has been to find the story that explains not what happened to victims but why it happened—why some people destroy others. In order to do so, I have had to journey deep into the psyches of men and women without empathy, capable of brutal acts. And I have become a relentless burrower for the truth about such people. My mind does not rest until I find it. Because once I do, I have my reward: I realize again that nothing and no one is beyond human understanding—not even those we call monsters.

It has been no different with Scott Peterson. I have spent countless hours on this journey into his mind, sleepless nights when I forced my thoughts in the direction his must have gone the day he took the lives of his wife and unborn child. I have forced myself to feel what he might have felt as he drove home after leaving them in the Bay.

I am certain that I know. Now you will, too.

From the book, "Inside the Mind of Scott Peterson," by Keith Ablow, M.D., contributing forensic psychiatrist on Court TV. Copyright © 2005 by the author. Reprinted with permission from St. Martin's Press, LLC.