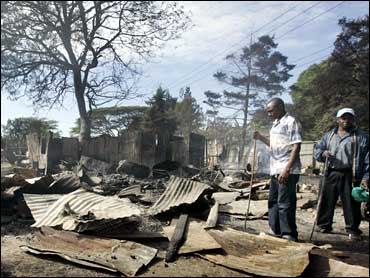 This column was written by Travis Kavulla.

In the wake of ethnic violence that has left 300 people dead following an apparently rigged presidential election on December 27, there has been widespread disbelief at what has happened. Kenya is not in the same league as Somalia of today, or Rwanda of 1994. It is one of Africa's best-off countries, with high productivity, one of the world's freest presses, and a capital city whose business district would not look out of place in Europe or America. While Kenyans for four decades lived under a self-serving dictatorship that manipulated tribal politics and so rendered elections futile exercises, Kenya's free and fair polls in 2002 were supposed to have spelled the end of all that.

This time around, the campaign season was an extravaganza aimed at the workaday voter - a remarkable notion in African politics. Pork was promised wide and far. The candidates were branded (the incumbent Mwai Kibaki cast as the elderly economist who quietly gets things done; his challenger Raila Odinga, the visionary populist who had been imprisoned under the dictatorship for the sake of Kenya's democracy). Each presidential campaign spent millions of dollars on television advertisements. Mwai Kibaki, the president seeking a second term, had a special campaign targeting the disabled; Raila Odinga, his challenger, hired Dick Morris as a consultant. The campaigns, in short, were as refined as a Western democracy's.

And on Election Day itself, anyone with a soft spot for representative government could not have failed to be touched. In the capital, lines snaked for kilometers outside of municipal buildings, voters at the front saying without a note of anger or regret that they had been there for seven hours. There even seemed a sense of public-spiritedness that is frequently absent in African countries, where family, clan, and tribe count for so much more than the colonial artifice that is an African's country. Several bars set out signs reading Onyesha kidole (Swahili for "Show your finger" - that is, one's pinky marked with indelible ink), and refused to serve those who had not voted.

The exercise was orderly to a tee, no violence anywhere in the country, and though names beginning with the letter "O" and "A" (disproportionately belonging to the Luo tribe, with names like Odinga, Awolo, Obama, etc., and likely to support their tribesman-cum-contender) went missing from a number of voter rolls, the problem was soon rectified to everyone's satisfaction.

For that first night after the polls closed, things were quiet, results barely trickling in. People graciously understood the delay: Kenya is a big place, and counting is a slow process. Counting stretched overnight, and then well into a second day. People began to get tense; shops closed, hotels barred their doors at night and encouraged their patrons not to go onto the streets. By the late hours of the night Odinga, the opposition candidate, had taken a formidable lead and his supporters on one hand rejoiced and the on the other became worried that the official results had not been announced. Confronted with this anxiety from all quarters, the Electoral Commission of Kenya (ECK) professed ignorance and confessed that the Returning Officers of some two dozen constituencies - those officials, in the British system, who solely have the power to announce results from an area - had gone missing for the better part of the day, one of them last seen by European observers saying he was "too tired" to announce his area's presidential results after he had concluded reading the returns of the municipal government. The ECK announced that it would make no more announcements until the following day.

By the next morning, on December 30, the streets of Nairobi had become no-go areas because of skirmishing between the police and "the youth" - the euphemism used to describe those men of all ages whose misbehavior is condoned and even encouraged by party operators when things don't go their way, the youth's pay being whatever can be looted.

The real drama, however, had been unfolding at the premises of Jomo Kenyatta International Conference Center, a vast premises whose Jogoo Tower (Rooster Tower - the emblem of the founding and, for a long while, only party) is Nairobi's tallest structure, and which is complemented, fittingly, by an egg-like conference hall in which the electoral commissioners after much ado convened. And wouldn't you just know it…. The incumbent had surged from behind and overtaken his challenger with thanks to those last constituencies, which had been so delayed because there were just so many patriotic citizens who had showed up on Election Day. Turnout was in some places over 100 percent! At the same time, reports were filtering in about even those constituencies that had reported earlier, to the effect that the figures announced at election headquarters in Nairobi did not sync up with those announced on the ground. Each such discrepancy added, as it happened, somewhere between 10,000 and 20,000 votes to the Kibaki's total. In the face of protests, the ECK said the results were final. Its chairman was chauffeured to the State House to deliver the certificate of office to the president, and there found him waiting, curiously, with the chief justice. Mwai Kibaki was sworn in a quarter-hour later.

And so was an election rigged - clumsily, even by African standards. In the face of an opposition coalition that had been set up to win, violence was inevitable. And it was not hard to predict on whom it would be focused: Kibaki is a Kikuyu, and he won 98 percent of his tribesmen's votes, perhaps one-quarter of the electorate; even according to the doctored figure, Odinga received the votes of around 75 percent of his tribe. Beneath the image of an African democracy based on issues resides this harsh tribal reality. Within half an hour, arsonists outraged at Odinga's loss had set fire to Kikuyu properties in four large cities. Another half hour and images of smoke billowing from Kibera, one of the continent's largest slums, in Nairobi, were being broadcast on television. (Two hours later, all live television broadcasts were ordered suspended by the Ministry of Internal Security.) Over the night, an untold number of people died; just over 100 if the Kenyan government is to be believed, though the likelier figure would probably have another zero on the end of it.

After two days of mayhem, the public markets of Kibera - an improvement of infrastructure that was the major accomplishment of Kibaki's first-term government in the area - were almost entirely destroyed by arsonists; tens of thousands of its non-warring inhabitants had become "internally displaced persons," in the lingo of the United Nations, residing at Nairobi's parks and stadiums. The police tried limply to impose order on the first day, but now behave more or less as a party to the conflict, avenging with torture and death those, and the relatives and friends of those, who bring harm to an officer. In any case, their presence is slender, and the real heavy work is being left to the Mungiki, a Kikuyu gang with ruling-party political connections that fancies itself a latter-day incarnation of the Mau Mau insurgents, who hacked to death whole families in the 1950s for the cause of self-rule. As in the usual course of things, the Mungiki comprise mere thugs extracting protection money from bus operators and small businessmen in the slums; but their misbehavior is overlooked by many a Kikuyu politician so that at special occasions they may be called upon, as now, to quiet - their preferred method is beheading - querulous supporters of the opposition party. A rival gang, called the Taliban, performs the same service for other parties.

One week after elections, all signs of life are gone from several major towns in western Kenya - a grim omen for the reelected president whose slogan was "kazi iendelee!" (work continues!). Kenyans in all places are largely unaware of what is happening in the higher circles of politics. The media is still subject to an almost entire black-out. There are no live television transmissions. And though the newspapers report the occasional atrocity - on New Year's Day, 35 Kikuyu, mostly women and children and including a woman in a wheelchair, burned alive as they were taking refuge in a church - the more widely received radio programs' top story was, "Desmond Tutu holds two-hour talks with Odinga, urges calm." Through cell phones, rumors have been rampant, and the devices have sometime seemed tribalism's best weapon as one group organizes raids on another. Indeed, every Kenyan cellular number has received a text message in recent days which read: "The Ministry of Internal Security urges you to please desist from sending or forwarding any SMS that may cause public unrest. This may lead to your prosecution."

Whether this violence continues or gives way to some calmer, political process largely rests on the politicians, who have thus far given no ground. Kibaki says he wishes to move past the elections and then get on with "reconciliation," while Odinga refuses to speak with Kibaki until the president acknowledges he was not legitimately elected. In the meantime, a terrible blow has been dealt to what seemed to be one of Africa's most sophisticated democracies.
By Travis Kavulla
Reprinted with permission from National Review Online