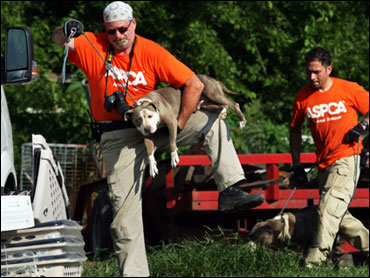 NEW YORK (CBS) More than 350 dogs were seized and about 30 people arrested during raids in five states Wednesday that animal welfare groups are calling the largest simultaneous raid of dog-fighting operations in the U.S.

U.S. attorneys in four of the states announced related indictments accusing 26 people of cruelties ranging from denying animals medical treatment to shooting dogs in the head when they didn't fight well, then throwing their carcasses into a river or burning them in a barrel.

"These are animals which are so eager to please. Yet they have been bred to fight and die for human amusement," said Dr. Randall Lockwood, a senior behavioral psychologist for the American Society for the Prevention of Cruelty to Animals, which worked closely with law enforcement on the raids. "I do see dog-fighting as the greatest violation of that special bond between people and dogs."

Lockwood said there could be as many as 500 rescued dogs at a temporary facility the agency helped to set up in St. Louis, Mo., to provide medical and psychological evaluations for the animals.

Task forces of federal, state and local law enforcement agencies conducted the raids and made arrests in Missouri, Illinois, Iowa, Texas and Oklahoma following a more than year-long investigation prompted by information gathered by the Humane Society of Missouri. It wasn't clear whether or to what extent the operations were related.

Kathy Warnick, president of the Humane Society of Missouri, said tips had come in from "multiple sources" about dog-fighting and anticruelty workers worked with federal authorities for 18 months. "This heinous, heinous blood sport is not going to be tolerated," she said.

The national Humane Society said there also were arrests in Arkansas associated with dog-fighting, but no dogs were seized.

Dog-fighting is banned throughout the United States and is a felony in 50 states. A law enacted two years ago increased penalties for activities that promote or encourage animal fighting after a long campaign by animal-welfare groups.

Wayne Pacelle, president and chief executive officer of the Humane Society of the United States, said dog-fighting operations typically are not small acts of animal cruelty, but part of organized criminal networks.

"This was quite an operation and marks the latest in a series of actions that are driving dog-fighting, we hope, off the cliff," Pacelle said.

The Humane Society of Missouri, working with other agencies, is sheltering hundreds of dogs; believed to be mostly pit bull terriers; seized in Missouri and Illinois raids and their conditions are being assessed. The dogs will be housed, cared for and evaluated at an undisclosed emergency shelter in St. Louis.

HSUS spokeswoman Jordan Crump, a spokesman with the Humane Society of the United States, said each dog seized in all the raids will be evaluated by behavioral experts in hopes of placing as many as possible in adoptive homes.

But the future is uncertain for many of the rescued animals.

"Many if not most of the animals will be euthanized. They have medical or behavioral issues that prevent them from being placed in homes," said Lockwood of the ASPCA. "The greatest kindness that might be shown to them is a humane death." 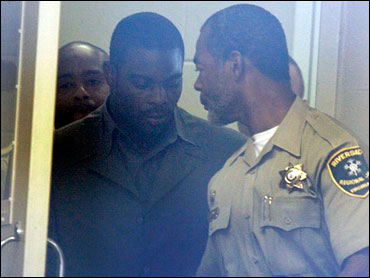 Many of the dogs seized from Michael Vick's Bad Newz Kennels in the former Atlanta Falcons quarterback's dog-fighting case fared better. Animal welfare groups said most were able to be placed in homes or sent to an animal sanctuary.

"The Vick case taught us to see dogs in these cases as victims," said Donna Reynolds, with the Oakland, Calif.-based pit bull rescue and education group Bay Area Doglovers Responsible About Pit bulls, or BAD RAP.

"Animal welfare organizations will have to come together to ensure animals are comfortable in their confinement and they have the best opportunity to be evaluated, and if possible, offered rescue resources," Reynolds said.

Seven people from Missouri, Iowa and Nebraska were indicted by the U.S. Attorney's office in western Missouri. The indictment said the seven acquired, bred and trained pit bull dogs for fighting and denied medical treatment for wounds and injuries. One man used a .22-caliber rifle to shoot and kill two underperforming dogs, who fought in roll fights, shot each animal twice in the head, then placed the carcasses in plastic containers outside a garage, according to the indictment. 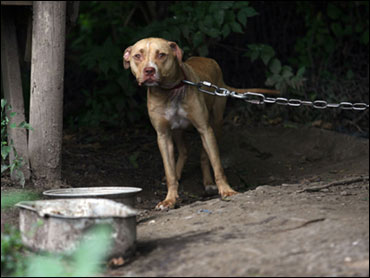 The men routinely abandoned, destroyed and disposed of pit bull terriers that lost fighting competitions, did not perform aggressively, or became injured or disabled while fighting, the St. Louis indictment said.

The U.S. Attorney's office in eastern Texas said nine people were indicted June 30 on dog-fighting charges there. Two FBI task force officers working with a confidential informant posed as dog owners and attended fights in Texas and Oklahoma, according to the indictment. They managed to get video and audio from Jan. 17 fights near Tahlequah, Okla., by accompanying suspects to a remote country building for three dogfights, the indictment said.