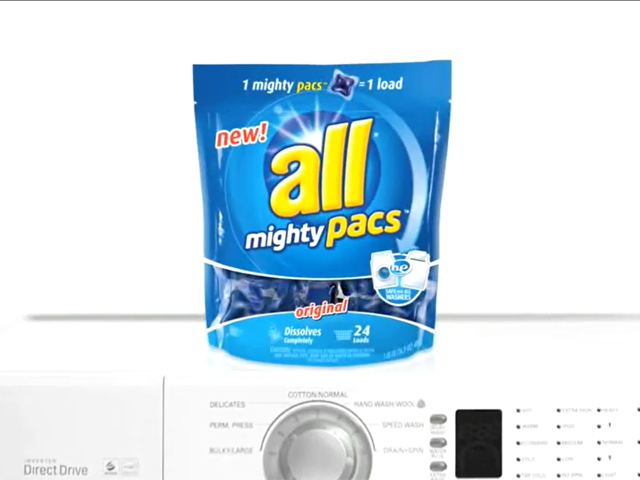 An infant has reportedly died after ingesting a laundry detergent pod in what's being called the first death of its kind.

The 7-month-old boy, Michael Williams of Kissimmee, Fla., got a hold of the detergent pods at a battered-women's shelter after his mother placed them inside a laundry basket on the bed where her son was sleeping, the Orlando Sentinel reported Thursday. She stepped away for a moment. When she returned, she saw the boy had eaten one of the All Laundry Detergent's Mighty Pacs and was starting on a second one, Kissimmee police spokesperson Stacie Miller told the paper.

When emergency responders arrived, the child was coughing. He was transported to Osceola Regional Medical Center in Kissimmee, where his condition deteriorated and he passed away.

The Florida health department confirmed the child ingested the laundry packet, but said it will take weeks before an official confirmation of the cause of death can be reported.

"The death of little Michael is a tragedy," Florida Department of Children and Families spokesperson Terri Durdaller said to the Sentinel. "It reminds all of us as parents the dangers of leaving household cleaning supplies around our little ones."

The website for All Mighty Pacs Pods warns that the products are harmful if they are put in the mouth, and the products should be kept out of reach from children and pets.

The tragic news puts a spotlight on a health risk for children that officials have been warning about.

Doctors began alerting the public of the risk for detergent packets beginning as early as March 2012, when poison control centers saw a concerning uptick in calls for children who had ingested the concentrated pods.

By last October, the Centers for Disease Control and Prevention had sounded the alarm for doctors to be on the lookout for symptoms tied to the dangerous trend.

"Clinicians should be aware that all household cleaning products and detergents have the potential to cause illness, but that laundry detergent pod exposures might represent an emerging public health concern," the CDC warned in its Oct. 19 report published in its journal, Morbidity and Mortality Weekly Report.

That study compared pod-related poisonings to cases linked to other detergents, and found about 48 percent of the 1,000-plus detergent poisonings that occurred over a one month period in 2012 were from exposures to the pods.

About 94 percent of pod exposures were in kids 5 and younger.

As of the end of July 2013, there have been more than 5,750 calls to local poison centers for pod-related exposures in children under 5, according to the American Association of Poison Control Centers.

Dr. Michael Lynch, an assistant professor of pediatric emergency medicine at the University of Pittsburgh School of Medicine, who also serves as medical director of the Pittsburgh Poison Center, has seen a steady number of calls to his poison center since they first began receiving reports in March 2012. In Pittsburgh alone, they've received 195 calls since last March, 178 of which involved children younger than 6 years old.

"Everyone's seeing it probably across the country," Lynch told CBSNews.com.

Common signs a child ingested a detergent pod include gagging, coughing, vomiting, wheezing and drowsiness. Lynch points out a reaction can range from a mild burning of the mouth and gagging that goes away after a few minutes, to more severe burns and injuries to the lungs that require breathing tube intubation. There may also be damage to the gastrointestinal tract and lining of the stomach.

Calling the National Poison hotline at 800-222-1222 can connect you to a local poison center. A specialist can then determine if the child needs to get emergency treatment, because Lynch points out not all of these patients need to be rushed to a hospital. The call can not only safe a child's life, but also a costly, unnecessary trip to the doctor if the risk is only minor, he added.

"If the child is clearly very ill or having difficulty breathing, the ambulance should be called right away," Lynch recommended. "Without symptoms yet, just call the poison center."

Keeping the products up high and out of reach of kids could help prevent these tragedies from occurring. Also, not removing the pod from the container until you're ready to use is also recommended.

Proctor & Gamble, parent company of Tide, which also manufactures detergent pods, announced plans last October to create a new double latch lid to reduce risk. This July, the company announced its new packaging plans to change the colors of the packaging, which the AAPCC commended in a statement.

"The Procter & Gamble product had been sold in clear packages in which the colorful packets were easily visible to children," read the statement. "Making the packaging opaque hopefully will help reduce the temptation of children to get into the product."

The parent company of All Detergents, The Sun Products Corporation, also is changing the design of its packets.

"We have not been directly notified by authorities what product was involved, however we have heard indirectly that the detergent was 'all Mighty Pacs," Kathryn Corbally, spokesperson for parent company Sun Products Corporation, said in an email to CBSNews.com. "Regardless of the brand, this is a tragic accident and our thoughts and prayers go out to the family of the child who died, as well as to the staff of the shelter where the tragedy happened.

She noted the products began transitioning to an opaque packet earlier this year.

"All of us at Sun Products are saddened to hear of this tragedy. It reinforces the importance of continued aggressive efforts to educate about proper use and storage of household cleaning products, including detergents," she added.