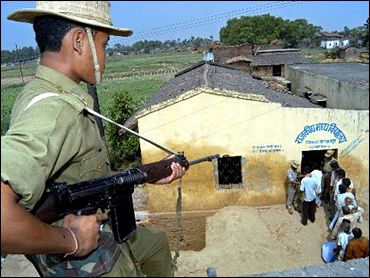 Undeterred by kidnappings, deadly rebel attacks and 113-degree heat, Indians cast ballots Tuesday in the first day of three-week parliamentary elections that are expected to return the prime minister's governing coalition to power.

Rebels from the disputed province of Kashmir to India's isolated northeast have promised to sabotage the vote, a gigantic undertaking in the world's largest democracy. They killed at least 15 people and wounded 18 in attacks across the country.

Still, violence is relatively routine during Indian elections — at least 100 people died in the last national poll in 1999. Voters appeared ready to reward Prime Minister Atal Bihari Vajpayee for the booming economy and efforts that have made prospects for peace with rival Pakistan their best in years.

"I came to vote because I wanted to recognize the good work done by the government," said Mohanlal Pashan, 70, a retired state employee in Bangalore, India's information technology hub. "For me, the most important issue is economic progress."

The massive election will be staggered in five phases over three weeks ending May 10 to accommodate the country's 660 million voters, with counting to begin three days later. Voter turnout Tuesday was 50 percent to 55 percent, according to the Election Commission.

About 400,000 police and troops were deployed to protect candidates, voters and poll workers, and air force helicopters patrolled some of the more threatened districts.

Opinion polls have predicted Vajpayee's National Democratic Alliance would return to power, but his party was not expected to win an outright majority and could even lose a few seats.

The opposition Congress party, which headed India for nearly four straight decades under the leadership of the Nehru-Gandhi dynasty, faces an uphill battle. Congress claims India's rural poor have been left behind by the government's push for economic growth.

Islamic militants opposed to India's control over portions of Kashmir were blamed for fatally shooting a paramilitary soldier guarding a polling station and a separate bomb attack in the region that wounded six civilians, including two poll workers.

The militants say the elections legitimize what they see as India's occupation of the Himalayan region, and they have threatened attacks on anyone participating in the polls.

A car filled with Indian journalists and human rights activists on their way to monitor polling stations exploded when it ran over a land mine in Kashmir. The driver and a human rights activist — Asiya Geelani of the Association of Parents of Disappeared Persons — were killed and four others were wounded.

Maoist rebels have ordered an election boycott in the isolated northeastern states of Jharkhand and Bihar. Two suspected Maoist rebels, a national guard reservist, two police officers, a voter, polling agent and a magistrate were killed and four officers and a voter wounded in election-related violence in the two states.

In Manipur, another restive northeastern state where the outlawed United National Liberation Front threatened voters with "dire consequences" if they went to the polls, rebels took electronic voting machines from polling centers Tuesday. Militants also kidnapped 30 polling officials, according to P. Doungel, a deputy with the Manipur police.

Four soldiers on poll duty were killed and three others injured when the People's Liberation Army attacked them near the Myanmar border overnight, deputy police chief Joykumar Singh said.

Just as worrisome as violence in some places was the weather, with temperatures running as high as 113 degrees.

In Gauhati, capital of northeastern Assam state, flooding in the last 10 days meant officials had to reach polling stations by boat, bullock cart and elephant.

For the first time, electronic voting machines were being used in India. Election officials transported about 1 million computerized voting machines to 188,975 polling places, some in deserts, remote hilltops or Himalayan valleys.

"I am excited that I am not lagging behind but also operating a modern machine," said farmer Babul Deka in the northeastern state of Assam.

But the machines developed problems in some parts of the country, forcing voting to be suspended briefly while being fixed.

Some 1,500 leprosy patients were carried by volunteers into polling booths in Anandvan, 430 miles north of Bombay, India's financial capital on the western coast.

"Many of them have no fingers or toes," said Vikas Amte, whose father founded a home for leprosy patients in 1949. Nevertheless, he said: "They are very cheerful today because they feel they are a part of society because of their voting right."