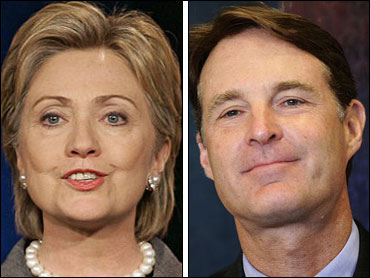 Sen. Evan Bayh of Indiana, who once aspired to the Democratic presidential nomination, on Monday endorsed Hillary Rodham Clinton's bid for the White House.

"I believe she will run a campaign that is both tough and smart when it comes to protecting our nation's security," Bayh said at a news conference with Clinton.

Bayh, a former governor of a Republican-leaning state, is in his second term in the Senate. He won re-election with 62 percent of the vote in 2004 and is considered a possible Democratic vice presidential choice in 2008.

A colleague of Clinton's on the Senate Armed Services Committee, Bayh pursued a possible presidential bid until late last year when he dropped out of the race amid evidence that Clinton and Sen. Barack Obama of Illinois were building formidable campaign organizations.

Clinton said she agreed with Bayh, a centrist, that "Democrats should campaign everywhere in America." He was named a national co-chair of her campaign.

But she demurred when asked whether she was considering Bayh as a potential running mate, CBS News' Fernando Suarez reports. "It goes without saying that his record of public service is extraordinary," Clinton said. "I have the highest personal and professional regard for him."

Clinton and Bayh traveled together to Iraq in January, just before Clinton announced she would seek the Democratic nomination. Bayh is one of several potential presidential contenders who have abandoned their own bids to endorse her.

"Hillary Clinton is a seasoned, experienced leader who will be ready to lead this country on Day One," Bayh said.

Earlier this year, Obama suggested that only former President Clinton would be ready from Day One, slighting Sen. Clinton.

Bayh's endorsement was not the only one Clinton picked up Monday. She also received the support of the International Union of Bricklayers and Allied Craftworkers, which said she has the best chance to win the presidential election.

"Hillary Clinton has the strength and experience to deliver the change America needs," union president John J. Flynn said. "After years of an administration that has turned its back on working families, we need a president whose priorities are our priorities."

This is Clinton's fifth union endorsement, the largest number of any presidential candidate so far.

Meanwhile, one of the largest municipal jail unions in the country said Monday that it will endorse Obama for president. The endorsement would be Obama's first from a union.

"Barack Obama is the one candidate who will put an end to the divisiveness in this country so that we can finally achieve greater economic prosperity for the working class and health care coverage for all Americans," said Norman Seabrook, the president of the New York City Correction Officers' Benevolent Association.

The group has about 9,000 active members.