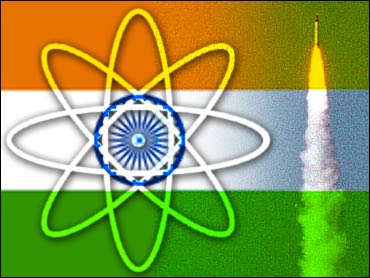 India test-launched a short-range ballistic missile capable of carrying nuclear weapons on Thursday, but said it was a routine trial and had nothing to do with recent posturing by Pakistani and Indian military officials.

The Agni I missile was fired from the Chandipur-on-Sea testing range on the coast of eastern Orissa state, said Defense Ministry spokesman P.K. Bandyopadhyay.

Such test firing is routine, but it came as the Indian and Pakistani governments were in the midst of a war of words, threatening each other with possible nuclear consequences if either takes aggressive military action.

"Apparently, the test of the Agni missile is part of India's continued policy of imposing its hegemony in the region, but we are hardly impressed with what they have done," Pakistani Information Minister Sheikh Rashid Ahmed told The Associated Press in Islamabad.

India and Pakistan — at odds since they gained independence from Britain in 1947 — came to the brink of a fourth war last year after New Delhi accused Islamabad's spy agency and Pakistan-based Islamic rebel groups of attacking the Indian Parliament in December 2001. Pakistan denied it.

Intense diplomatic pressure by the United States and others reduced tensions somewhat. Both sides were persuaded to pull back hundreds of thousands of soldiers from their border in October.

However, the Indian press notes that, unlike the Clinton administration, President Bush has not objected to India's nuclear weapons. As India announced its nuclear strategic command and the increase in the number of nuclear warheads and command centers in case of war, reports CBS News' Ranjan Gupta, it has been pointed out there has not been a word from Washington about India's nuclear program. In fact, there may even be tacit support. Nor, for two years, has there been any discussion between India and the U.S. about India's nuclear weapons nor criticism like that leveled by Clinton administration Secretary of State Madeleine Albright.

Journalists at the Chandipur site said the test was witnessed by Indian Defense Minister George Fernandes, who on Tuesday made a chilling prediction of how a nuclear war would turn out.

"There will be no Pakistan left when we have responded," he told a business gathering in southern India. He reiterated India's policy of not striking first with nuclear weapons.

Fernandes was reacting to Musharraf, who on Dec. 29 told a group of air force veterans that he had personally warned India during last year's hostilities to "not expect a conventional war from Pakistan."

His spokesman quickly denied the president was referring to nuclear weapons, and Musharraf said later he meant only that some 150,000 retired Pakistani military personnel living in Kashmir would have risen up against any Indian aggression.

U.S. Ambassador to India Robert Blackwill said last year that there was a "small" chance of nuclear war between India and Pakistan at the height of tensions, when about 1 million troops were deployed on their border.

The main dispute between the two countries — and the focus of two of their three wars — is their conflicting claims to the Himalayan region of Kashmir, which is divided between them.