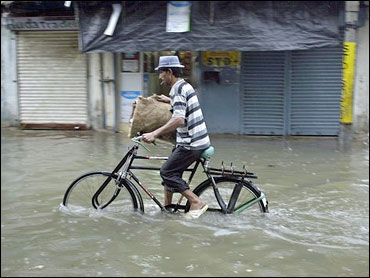 Authorities have recovered at least 200 bodies in western India after the heaviest rainfall ever recorded in the country, an official said Wednesday.

He said the figure included 83 dead in Bombay, the state capital and financial hub.

Another 100 deaths were feared across the state, which has been pounded by incessant rainfall since Tuesday, he said.

The rain shut down Bombay, snapping communication lines and closing airports.
The deaths were caused by electrocution, people getting trapped in cars, drowned in swirling flood waters and buried by falling walls.

Troops were deployed after the sudden rains - measuring up to 37.1 inches in one day in suburban Bombay, the capital of Maharashtra state - stranded tens of thousands of people.

"Most places in India don't receive this kind of rainfall in a year. This is the highest ever recorded in India's history," R.V. Sharma, director of the meteorological department in Bombay, told The Associated Press. "We have to compare it with world records to find out if this was the highest in the world."

At least 62 people died in Maharashtra and southern Kerala state in weather-related tragedies on Tuesday.

On Wednesday, at least 25 people drowned after being trapped in cars or crushed by falling walls, said Chief Minister Vilasrao Deshmukh, the state's top elected official.

"Twenty five to 30 people were killed in Bombay. The situation is very grave," he was quoted as saying on the Web site rediff.com. He said the deaths included seven children killed in a landslide in suburban Bombay's Andheri district.

Early Wednesday, he ordered a two-day holiday and called the army, navy and home guards to help with relief.

"Inflatable rafts will be used to reach stranded people. Please try to stay where you are and don't leave your homes," he said.

The state-run All India Radio reported about 150,000 people were stranded in railway stations across Bombay.

Roads were choked all night as tens of thousands of people were stranded, and the two main highways were inundated. The domestic and international airports in Bombay, among the busiest in the country, have been shut down since Tuesday evening, and all incoming flights were being diverted to New Delhi and other airports.

India's previous heaviest rainfall, recorded at Cherrapunji in the northeastern Meghalaya state - one of the rainiest places on Earth - was 83.82 centimeters (33 inches) on July 12, 1910, Sharma said.

"Never before in Bombay's history has this happened," said Bombay's Police Commissioner A.N. Roy. "Our first priority is to rescue people stranded in floods."

Rescuers started arriving Tuesday night in Kondivali village, 95 miles south of Bombay, hoping to extricate nearly 100 people trapped there, said police officer S. Jadav. At least 30 more people were feared buried in another mudslide in the nearby village of Jui.

"We have no information from them, all lines are dead," said another officer P. Ranade.

The Press Trust of India news agency reported at least 34 people were killed in landslides in Kondivali, and another 20 elsewhere in Maharashtra.

India's monsoon rains, which usually last from June through September, claim hundreds of lives every year. Over 230 deaths were reported earlier this season.