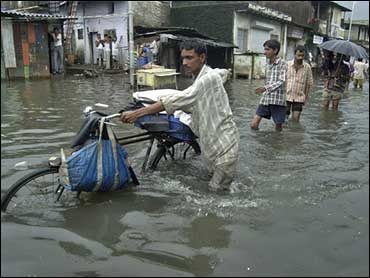 The new rains, which began early Sunday, badly hampered cleanup efforts and the distribution of food to needy residents.

"The bodies are still coming out. There will be another 100 or so," said K. Vatsa, state rehabilitation secretary. "The toll will definitely be around 1,000."

But incessant rain and mounds of debris, boulders and mud mixed with the remains of people's homes were making it difficult to retrieve the remaining bodies.

As many as 421 people were killed in Bombay alone — most of them drowned, buried by landslides, or electrocuted.

Civic authorities deployed health workers in the city's suburbs to distribute medicines and disinfectants to guard against the spread of waterborne diseases.

"We're asking people to travel only if essential," said Bombay police chief A.N. Roy. Schools were ordered closed in Bombay and three other districts due to flooding in low-lying areas.

Despite Sunday's rain, electricity was gradually being restored to many northern Bombay neighborhoods a day after angry demonstrators blocked traffic demanding restoration of tap water, power and the cleanup of garbage and decomposing animal carcasses.

Residents in five Bombay neighborhoods shouted anti-government slogans and demanded an immediate cleanup. Some shielded themselves from the rain with plastic sheets, while others simply got drenched as they demonstrated outside civic offices.

"For so many days we have been lifting the bodies of the dead and now we are clearing animals from the roads. Is this our work?" asked a furious Hafeez Irani, his face covered with a handkerchief against the stench.

"The drains are choked. We still have no electricity," said Irani, a construction worker. "We have these handkerchiefs on all the time."

Civic leaders pleaded for patience. They said equipment and workers needed to clear roads and drains were being called in from other areas hit by landslides.

The government issued orders to stop all construction in the city so trucks could be used to transport garbage, debris and animal carcasses, mostly of cattle that can be found wandering in most Indian cities.

Despite renewed warnings from authorities to evacuate, residents in shanties built into small, crumbling hills in the city's northern neighborhoods say they have no place to go.

"We came from the village because there is no work there. This is our home now," said Sakina Yusuf, a housemaid with three children. "I know they say it's unsafe ... but move where?"