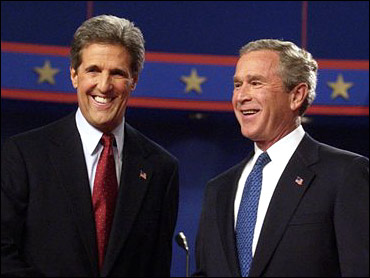 
In the spin room, most of the talk was about John Kerry, not President Bush.

Democrats said Kerry had hit a home run and spoke of a race transformed. Republicans countered — as they had for months — that Kerry had thrown too many wild pitches.

"We saw someone who looked like and acted like a president that happened to be the challenger to the president," said Kerry campaign aide Tad Devine. The president, he said, "offered nothing new to the American people."

"Expect this race to be really close in a very short time," Devine said.

Democratic chairman Terry McAuliffe said Kerry had made his position on terrorism "very clear," something with which Bush strategist Karl Rove — standing almost back to back with McAuliffe — disagreed.

Rove and other Republican surrogates in the media center repeated their charge that Kerry has vacillated on important policy questions.

"I think he realized he needed to resolve his contradictions and tonight he did not. He added to them," Rove said.

White House communications director Dan Bartlett said the debate "was the time for (Kerry) to close the credibility gap on Iraq."

"He just made the problem worse," Bartlett said.

And contrary to Devine's prediction of a shift in the race, Republicans foretold little change. Campaign manager Ken Mehlman reminded reporters that in 2000, "instant polls" pointed to Al Gore winning the first debate, but Mr. Bush pulled ahead a few days later.

The media center for the debate occupied a spacious floor of the University of Miami fitness center, where weight machines had given way to long rows of tables with Internet hookups and phones.

The spin room was in an adjoining area about the size of a basketball court,
where Democratic and Republican surrogates moved about trailed by hordes or smatterings of reporters.

Inside the room, the focus was as much on style as substance.

"I said several times, 'Spectacular answer,'" McAuliffe said, adding: "I think as soon as the debate opened up, George Bush lost it."

"I think he made a very strong case. I mean, the case makes itself," said Kerry surrogate Gen. Merrill McPeak. "Anybody who's in touch with the real world would know this is a mess."

Bush surrogates sought their ammunition in the details: Republican boss Ed Gillespie chided Kerry for not using the word "terrorism" when identifying the most serious foreign policy challenge facing the United States.

Bartlett faulted Kerry because "He didn't even know that Poland was part of the invading force" in Iraq.

As they had before the debate, Bush surrogates played up Kerry's forensics skills.

"John Kerry is a good debater," Gillespie said. "He's been training for this all his life."

Mr. Bush, on the other hand, is one to mangle a syllable now and then," Gillespie said.

Whether the debate itself or the spinning makes any difference could be clear when the first post-debate polls come in. History offers an uneven guide.

According to CBS News polls, 56 percent of those surveyed thought Al Gore was the winner of the first 2000 debate. But among all registered voters, Gore's lead actually slipped after the first debate.

President Clinton was picked by more respondents as the winner of both 1996 debates but neither shifted the polls. The first debate in 1992 did not help Mr. Clinton much, but boosted Ross Perot the expense of the first President Bush. That Mr. Bush was seen as the winner of both his 1998 debates with Michael Dukakis, and his poll ratings rose with each meeting.