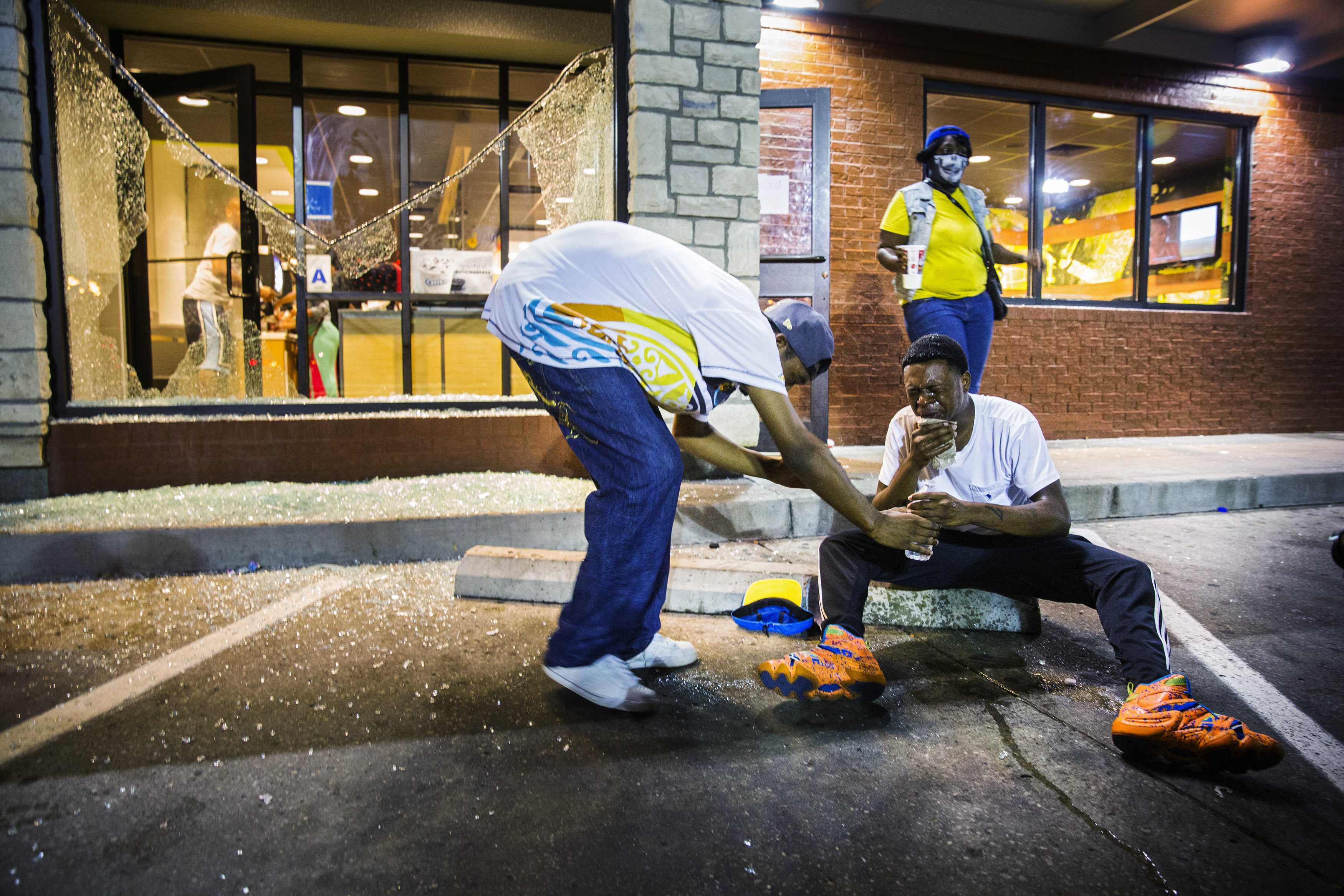 FERGUSON, Mo. -- Missouri Gov. Jay Nixon has called out the National Guard after another night of trouble in Ferguson, Missouri, and the first guard members were showing up on the city's streets early Monday.

Police used tear gas to clear protesters off the streets late Sunday, a week after demonstrations over the fatal shooting of unarmed black teenager Michael Brown by a white police officer filled the St. Louis suburb with angry, defiant crowds.

Missouri State Highway Patrol Capt. Ron Johnson, whose agency was put in charge of security in Ferguson by Nixon, told reporters early Monday that police had to respond after shots were fired at them and others and several locations were looted or vandalized, including a McDonald's where employees felt the need to lock themselves in a storage room for their safety.

Johnson said Molotov cocktails, bottles and other objects were thrown at police.

At least two injuries resulted from the gunshots, Johnson said, but no officers were hurt. Several people were arrested.

Johnson blamed the latest trouble on a small group of people intent on causing it.

Three hours before a midnight curfew imposed by Nixon, officers in riot gear ordered all the demonstrators to disperse. Many of the marchers retreated, but a group of about 100 stood defiantly about two blocks away until getting hit by tear gas.

Protesters laid a line of cinder blocks across the street near the QuikTrip convenience store that was burned down last week. It was an apparent attempt to block police vehicles, but the vehicles easily plowed through. Someone set a nearby trash bin on fire, and gunshots rang out several blocks away.

Within two hours, most people had been cleared off West Florissant Avenue, one of the community's main thoroughfares. The streets remained empty as the curfew began. It remained in effect until 5 a.m.

Nixon's office announced early Monday that, "A day of hope, prayers, and peaceful protests was marred by the violent criminal acts of an organized and growing number of individuals, many from outside the community and state, whose actions are putting the residents and businesses of Ferguson at risk. ... Given these deliberate, coordinated and intensifying violent attacks on lives and property in Ferguson, I am directing the highly capable men and women of the Missouri National Guard to assist ... in restoring peace and order to this community."

There was no immediate indication of how many guard personnel would be involved.

The local school district announced early Monday that the opening of the school year, already postponed several times, was again being put off. The latest opening date had been Monday but, the district said, schools would remain shut "due to continuing unrest in some areas of Ferguson, and in the interest of the safety of students and families." No new opening date was announced.

The examination was to take place as soon as possible, Fallon said.

The results of a state-performed autopsy would be taken into account along with the federal examination in the Justice Department investigation, Fallon said.

A preliminary private autopsy found that Brown was shot at least six times, including twice in the head.

The two pathologists hired by the Brown family's attorney to conduct the private autopsy -- Dr. Michael Baden, a former New York City chief medical examiner, and professor Shawn Parcells, a pathologist from Kansas -- said that one of the bullets entered the top of Brown's skull, suggesting that his head was bent forward when he suffered a fatal injury.

Parcells said a bullet wound to his arm may have happened when he put his hands up, "but we don't know."

Forensic pathologist Shawn Parcells said a graze wound on Brown's right arm could have occurred in several ways. He says the teen may have had his back to the shooter, or he could have been facing the shooter with his hands above his head or in a defensive position.

The two pathologists said the reason for there appearing to be more than six wounds on Brown's body is that at least two of the bullets apparently caused multiple entry wounds.

The two likely kill shots against Brown hit him in the head, the pathologists said. One of the family's attorneys, Darryl Parks, said the fact that one of the kill shots hit him in the top of the head at a "back-to-front" trajectory means "the officer should've been arrested."

"Why would he have been shot in the very top of his head, a 6-foot-4 man? It doesn't make sense," Parks said.

Dr. Lawrence Koblinsky, a forensic science expert and a professor at John Jay College of Criminal Justice, told "CBS This Morning" that probably the most important detail from the release is that Brown was shot entirely in the front of his body.

"That is, the story of the eyewitness, the friend of Michael Brown, Dorian Johnson, was that he had been running away from the vehicle and a shot was fired. That apparently is false. He was not shot in the back," Koblinsky said.

The forensic scientist also said it is important to note where exactly Brown was first shot.

"It's my opinion that seeing four shots to the right arm was an indication to me that the police officer wanted to stop him," Koblinsky said.

However, Koblinsky added later that "six shots is five shots too many," because officers should be better trained at stopping suspects without lethal force.

The Justice Department already had deepened its civil rights investigation into the shooting. A day earlier, officials said 40 FBI agents were going door-to-door gathering information in the Ferguson neighborhood where Brown was shot to death Aug. 9.

A federally conducted autopsy "more closely focused on entry point of projectiles, defensive wounds and bruises" might help that investigation, said David Weinstein, a former federal prosecutor who supervised the criminal civil rights section of Miami's U.S. attorney's office. The move is "not that unusual," he added.

Federal authorities also want to calm any public fears that no action will be taken on the case, Weinstein said.

Earlier on Sunday, Johnson said he had met with members of Brown's family and the experience "brought tears to my eyes and shame to my heart."

"When this is over," he told the crowd at a rally held at a local church, "I'm going to go in my son's room. My black son, who wears his pants sagging, who wears his hat cocked to the side, got tattoos on his arms, but that's my baby."

Johnson added: "We all need to thank the Browns for Michael. Because Michael's going to make it better for our sons to be better black men."

The Rev. Al Sharpton told the rally Brown's death was a "defining moment for this country."

Sharpton said he wants Congress to stop programs that provide military-style weaponry to police departments. He said he expects police to "smear" the slain teenager, his family and his attorneys. He also condemned the recent violence and looting in Ferguson.

The protests have been going on since Brown's death heightened racial tensions between the predominantly black community and the mostly white Ferguson Police Department, leading to several run-ins between police and protesters and prompting the governor's move to put the state highway patrol in charge of security.

Ferguson police waited six days to publicly reveal the name of the officer and documents and a video alleging Brown robbed a convenience store shortly before he was killed. Police Chief Thomas Jackson said the officer did not know Brown was a robbery suspect when he encountered him walking in the street with a friend.

Nixon said Sunday on ABC's "This Week" that he was not aware the police were going to release the surveillance video from the store where Brown is alleged to have stolen a $49 box of cigars.

"It's appeared to cast aspersions on a young man that was gunned down in the street. It made emotions raw," Nixon said.

Police have said little about the encounter between Brown and the officer, except to say that it involved a scuffle in which the officer was injured and Brown was shot. Witnesses say the teenager had his hands in the air as the officer fired multiple rounds.

The officer who shot Brown has been identified as Darren Wilson, a six-year police veteran who had no previous complaints against him. Wilson has been on paid administrative leave since the shooting, and the department has refused to say anything about his whereabouts. Associated Press reporters have been unable to contact him at any addresses or phone numbers listed under that name in the St. Louis area.

Also Sunday, about 150 people gathered in St. Louis to show support for Wilson. The crowd protested outside a TV station because it had broadcast from in front of the officer's home.

The St. Louis Post-Dispatch said the station, KSDK, later apologized. Others in the group, composed mostly of police and relatives of officers, carried signs urging people to wait for all the facts.