NEW YORK - Ask any college student sitting through a lecture on macroeconomics and they'll tell you, money matters can be pretty complicated. What started out as simple bartered exchanges -- your cow for my barley -- evolved over centuries into a complex system governed by central banks, interest rates and fickle markets.

There are some who think the world sits at the precipice of a new phase of economic evolution -- one in which digital currencies hold the potential to help redefine the concept of money.

"We never ask ourselves, 'What is money?'" said Alex Palantzas, a financial analyst and the business development director at the Bitcoin Center in New York City's Financial District. "It's simply a way to measure value, when we have a voluntary exchange."

Now that society has moved from gold and cash to credit cards and new innovations like Apple Pay, many -- including Palantzas -- believe that the role of digital currencies such as Bitcoin will only grow.

"The main issue for me, with how money works now, is that people are exposed to the mistakes of other people -- of bankers," said Palantzas. "The idea behind digital currency is to preserve your own savings [and] the biggest difference with digital currency is that they are decentralized, most of them."

Digital currencies are also popping up in different, and sometimes novel, ways.

"So much of our money is like made up in the stock market -- digital currency is a natural evolution of what's been happening for thousands of years since humans started trading beads and food and things like that," said Mary Arturi, whose husband recently launched a new digital currency with a team of 11 others. It's called Emrals and Auriti designed its logo.

She described Emrals as a currency for civic good, exchanged in the service of cleaning up city streets.

"Everyone loves New York and we pay tons of money to live here," said Arturi on a recent windswept winter's day. She looked down at the dirt pile she had just started to tackle. "And its like - it's a mess," she laughed.

Arturi explained how Emrals is a "gamified currency," exchanged on the Emrals website to make civic duties like cleaning public spaces a fun, inclusive task, not just an activity for "do-gooders."

On the site, 100 Emrals cost 99 cents and people pay into the system to post a so-called "dirt alert," flagging an area -- in their neighborhood or elsewhere -- that needs cleaning. The person who accomplishes the task first can pocket the Emrals online and then transfer the amount into dollars. The payouts vary based on the scope of each "dirt alert" job.

Bitcoin is the most powerful digital currency, rising to fame after the March 2013 Cypriot banking crisis, when the government of Cyprus mandated that banks impose losses on their shareholders, costing a lot of people a lot of money. Consequently, some Cypriots invested in Bitcoin because banks couldn't inflate its value.

While paper money is printed by the government, Bitcoin is "mined" from a specific type of database, known as block chain technology, by automated "minebots." Once extracted from the code, Bitcoins can be traded from one person's digital wallet to another's. The database is programmed to release no more than 21 million Bitcoins, ever. The value of Bitcoin, unlike Emrals, is not contingent on the dollar or any other traditional currency and its value relative to them has fluctuated significantly in the roughly two years since it gained international notoriety.

"It's been a dollar, it's been less, it's been nothing, it's gone up to $1,200, and it's moved around ever since," Nick Spanos, director of the Bitcoin Center in New York, told CBS News.

Defining Bitcoin is hard, even for Spanos, because it took the standard concept of money and mixed it with technology.

"It's actually going back to the ancient concept of money that emerged spontaneously, it was not centralized," said Palantzas. He explained how Bitcoin, echoing an ancient definition of currency, aspires to be "consistent, convenient, divisible, durable and valuable."

"Last century we observed the centralization in the definition of money," Palantzas said. "In the United States of America, in the 1970s they completely disconnected gold from the dollar. The dollar is still the reserve currency of the world, but it is not scarce."

For digital currency enthusiasts like Palantzas and Spanos, technology is the solution to contemporary issues with money, like governments de-valuing paper currencies and failed banking systems.

"How can something have value if its constantly printed? Our technology is light years' ahead of the stock exchange," said Spanos. "I believe that since people do have even more knowledge [online] nowadays, they wanna know what's happening with their money.

Despite the optimism, traditional currencies aren't going anywhere, and the future of digital currencies isn't clear. Some people look at Bitcoin as an experiment that's not practical because its value is so unpredictable.

But for Palanztas, the future looks bright:

"In the case of Bitcoin, you can use your phone to send money anywhere in the world, without bank costs," said Palantzas. "I've heard about smart watches that could be equipped with Bitcoin so trading money can be used anywhere...it's a commodity [that] gives you complete control of your own savings."

"We're the future of money." 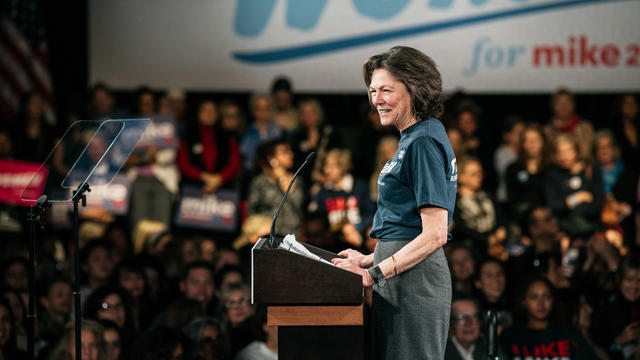