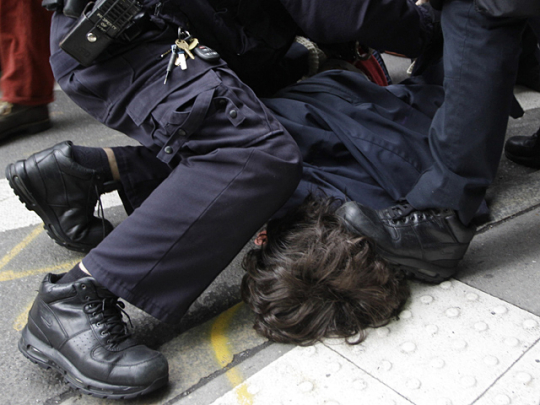 COMMENTARY Confronted by two topless young women taking part in the Occupy Wall Street protests in New York today, several police officers responded by whipping out their own tools of the trade -- nightsticks.

In a fracas that typified the tense atmosphere across lower Manhattan, the women were roughly pushed around the sidewalk along Broadway in front of famed Trinity Church, while some protesters were knocked down, said two people involved in the incident. Put another way, boobs were met with batons.

There were other reports of police violence Thursday amid crowds that some media outlets put in the thousands. Some of these altercations, such as the one above, seemed unprovoked. Others appeared touched off in part by protesters removing barricades erected to control the demonstrations. But in both cases the level of violence suggested, at best, indiscipline by individual cops and at worst official license to cause bodily harm.

Video: Arrests made during Occupy Wall Street's "Day of Action"Video: "Occupy Wall Street" - Police clash with protesters - (Raw Video)Occupy clashes on Wall Street in day of action"Occupy Wall Street" protesters vow to keep fighting
At least 175 people were arrested during the protest, with some participants bearing the wounds to prove it. Reported the NYT in describing one clash in Zuccotti Park, which protesters had "occupied" for two months until police cleared it out this week in an early morning raid:

A line of police officers wielding batons pushed into the crowd near Cedar Street, but after a moment those officers were directed backward by Joseph J. Esposito, the chief of the department.

But before Chief Esposito directed the police back, several officers could be seen shoving and punching protesters and journalists.

Such unnecessary force has become a feature of law enforcement operations against the Occupy movement in recent weeks. Scott Olsen, a former U.S. Marine and Iraq war veteran, suffered a fractured skull and brain injuries in October after being hit by a tear gas canister or rubber bullet reportedly fired by Oakland police. At the University of California-Berkeley, campus police also are under investigation for allegedly roughing up students and faculty (as seen in this video) at an Occupy rally earlier this month. And in Seattle this week, an 84-year-old community activist, a priest and a pregnant teenager were pepper-sprayed.

Such tactics have drawn fire not only from Occupy Wall Street and civil libertarians, but also from law enforcement experts. Here is what Norm Stamper, who was the police chief in Seattle during the chaotic anti-World Trade Organization protests in 1999, recently had to say about police violence in the latest uprising:

More than a decade later, the police response to the Occupy movement, most disturbingly visible in Oakland -- where scenes resembled a war zone and where a marine remains in serious condition from a police projectile -- brings into sharp relief the acute and chronic problems of American law enforcement. Seattle might have served as a cautionary tale, but instead, U.S. police forces have become increasingly militarized, and it's showing in cities everywhere: The NYPD "white shirt" coating innocent people with pepper spray, the arrests of two student journalists at Occupy Atlanta, the declaration of public property as off-limits and the arrests of protesters for "trespassing."

One Occupy-affiliated protester in New York, who said he was a former NYPD officer, echoed this theme of an increasingly aggressive, militarized police prone to responding to mostly peaceful protests with inappropriate force. The police are "jacked up" to crack down, he told me.

Why the whole world can't watch

A related, and equally disturbing, aspect of the police violence against the Occupy movement in New York are the numerous reports of media censorship around these events. For instance, journalists trying to cover the operation to clear Zuccotti Park this week were barred from entering the plaza where occupiers were being arrested. Some reporters themselves were arrested. Adds The Guardian:

As police swooped on the park in the early hours of Tuesday, the city closed airspace in lower Manhattan to prevent news helicopters taking aerial shots of the scene. Vans were used to obscure views of the park and a police cordon effectively blocked accredited media from reaching the site. Some of those members of the press who were in the park or were able to get there say they were arrested, pepper sprayed or treated aggressively.

You don't have to share the protesters' ideology to oppose police brutality and media blackouts. And for New York Mayor Michael Bloomberg -- himself a creature of, and apologist for, Wall Street -- such tactics can only taint his political legacy. If he has aspirations beyond City Hall (and there's strong reason to believe he does), Bloomberg's recent actions in suppressing OWS may doom them.

Of course, these protests may end up alienating some New Yorkers. For those who work around Wall Street, mobs are no doubt an inconvenience. But such annoyances are peanuts compared with the economic and political problems this movement has thrust into view. And that you can't knock out with a billy club.

Another fund linked with investment guru to close
Alain Sherter