To be FIRST AMONG SECONDS sounds logically impossible. Not so for the members of one hardworking comedy troupe, now marking its 50th anniversary. Our Cover Story is reported by contributor Nancy Giles:

They all came from Second City, a powerhouse of comedy theatre.

Full disclosure: I was in the Second City touring company back in 1984. (I wasn't exactly in the "who's who" category.)

They've been knocking 'em dead for half a century at Second City, 50 laugh-a-minute years that have spawned two resident companies, four touring companies, and theatres in Chicago and Toronto.

"It's like doing Shakespeare, really," said Andrea Martin, who performed both on stage, and starred in "SCTV," the comedy series created by Second City in 1976.

"It's like doing Shakespeare 'cause you think, 'Think of all the people that have come before me and I'm saying those words.' And it somehow bolsters you and makes you feel part of an instant family."

So, what makes a great Second City actor?

It all started in Chicago, the "Second City," the Windy City, in a converted Chinese laundry in 1959.

Some twenty years earlier, in the 1930s, Viola Spolin had the idea to use improvisational games to teach immigrant kids to communicate. Her son, Paul Sills, put those games on stage, and improv comedy was born. 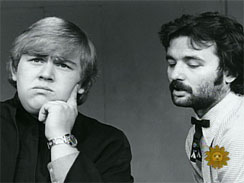 (CBS)
"Second City has defined a process for making funny," said Kelly Leonard, Second City's executive vice president. "And what we do is we create 'triple threats.' We create actors who can write, who can perform, and who can improvise."

(Left: John Candy and Bill Murray, part of the Second City comedy troupe in the 1970s.)

In the '60s and '70s, Second City's political irreverence and spontaneity attracted a lot of attention. Film writer and director Harold Ramis ("Groundhog Day") came to Second City in 1969. He recalls, "Abbie Hoffman used to improvise with us, during the conspiracy hearing."

"No," Ramis laughed. "He was a little self-centered. But he did manage to sleep with all the women!"

One of the keys to successful improve is sharing the spotlight.

"I now tell film students, and acting students, 'Identify the most talented person in the room. And if it's not you, go stand next to them.'

"As opposed to competing with him?" Giles said.

"Yeah, or John Belushi. How can I [stand] with John on stage, total force of nature? You didn't go up against it. My thought was, well, how can I serve this amazing talent?" 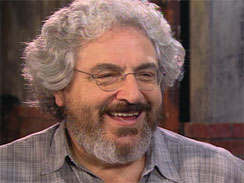 (CBS)
Ramis (left) served that talent by writing blockbuster comedies, including "Animal House," "Ghostbusters" and "Caddyshack," which he also directed.

"I had Bill Murray for six days. I knew he was the best improvising actor in America. So I thought, I'm just gonna let him talk. So there are scenes, the fully improv'ed scene in the movie is one of the most popular comedy scenes of the last 30 years. Cinderella story in "Caddyshack."

"That was all improvised?"

"I'd never done characters," said Martin Short, who began at Second City in 1977 on the Toronto stage, where he learned to invent characters - zany characters, like the nerdy oddball Ed Grimley.

Of course, Second City isn't just a star factory: It's a $30 million a year business that goes well beyond the box office.

There are improv classes with more than 2,000 students. There's a summer camp for kids.

And there's Second City Communications, where troupe members help launch new products and spice up business meetings and events with a little improv.

In some ways, Second City is just a big school, and like students in high school or college, performers only stay at Second City for three or four years before they move on.

Fame doesn't come at Second City . . . it only comes afterward, if at all.

"We're not trying to own those people forever," said Kelly Leonard, "even though we've helped hone their careers and train them, at a stage when no one knew who they were."

And what those 50 years have shown is that Second City . . . is second to none.