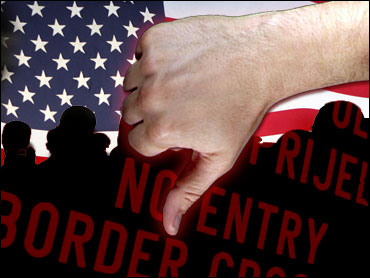 
Before we get too far past it, some thoughts on the immigration reform bill that went down in flames last week.

The people who killed it – the politicians and the screamers on the left and the right – were calling that some kind of victory. Sorry. The legislation that went down had been loaded up with so much stuff it wasn't much of a bill anyway and probably should have been defeated. But what happened last week was no victory for either side or anyone.

It was just one more example of a White House that has frittered away its power and influence and a Congress that can no longer confront the nation's problems head-on and do anything about them.

Opponents killed the legislation, but there are still 12 million illegal immigrants in the country.

Any suggestions on what to do with them?

Opponents killed the legislation, but the security along our borders is still dangerously ineffective. Does anyone on either side believe that is a good thing? Opponents killed the legislation, but the kind of highly-educated, foreign-born specialists we need are still having a hard time getting work permits, and the hard-working immigrants who want to become good citizens will still find it difficult to realize their dream. What's to brag about that?

When nothing gets done, the politicians can always blame the other side. The bad news for the rest of us is the problem is still there.