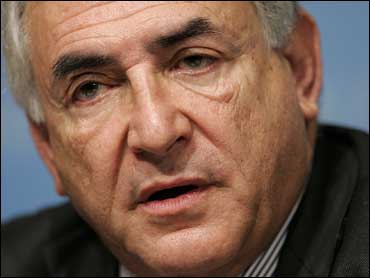 The head of the International Monetary Fund will remain in his job after the agency's executive board concluded that there is no cause for dismissal over an extramarital relationship.

The IMF board issued a statement late Saturday saying that the actions of IMF Managing Director Dominique Strauss-Kahn were "regrettable and reflected a serious error of judgment."

However, the 24-member board of directors decided that Strauss-Kahn's relationship with the former IMF employee was consensual and did not involve any type of sexual harassment, favoritism or any abuse of authority.

The board, which represents all 185 member-nations of the lending institution, reached its conclusions at the end of a daylong meeting at IMF headquarters in Washington.

The IMF is expected to play a critical role in providing loans to countries harmed by the current global financial crisis.

In a statement, the board said that based on the findings of an outside law firm hired to investigate the matter and discussions Saturday with Strauss-Kahn, that they now consider the incident closed.

Shakour Shaalan, the dean of the executive board, told reporters during a conference call that the board believed that the incident would not harm Strauss-Kahn's effectiveness going forward.

An investigative report by the law firm of Morgan, Lewis & Bockius said the two IMF employees acknowledged that there was "consensual physical relationship of short duration in January 2008."

The former employee with whom Strauss-Kahn had the affair has been identified as Piroska Nagy, now in London with the European Bank for Reconstruction and Development.

The incident involving Strauss-Kahn occurred 15 months after Paul Wolfowitz resigned as president of the World Bank amid controversy over a pay package for his girlfriend, a bank employee. The World Bank is a sister lending institution to the IMF.

In a statement released with the board's findings, Strauss-Kahn, who became the IMF's 10th managing director a year ago, called what he did a "serious error of judgment" but said he was grateful that the board had found that he had not abused his authority.

"I very much regret this incident, and I accept responsibility for it," Strauss-Kahn said in his statement. "I have apologized for it to the board, to the staff of the IMF and to my family. I would also like to reiterate my apology to the staff member concerned for the distress this process has caused."