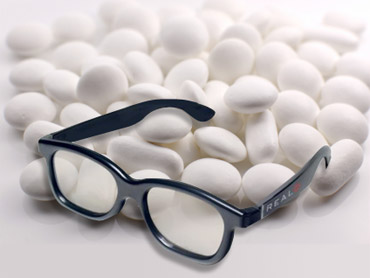 NEW YORK - From Hollywood studios to Japanese TV makers, powerful business interests are betting 3-D will be the future of entertainment, despite a major drawback: It makes millions of people uncomfortable or sick.

Optometrists say as many as one in four viewers have problems watching 3-D movies and TV, either because 3-D causes tiresome eyestrain or because the viewer has problems perceiving depth in real life. In the worst cases, 3-D makes people queasy, leaves them dizzy or gives them headaches.

Researchers have begun developing more lifelike 3-D displays that might address the problems, but they're years or even decades from being available to the masses.

That isn't deterring the entertainment industry, which is aware of the problem yet charging ahead with plans to create more movies and TV shows in 3-D. Jeff Katzenberg, CEO of Dreamworks Animation SKG Inc., calls 3-D "the greatest innovation that's happened for the movie theaters and for moviegoers since color."

Theater owners including AMC Entertainment Inc. and TV makers such as Panasonic Corp. are spending more than a billion dollars to upgrade theaters and TVs for 3-D. A handful of satellite and cable channels are already carrying 3-D programming; ESPN just announced its 3-D network will begin broadcasting 24 hours a day next month.

Yet there are already signs that consumers may not be as excited about 3-D as the entertainment and electronics industries are.

Last year, people were willing to pay an additional $3 or more per ticket for blockbuster 3-D movies such as "Avatar" and "Toy Story 3." But that didn't help the overall box office take: People spent $10.6 billion on movie tickets last year, down slightly from the year before. People went to the theater less, but spent more.

3-D TV sets were available in the U.S. for the first time last year, but shipments came in below forecasts, at just under 1.6 million for North America, according to DisplaySearch. Nevertheless, TV makers such as Samsung Electronics Co. and Panasonic are doubling down on 3-D and introduced more 3-D-capable models this month at the International Consumer Electronics Show in Las Vegas. Those models cost more than regular ones and require glasses, just like in theaters.

Research into how today's 3-D screens affect viewers is only in its early stages. There have been no large-scale scientific studies.

A study of 115 South Koreans watching 3-D screens close up found that 3-D caused more eyestrain than 2-D. The research prompted the Korean government to recommend that viewers take a break of up to 15 minutes after an hour of 3-D viewing. But that study was based on glasses with red and green lenses rather than the ones used in theaters and with TVs.

Based on an unscientific, online survey, the American Optometric Association estimates that 25 percent of Americans have experienced headaches, blurred vision, nausea or similar problems when viewing 3-D.

TV makers do their own testing, but don't publish results. Samsung warns on its Australian website that its 3-D TVs can cause "motion sickness, perceptual after effects, disorientation, eye strain, and decreased postural stability." The last part means viewers risk losing balance and falling.

"We do not recommend watching 3-D if you are in bad physical condition, need sleep or have been drinking alcohol," the site continues.

3-D screens and glasses create the illusion of depth by showing different images to each eye. That simulates the way objects that are at different distances in real life appear in slightly different places in each eye's field of view.

That's enough for most of us to perceive a scene as having depth. But our eyes also look for another depth cue in a scene: They expect to need to focus at different distances to see sharply.

More specifically, our eyes track an approaching object by turning inward, toward our noses. Bring something close enough, and we look cross-eyed. 3-D screens also elicit this response when they show something approaching the viewer.

The problem is that as the eyes turn inward, they also expect to focus closer. But a screen isn't moving closer, so the eyes have to curb their hard-wired inclination and focus back out. This mismatch between where the eyes think the focus should be and where the screen actually is forces them to work extra hard.

"That causes at least part of the discomfort and fatigue that people are experiencing," says Martin Banks, an optometry professor at University of California, Berkeley.

The problem is magnified if the screen moves close to the viewer - exactly what's happening if 3-D viewing moves from the movie theater to living rooms to game gadgets like the 3DS.

There is at least anecdotal evidence of a growing problem. David Hays, an optometrist in University Place, Wash., says patients came in after seeing "Avatar," complaining of eyestrain or the inability to see the 3-D effect. He expects to see more as the technology spreads.

Roger Phelps, an optometrist in Ojai, Calif., says viewers who suffer the most with 3-D are those who have trouble getting their eyes to converge properly in normal life.

"If you tend to get carsick easily, you might be one of those," Phelps says.

Yevgeny Koltunov, a 39-year-old New Yorker, has gone out of his way to find theaters showing 2-D versions of such movies as "Iron Man 2" and "Alice in Wonderland." His daughter, 13, also refuses to see 3-D movies.

"It doesn't look all that spectacular to me," Koltunov says. "For the most part, they give me a headache and make me dizzy, by the end."

No Holding Back on Special Effects

Moviemakers do hold back on 3-D effects to minimize eyestrain. "Avatar" avoided gimmicks such as objects suddenly appearing to jut out of the screen. Filmmakers also try to make sure that the most significant part of a scene, such as the lead actor's face, appear to be at the same distance as the screen. That way, the eyes are less confused.

But this approach also limits moviemakers' creative freedom, and it doesn't solve the eyestrain problem entirely.

Banks is working on a longer-term solution. He and his team at Berkeley's Visual Space Perception Laboratory have put together 3-D "glasses" - really, a desk-bound contraption - with lenses that accomodate the eyes' natural inclination to focus at different distances. He says the setup reduces eyestrain and mental fatigue from 3-D images, though it may not eliminate them entirely.

A reporter who tried the device found it provided a very lifelike illusion of a box coming toward him on a track.

At the University of Arizona, optical sciences professor Hong Hua is working on wearable, helmet-like displays that also allow the eyes to focus at different distances.

Commercial versions of these setups are at least several years away, and even then, are more likely to be professional tools for remote surgery or industrial design rather than consumer items.

Even further away is the prospect of live holograms, which could create 3-D images that could be viewed without glasses, from all angles.

Until then, Phelps recommends sufferers sit as far back as they can in 3-D theaters. Another solution: close one eye, or put a Post-It note over it like an eye patch. That way, 3-D goes back to being 2-D.

$30M Lawsuit Against MySpace Is Dismissed