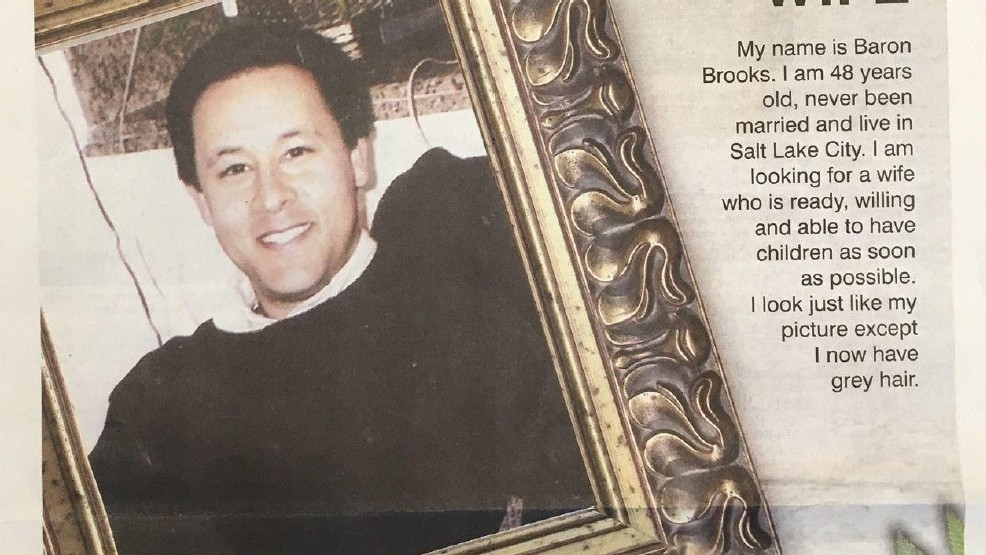 COEUR D'ALENE, Idaho - The father of a Salt Lake City businessman who placed an Idaho newspaper ad seeking women interested in marrying his 48-year-old son has received about a dozen inquiries.

Arthur Brooks had planned to meet potential candidates at a Coeur d'Alene resort, but son Baron Brooks told the Spokesman-Review on Sunday that its managers asked his father not to conduct interviews there after getting barraged with media requests.

"What am I supposed to do? He already did it," said Brooks. "No sense in defusing a bomb once it's already gone off."

He said about 12 women from around the U.S. expressed interest in the ad. Arthur Brooks will interview them in the coming weeks.

Baron Brooks, the owner of two health food stores, said his father, originally from Beverly Hills, California, is ill and wants a grandchild to carry on the family name.

Baron Brooks said he was initially shocked to see the ad.

The advertisement lists criteria for potential applicants, including age, height and political views.

"If you voted for Obama or plan to vote for Hillary you are not for me," the ad reads.

Brooks said his father is "neurotic" and "passive-aggressive," and compared him to Larry David's character in the TV series "Curb Your Enthusiasm."

"That's my dad: stumbles into stuff, has a loud mouth, thinks he does the right thing, and then it all blows up in his face," explained the younger Brooks. "He just does this crap. . If I shared some of the stories, you wouldn't believe it."

Brooks said his father recently vacationed in Coeur d'Alene and may have placed the ad in that paper because of the area's conservative politics.

Brooks, who is Jewish, said he is a political conservative.

"And most Jewish girls are quite liberal, and that doesn't work for me," he explained. "You probably are going to get more like a Midwest-type values in Idaho - somebody's who more right of center than you would, say, in Los Angeles."

He said he'd never buy an ad like this himself, but noted that it's "pretty well written."