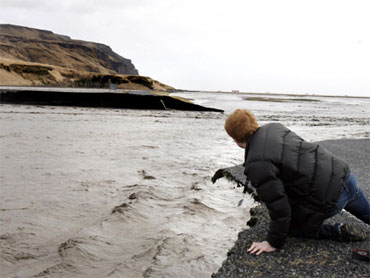 A volcano under a glacier in Iceland erupted Wednesday for the second time in less than a month, melting ice, spewing smoke and steam, closing a major road and forcing hundreds of people to flee rising floodwaters.

Authorities evacuated 800 residents from around the Eyjafjallajokull glacier as water gushed down the mountainside and rivers rose by up to 10 feet (3 meters).

Iceland's main coastal ring road was closed near the volcano, and workers smashed holes in the highway in three spots in a bid to give the rushing water a clear route to the coast and prevent bridges from being swept away.

Vidir Reynisson, a manager with Iceland's Civil Protection Department, said that by late afternoon the flooding appeared to have peaked.

"But the water is still flowing down to the ocean so it will be some hours before we have a better view of what kind of damage has occurred," he said.

See a webcam of the erupting volcano

Scientists said the eruption under the ice cap was 10 to 20 times more powerful than one last month, and carried a much greater risk of widespread flooding.

"This is a very much more violent eruption, because it's interacting with ice and water," said Andy Russell, an expert in glacial flooding at the University of Newcastle in northern England. "It becomes much more explosive, instead of a nice lava flow oozing out of the ground."

Civil protection official Agust Gunnar Gylfason said emergency workers rescued some 70 tourists and visitors trapped near the volcano since Wednesday morning. He said the party - including Norwegian visitors - are now safe in a tourist facility and officials are trying to transport them out of the area.

No lives or properties were in immediate danger, Gylfason said. Scientists said there was no sign of increased activity at the much larger Katla volcano nearby.

Iceland's Meteorological Office said a plume of steam rose at least five miles (eight kilometers) into the air. Scientists aboard a Coast Guard plane that flew over the volcano said the new fissure appeared to be up to 1.2 miles (2 kilometers) long.

There were no immediate signs of large clouds of volcanic ash, which could disrupt air travel between Europe and North America. Some domestic flights were canceled, but Iceland's international airport remained open.

The volcano, about 75 miles (120 kilometers) east of Reykjavik, erupted March 20 after almost 200 years of silence.

The original eruption petered out earlier this week. But Gunnar Gudmundsson, a geophysicist at the Icelandic Meteorological Office, said there were a series of tremors overnight, and rivers in the area began rising Wednesday morning - strong evidence of a new eruption under the glacier.

Last month's eruption struck near the glacier in an area that had no ice. Gudmundsson said the new eruption appeared to be about eight or nine kilometers (five to six miles) west of the original fissure.

"Most probably this eruption is taking place at the summit ... under the ice," he said.

Pall Einarsson, a geophysicist at the University of Iceland, said magma was melting a hole in the 650-foot (200 meter) thick ice covering the volcano's crater, sending floodwater coursing down the glacier into lowland areas.

Residents were evacuated to a Red Cross center in the nearby community of Hvolsvollur, the Civil Protection Department said.

Iceland, a nation of 320,000 people, sits on a large volcanic hot spot in the Atlantic's mid-oceanic ridge. Volcanic eruptions are often triggered by seismic activity when the Earth's plates move and when magma from deep underground pushes its way to the surface.

The last time there was an eruption near the 100-square-mile (160 square-kilometer) Eyjafjallajokull glacier was in 1821.

A bigger worry is Katla, which in the past has erupted in tandem with Eyjafjallajokull.

Katla is located under the vast Myrdalsjokull ice cap. An eruption could cause widespread flooding and disrupt air traffic between Europe and North America.

The last major eruption took place in 1918, and vulcanologists say a new blast is overdue.

"So far there have been no signs of the reawakening of the Katla volcano, but a lot of things can still happen, so we are monitoring it quite closely," Einarsson said.