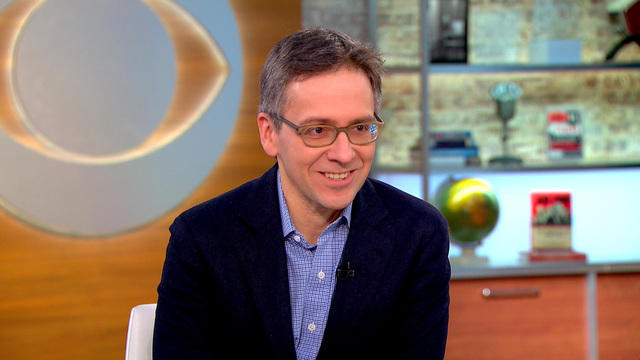 A new book, "Us vs. Them: The Failure of Globalism" by Ian Bremmer, looks at some of the consequences of increased international connections, growing nationalism around the world, and support for anti-establishment politicians.

In the book, Bremmer argues that disaffected voters are responsible for the rise of populists like Donald Trump, who won the U.S. presidency by promoting anti-establishment, anti-immigrant and anti-globalist sentiments.

He writes: "It's easy to find fault with populists like Trump. He's obnoxious, dishonest, and incompetent. But Donald Trump didn't create "us vs. them." "Us vs. them" created Donald Trump, and those who dismiss his supporters are damaging the United States."

Appearing on "CBS This Morning," Bremmer – a CBS News senior global affairs contributor and president of the Eurasia Group – said that Americans who have suffered from the rise in globalism should not be ignored.

Bremmer also emphasized the significance of millions of Americans who feel disconnected from the political process.

"The idea that we're going to blame people that voted for Trump as opposed to a much larger group of people that didn't bother to vote at all – 45 percent – as opposed to the much smaller group of Trump supporters, or that Hillary got? Or we're going to not blame the people that sat by and voted for establishment figures like the Clintons, like the Bushes for decades, while people in the country got so angry and so displaced they felt like the only thing they could do was vote for someone like Trump?"

Does he see a solution?

"The only place you don't see it is in Japan, where they don't take any immigrants and where the population is shrinking."

Co-host John Dickerson also asked Bremmer about the latest messages coming from North Korea about its nuclear weapons program and an upcoming summit with Presdient Trump.

"They are giving us a continued cease of testing both of ICBMs and nukes, we are giving them a summit; that is not new news," Bremmer said. "Both have been announced a month ago. It's been reiterated. They're talking about denuclearization. It's not actually going to happen.

"But I think Trump is one of those guys that, if he gets 5 percent of what he wants, his ability to spin that into, 'This is the best that humanity has ever seen and I deserve a Nobel,' is fairly high. So, it is getting progress, and I think at least in the near-term this is becoming a bigger opportunity."

Dickerson asked, "There is this red line of 'Do they have a nuclear program or not?' The administration has said they don't want them to have any nuclear program. So, can he still do the 5 percent end-zone dance if the nuclear program is still in existence in any form?"

"I think that Trump said a lot of things that he has changed his mind on once it becomes politically expedient, and this will be one of those things," Bremmer replied. "Remember, the Israel-Palestinian peace plan was one that he and Jared [Kushner] were going to do. I have not heard them discuss that in months now, because they've tilted towards North Korea. This is now the priority, and Kim Jong Un is playing a little ball with them, right?  So, I think the summit is going to happen."

He also noted the significance of CIA Director and Secretary of State nominee Mike Pompeo's recent trip to meet with the North Koreans.

"Pompeo was over there. He didn't make any demands of the North Koreans, which is another thing -- you see, they don't want to make it uncomfortable, make it easy for Kim Jong Un to come to this meeting, and announce they've done something that no other president has ever done: sat down with Kim Jong Un.  That's a big deal. Trump deserves a win for it. Let's hope he doesn't break it."

"Us vs. Them: The Failure of Globalism" by Ian Bremmer (Penguin) is available at bookstores Tuesday.

Lee Woodruff spoke to two famous and powerful women who say they are submissive in their marriages, but in a much different way