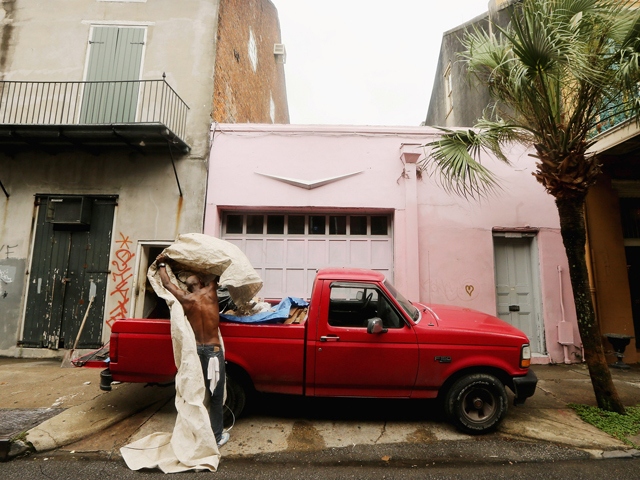 Isaac, a massive storm spanning nearly 200 miles from its center, made landfall at about 6:45 p.m. near the mouth of the Mississippi River. But it was zeroing in on New Orleans, about 75 miles to the northwest, turning streets famous for all-hours celebrations into ghost boulevards.

While many residents stayed put, evacuations were ordered in low-lying areas of Louisiana and Mississippi, where officials ordered the closure of the state's 12 shorefront casinos. By late Tuesday, more than 100,000 homes and businesses had lost power.

"On this course, the hurricane will gradually weaken. Its winds will come down," Rappaport said Tuesday night from the Miami-based center. He said gusts could reach about 100 mph at times, especially at higher levels which could damage high-rise buildings in New Orleans.

As Isaac neared the city, there was little fear or panic. With New Orleans' airport closed, tourists retreated to hotels and most denizens of a coastline that has witnessed countless hurricanes decided to ride out the storm.

"Isaac is the son of Abraham," said Margaret Thomas, who was trapped for a week in her home in New Orleans' Broadmoor neighborhood by Katrina's floodwaters, yet chose to stay put this time. "It's a special name that means `God will protect us'."

The storm drew intense scrutiny because of its timing — just before the anniversary of the hurricane that devastated that city, while the first major speeches of the Republican National Convention went on in Tampa, Fla., already delayed and tempered by the storm

"We don't expect a Katrina-like event, but remember there are things about a Category 1 storm that can kill you," New Orleans Mayor Mitch Landrieu said, urging people to use common sense and to stay off any streets that may flood.

Other officials, chastened by memories and experience, advised caution. Tens of thousands of people were told to leave low-lying areas, including 700 patients of Louisiana nursing homes. At least one tornado spun off of Isaac in Alabama, but there were no immediate reports of damage or injuries.

Many residents along the Gulf Coast opted to ride it out in shelters or at home and officials, while sounding alarm about the dangers of the powerful storm, decided not to call for the mass evacuations like those that preceded Katrina, which packed 135 mph winds in 2005.

"We don't expect a Katrina-like event, but remember there are things about a Category 1 storm that can kill you," Landrieu said, urging people to use common sense and to stay off any streets that may flood.

Isaac offers one of the first tests of a New Orleans levee system bolstered after the catastrophic failures during Hurricane Katrina. But calm prevailed in the city Tuesday as residents sized up the threat.

"I feel safe," said Pamela Young, who settled in to her home in the Lower 9th Ward -- a neighborhood devastated by Katrina -- with dog Princess and her television, waiting for the storm. "Everybody's talking `going, going,' but the thing is, when you go, there's no telling what will happen. The storm isn't going to just hit here."

Young, who lives in a new, two-story home built to replace the one destroyed by Katrina, said she wasn't worried about the levees.

"If the wind isn't too rough, I can stay right here," she said, tapping on her wooden living room coffee table. "If the water comes up, I can go upstairs."

On the "CBS Evening News," chief meteorologist David Bernard of CBS Miami station WFOR-TV said the tropical storm conditions are spreading not only the New Orleans area, but all across the Gulf Coast and the Mississippi, and also into Alabama. The latest advisory from the Hurricane Center has it as an 80 mph storm, about 100 miles southeast of New Orleans, and it's going to slowly move across the state Wednesday and then also into Thursday afternoon, shaping up to be a really slow mover.

In New Orleans, Landrieu insisted the city was ready, CBS News correspondent Byron Pitts reports. When asked about the comfortable and confident stance people have about the storm - and if that's a good place to be - Landrieu said, "I think what they're comfortable and confident in is that, given the level of this storm, that the levees can hold and we're not gonna have a Katrina event."

In Cocodrie, La., the biggest concern was the expected storm surge, CBS News correspondent Manuel Bojorquez reports. Two major flood gates meant to protect this coastal community are still under construction. One of them, the Houma Navigation Canal, won't be complete until next hurricane season. Everyone in the area is under a mandatory evacuation notice.

In Biloxi, Miss., CBS News correspondent Mark Strassmann reports Mississippi's construction standards could place some areas in real trouble. The city faces the northeast quadrant of Isaac, potentially the storm's most powerful and punishing side.

One study by the Insurance Institute for Business Home & Safety rated construction standards in 18 hurricane-prone states, from Maine to Texas. Florida scored high, a 95 out of 100; Louisiana, 73. But Alabama scored 18, and Mississippi scored the lowest - 4 out of 100.

CBS News correspondent Rebecca Jarvis reports Isaac could lead to an increase in gas prices between 5 cents and 10 cents in the next week. More than 40 percent of U.S. refineries are along the Gulf Coast, and about half of them are directly in the storm's path.

Many refineries are either shut down or are considering whether to stop production until the storm passes, Jarvis reports. Gas supplies are already 4 percent lower than normal this year because of the closure of six other refineries earlier this month.

"The optics of a split-screen of people in peril over here and people at a convention having fun is something they really don't want to face up to," Schieffer said on "CBS This Morning" Tuesday.

Possibilities include canceling more sessions, which was done on Monday when the storm was near Tampa, or only having Mitt Romney address Americans after being named the party's presidential nominee, Schieffer reports.

In Washington, President Obama urged Gulf Coast residents to listen to local authorities, saying in brief remarks at the White House that "now is not the time to tempt fate.

The president declared a state of emergency in Louisiana late Monday, more than 24 hours before the storm was expected to hit the Gulf Coast. The declaration makes federal support available to save lives, protect public health and safety and preserve property in coastal areas.

There was already simmering political fallout. Republican Gov. Bobby Jindal, who canceled his trip to the Republican National Convention in Tampa, Fla., said the Obama administration's disaster declaration fell short of the federal help he had requested. Jindal said he wanted a promise from the federal government to be reimbursed for storm preparation costs.

"We learned from past experiences, you can't just wait. You've got to push the federal bureaucracy," Jindal said.

In New Orleans' French Quarter, Hyatt hotel employee Nazareth Joseph braced for a busy week and fat overtime paychecks. Joseph said he was trapped in the city for several days after Katrina and helped neighbors escape the floodwaters.

"We made it through Katrina; we can definitely make it through this. It's going to take a lot more to run me. I know how to survive," he said.

Tourists seemed to be taking Isaac in stride.

Maureen McDonald of Long Beach, Ind., strolled the French Quarter on her 80th birthday wearing a poncho and accompanied by family who traveled from three different cities to meet her in New Orleans to celebrate.

"The storm hasn't slowed us down. We're having the best time."

"We just figured why not get the full New Orleans experience, hurricane and all," Bob McDonald said. As they walked through the French Quarter Tuesday morning, they took pictures of media trucks parked near Bourbon Street and businesses boarding up windows.

But farther east along the Gulf, veterans of past hurricanes, made sure to take precautions.

At a highway rest stop along Alabama's I-10, Bonnie Schertler, 54, of Waveland, Miss. Summed up her decision to leave her home on the coast for her father's home in Red Level, Ala. after hearing forecasters warning that the storm could get stronger and stall.

"A slow storm can cause a lot more havoc, a lot more long-term power outage, `cause it can knock down just virtually everything if it just hovers forever," she said.

Those concerns were reinforced by local officials, who imposed curfews in Harrison, Hancock and Jackson counties. The Mississippi Gaming Commission on Tuesday ordered the closing of all coast casinos, which are on or near the water.

"This storm is big and it's tightening up and it sat out there for 12 hours south of us and it's pushing that wave action in and there's nowhere for that water to go until it dissipates," said Harrison County Emergency Operations Director Rupert Lacy.

All along U.S. 90 in Harrison County, families stood at the edge of the waves to gawk. The Mississippi Sound, protected by barrier islands, is often as still as a lake, but Isaac began stirring breakers before dawn, as it pumped a storm tide toward the coast. Police struggled to clear public piers where water was lapping at the boards, and resorted to bullhorns to try to get sightseers to leave the beach. But people were still coming down to the edge to take a look around 2 p.m., as it began to rain heavily in Gulfport.

Closer to the beachfront in Pass Christian, Steve Ladner was waiting for customers at Martin's Hardware. The 80-year-old hardware store only had one wall standing after Katrina, but was rebuilt as part of a small shopping center in the western Harrison County town, where well-off New Orleanians have long maintained grand beach homes.

Ladner said business was strong from 8 a.m. to about noon, as he sold rope, lights, batteries and other hurricane supplies. "All hurricane sales final" said the sign on the counter. Business dried up quickly at midday. "It's over now," Ladner said.

Customers said they were staying, Ladner said, even though all of Pass Christian was included in a mandatory evacuation order that began at noon.

"It's good for business, but you don't want to make your money like this," Ladner said.

And in Theodore, Ala., 148 people had taken refuge in an emergency shelter set up at the town's high school by midday Tuesday, with minds focused as much on the past and the present storm.

Charlotte McCrary, 41, had spent the night in the shelter along with her husband Bryan and their two sons, 3-year-old Tristan and 1-year-old Gabriel. Charlotte McCrary said she spent a year living in a FEMA trailer after Hurricane Katrina, which destroyed her home, and said she still hasn't gotten back to the same place where she was seven years ago. She said memories of that time influenced her decision go to the shelter.

"I think what it is," Bryan McCrary said, "is it brings back a lot of bad memories."