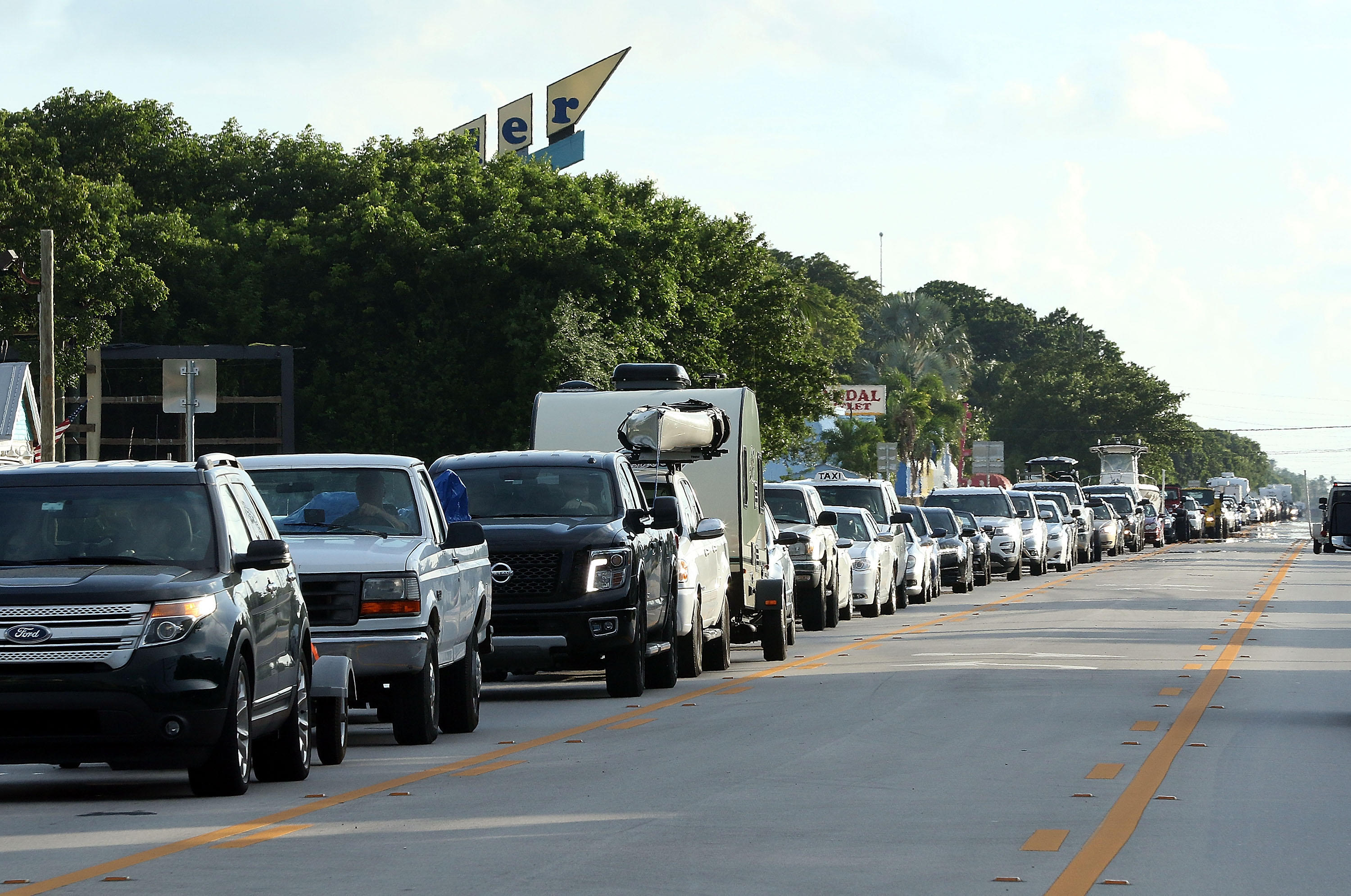 Broward County has ordered coastal evacuations, mandatory but with no enforcement, as is typical in Florida. Miami Beach has advised evacuating, but not made it mandatory for all areas.

Florida Gov. Rick Scott said anyone who intends to evacuate should "get out now."

However, with a storm track forecast up the middle of the state, it is unclear to many people where they should go.

In the Florida Keys, an island chain linked to the mainland only by one highway, visitors were instructed to leave Wednesday, and residents were ordered to leave starting Wednesday night.

Scott urged people to move quickly if they plan on evacuating, calling Irma a "life-threatening storm."

"Do not sit and wait for this storm to come," Scott said Wednesday. "Get out now."

Late Wednesday, Mayor Gimenez issued mandatory evacuation for zones A and B and the barrier islands. A map of evacuation zones can be downloaded here.

Former FEMA administrator Craig Fugate, who also led Florida's emergency management division during the 2004 and 2005 hurricane seasons, said the mixed messages and public confusion over whether to leave now or later is why everyone living on a coast should have an emergency plan and use it, well before it becomes too late.

"We know traffic is going to be horrendous," Fugate said. "The bigger problem is the people who wait."

Residents of the Florida Keys are known for riding out hurricanes, but with Irma's potentially catastrophic wind and rain set to crash through the low-lying island chain this weekend, not many seem willing to risk it this time.

Throughout Florida, officials and residents are making preparations, but forecasts indicate the Keys could take the country's first blow from the Category 5 storm. From Key Largo south to Key West, residents and officials said Irma is a storm that needs to be fled.

Keys officials announced a mandatory evacuation Wednesday for visitors, with residents being told to leave the next day. Scott, who plans to fly to the Keys on Wednesday, said a hospital in the island chain would have its patients evacuated by air.

"This is not one to fool around with," said Cammy Clark, spokeswoman for Monroe County, which contains the Keys.

In a Wednesday morning tweet, President Trump said his administration is closely watching Irma and his "team, which has done, and is doing, such a good job in Texas, is already in Florida." He added: "No rest for the weary!"

Janet Roberts, 51, was getting ready Tuesday to leave her mobile home community on Key Largo for her daughter's house 30 miles away in Florida City, which is the first city north of the Keys on the mainland.

"She lives in a complex and has hurricane shutters. At least we stand half the chance," she said.

She remembered how much damage Hurricane Andrew caused when its eye passed just north of Florida City in August 1992.

Throughout South Florida, officials readied evacuation orders and people raided store shelves, buying up water and other hurricane supplies. Long lines formed at gas stations and people pulled shutters out of storage and put up plywood to protect their homes and businesses.

Parker Eastin filled up his gas tank at a busy fuel station. He and his girlfriend said they decided to plan well in advance after seeing what Hurricane Harvey did to Texas.

"We ordered water off Amazon because the stores were out and also ordered food," said Eastin, a 43-year-old lawyer who has lived in Florida for 12 years. "Seeing the devastation in Texas is a sad reminder that you have to take the events very seriously."

The last major storm to hit Florida was 2005's Wilma, its eye cutting through the state's southern third as it packed winds of 120 mph. Five people died.

Scott declared a state of emergency in all 67 counties to give local governments "ample time, resources and flexibility" to prepare for the storm. Mr. Trump also approved a federal emergency declaration for the state ahead of the storm, according to the Federal Emergency Management Agency.

Scott warned that although officials don't know the storm's exact path, winds are likely to be "extreme and life-threatening" and impacts could be felt inland, away from the coast. He said Floridians need to follow any evacuation orders, and to "remember: We can rebuild your home; we cannot rebuild your life."

Gov. Henry McMaster declared a state of emergency in South Carolina for Hurricane Irma on Wednesday after the official forecasts for the storm shifted east, raising the chances of the first major hurricane strike for the state in almost 28 years. The declaration allows the state to begin certain preparations for an emergency and allows McMaster to use the National Guard if necessary.

"We got this," McMaster said Wednesday at an previously scheduled summit on the opioid problem. "We can't stop the hurricane. If it comes, it's going to be here, but we can be ready for it."

The last major hurricane to hit South Carolina was Hugo in September 1989 which came ashore just north of Charleston with winds of 135 mph.

Under a mandatory evacuation order, no one is forced by police or other government agencies to leave, but people who stay should not expect to be rescued if they are in danger, officials said.

The threat of the storm has put much of Florida on edge. School districts along the east coast and in South Florida canceled classes for later this week, as did universities and colleges in Miami-Dade. The governor also shut down all state offices starting Friday and urged state workers to volunteer at shelters that are expected to open.

As of 2 p.m. Wednesday, the center of Hurricane Irma was located about 20 miles east-southeast of St. Thomas in the U.S. Virgin Islands, located about about 90 miles east of San Juan, Puerto Rico, according to the National Hurricane Center. The storm was heading west-northwest at 16 mph with maximum winds of 185 mph.